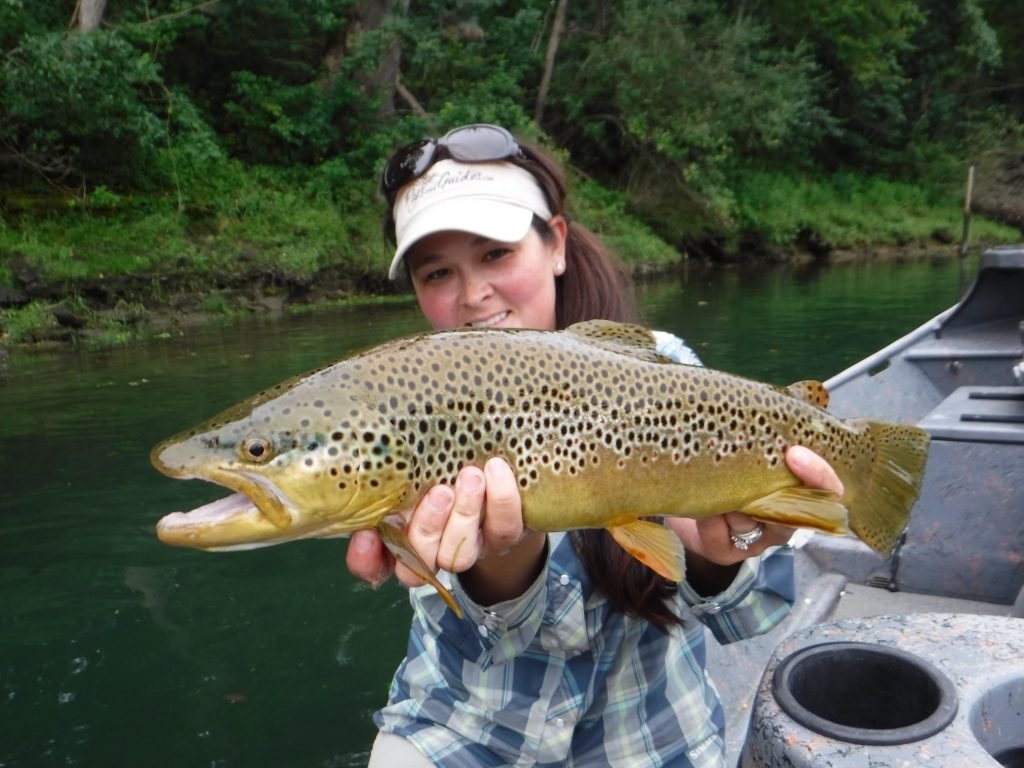 Water temperature at the School of the Ozarks 58.64 deg. F the Dissolved Oxygen level is near 5.6 mg/L 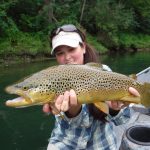 Lake Taneycomo has provided us with a few weekends of low water with zero generation along with one to two-unit water in the afternoons. During the week, we are typically seeing steady one-unit water all night and into the morning with pockets of two to three-unit water later on in the day, with an occasional no generation morning thrown in the mix. The water still remains stained from the recent floods, but with every day the water clarity is increasing and unfortunately with every day the water temp seems to be increasing and the dissolved oxygen levels are decreasing along with the lower generation. Bright attention-grabbing flies like the miracle fly, mega worms, and san juan worms in cerise, red, and fluorescent pink have been consonantly boating fish in one-unit water and midges in rust brown and olive are still doing the trick. In low water midges is various colors rust brown, black, and red all seem to be working in size 16 and 18 along with the mega worm, san juans in worm brown and various scuds. We are starting seeing a few browns which is pretty for the early party of August.

The latest flood around Memorial Day did move some gravel around on the bottom on upper Taneycomo, but not like we have seen in previous floods. The good news is the funnel below the boat ramp and above the KOA has a deeper more pronounced channel that is providing stronger current much like what we saw before the 2015 floods. Wooly buggers, small sculpin patterns, soft hackles, cracklebacks, scuds, san juan, and shammy worms are all working in the right scenarios in this area.

As the summer rolls on we are finally starting to see a few fish looking up and with every trip the hopper bite is steadily increasing. Pink and brown Fat Alberts in size 6 and 8 are working when fishing top water. Fishing around structure is defiantly bringing a new twist to upper Taneycomo since the flood we are seeing greater number of Kentucky bass almost a regular on our trips with a few perch scattered in.

Stay updated about our activities, articles, and tips.

Get updated with our activities in our facebook page

Sign up and get updated from Flys and Guides with our newsletters.

Sign up and get updated from Flys and Guides with our newsletters.

It's that time of the year where BIG BROWN trout start looking up and eating bugs. First insect that comes off is the caddis. This fly kit comes with everything you need to get the job done. These are "staple" proven patterns that are geared towards these Arkansas fisheries. So I've kept the guess work out of the equation. Just know from my experience, if you fish deep water throw the emergers, fish shallower water, fish the dry!!

Kit of the Month | White River

During this time of year this kit works everywhere, but more geared towards Arkansas's watershed. I'm always trying to fish this time of year either on Norfork, but if they are running big water I'll shift to the White River. I put a lot of thought into these kits strictly to keep the guess work to a minimum so you can spend more time catching instead of fishing.

Hey, don't miss out on our latest articles, reports, and tips! Sign up below and receive latest from us.