Reports From The Field - Jeremy Hunt

It was a late start to what looked like “Perfect Streamer Weather” on Thursday. Kyran arrived late at Copper John’s Resort Wednesday night from a 10-hour drive from Texas so rest was key.

Jeremy was still packaging and tying orders up from when he was out of town on the last run to the White. We got on the water around 11 am and ran Cotter to Crooked Creek, despite the reports I had read the night before about muddy water we still made the journey downstream.

Kyran had just got a big order in of CJ Sluggo’s and variations of the original from a sale Dally’s Fly shop ran back in January and he was anxious to try them out and I was pretty excited to see what they would do as well, since this is not a pattern I keep in my streamer box.

So with fresh snow on the ground and sleet coming down, it took a few hours and a few streamers that fell to the victim to the river bottom and overhanging trees but Kyran was finally back in the zone.

It was a cold slow day for us only one take which in the end came on a smaller 4-inch Olive/Yellow Double Deceiver. We ran back up to Wildcat and fished back to almost Cotter and called it a day.

Kyran and I hit the water a little before 8 am the next day and got a few hours in before the sun got too bright.

We scooped up Beth, Kyran’s girlfriend with hopes of getting her on her first trout on the fly after the morning chill lifted off the water.

We loaded up and headed back up to the dam to find a spot in line.

I noticed some guys waving me down in a Gaston’s boat mid river so I motored up and realized it was my trip for the following day.

Shane had forgot his 20lb Mono back at camp and I was happy to get him back in the game. 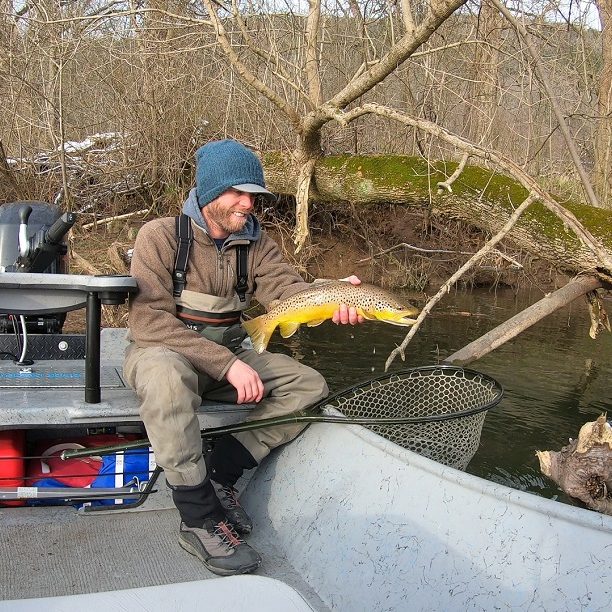 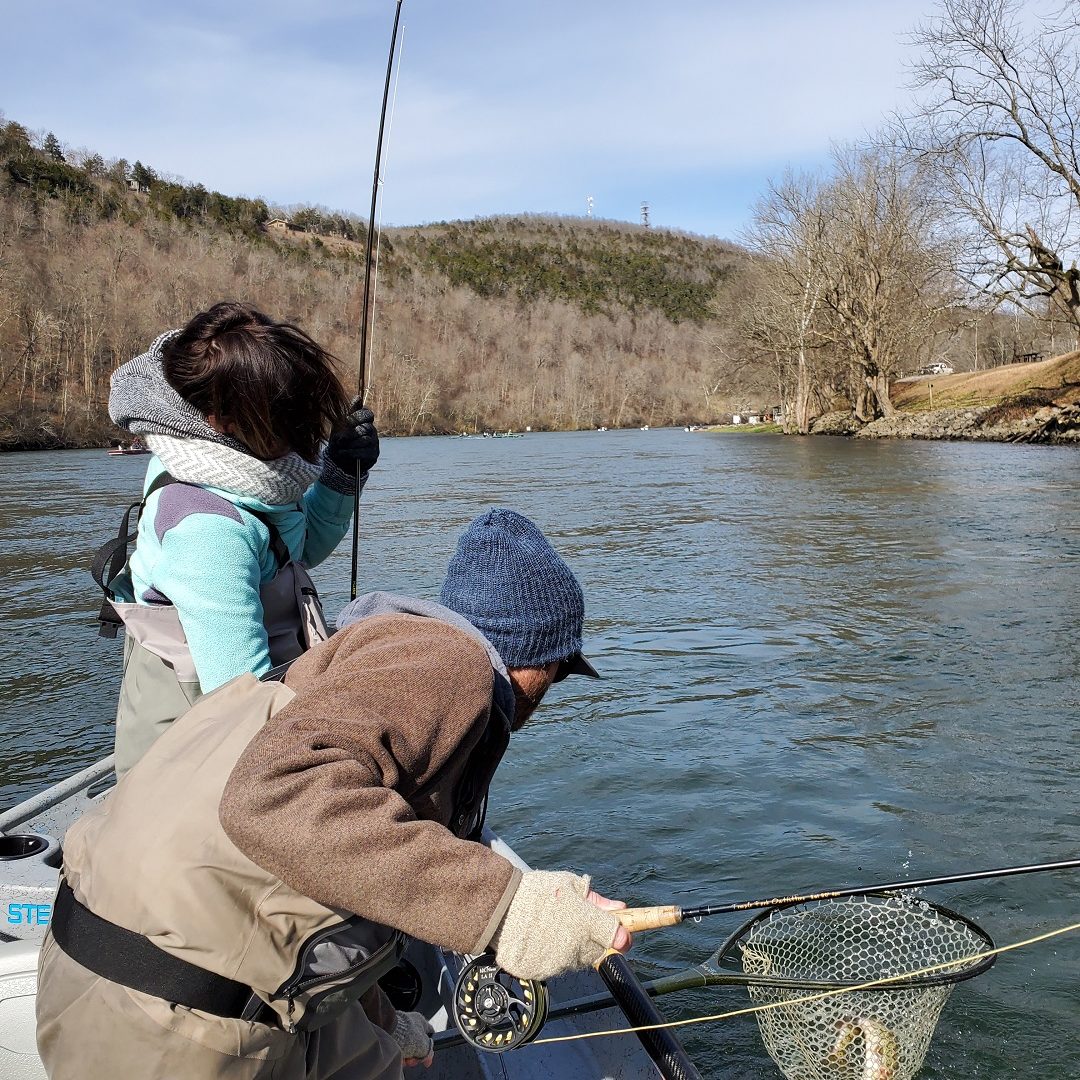 We all made our journey back upstream and made a few more drifts.

Kyran found a Brown and Beth can mark catching a trout on a flyrod off her bucket list.

Marcus landed a few with Jeremy which was nice since he hasn’t been on the White in over two years.

They asked the question of how all three of them were going to fit in my boat.

I laughed and motored away thinking those silly guys…. surely, I’m not taking three people.

Soon we were in the action I stuck with the cerise micro worm and the Oregon cheese Miracle fly that has been producing the last few weeks.

As the bite slowed, I switched to the Fl. Pink micro and a smaller golden nugget bling egg and that kept us in the game.

We met up with Jeremy and Marcus down at Cane Island when they finally made it into town.

They were down a streamer rod and wanted some of the extra Arkansas beadheads that I had tied up for Duane Bell the night before. 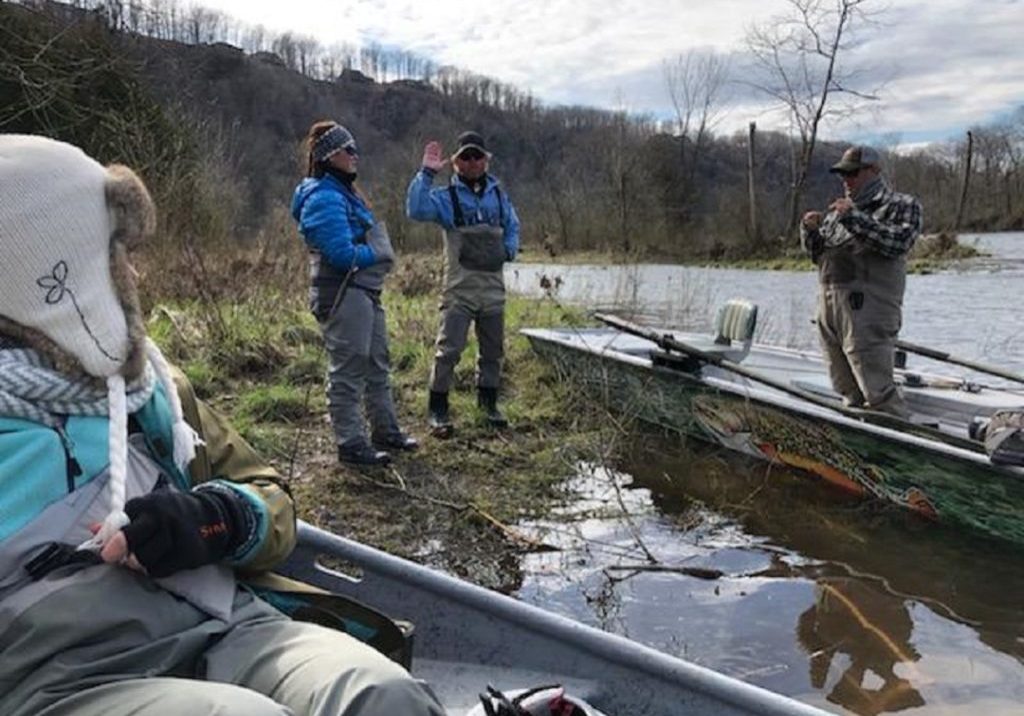 The Oklahoma boys were back in town, equipped with their Kayaks and small motors but with the heavy flows coming out of Bull Shoals they decided to rent a boat from Gaston’s for a day and then get a guide for another.

Jeremy was out with Kyran and Marcus on Saturday so that left me next in line.

I met Shane, Chad, and Julian outside the camper around 8:30 and we dropped the boat in soon after. 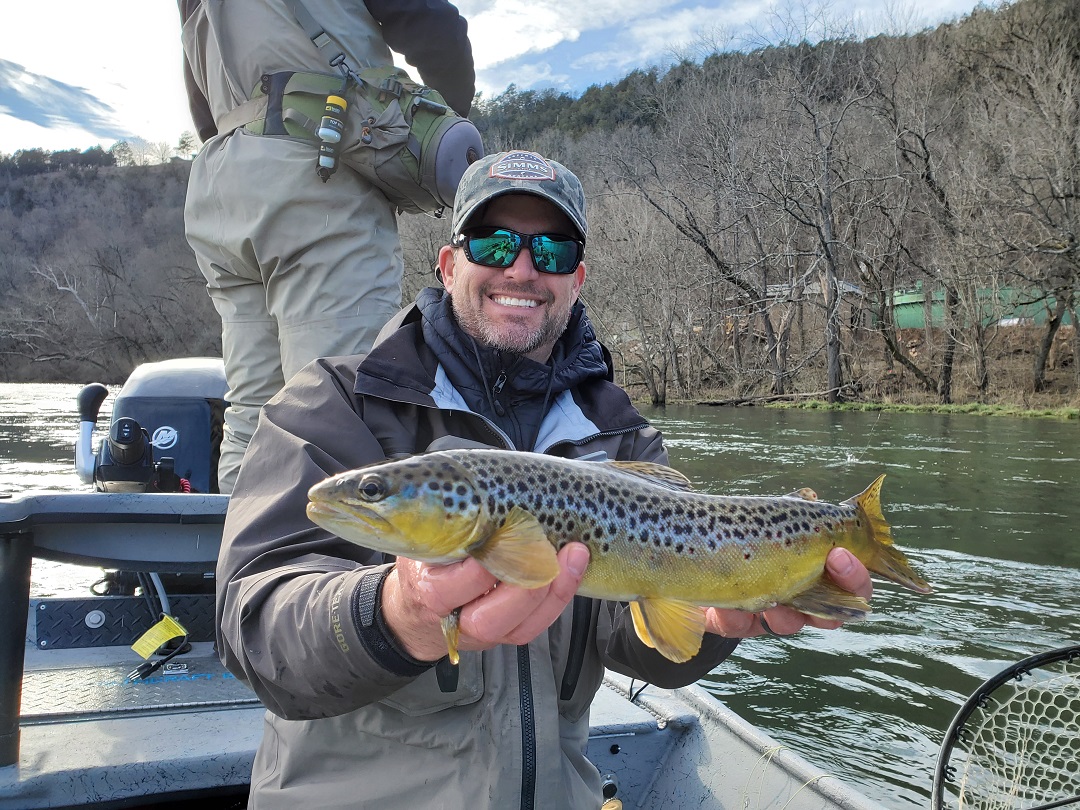 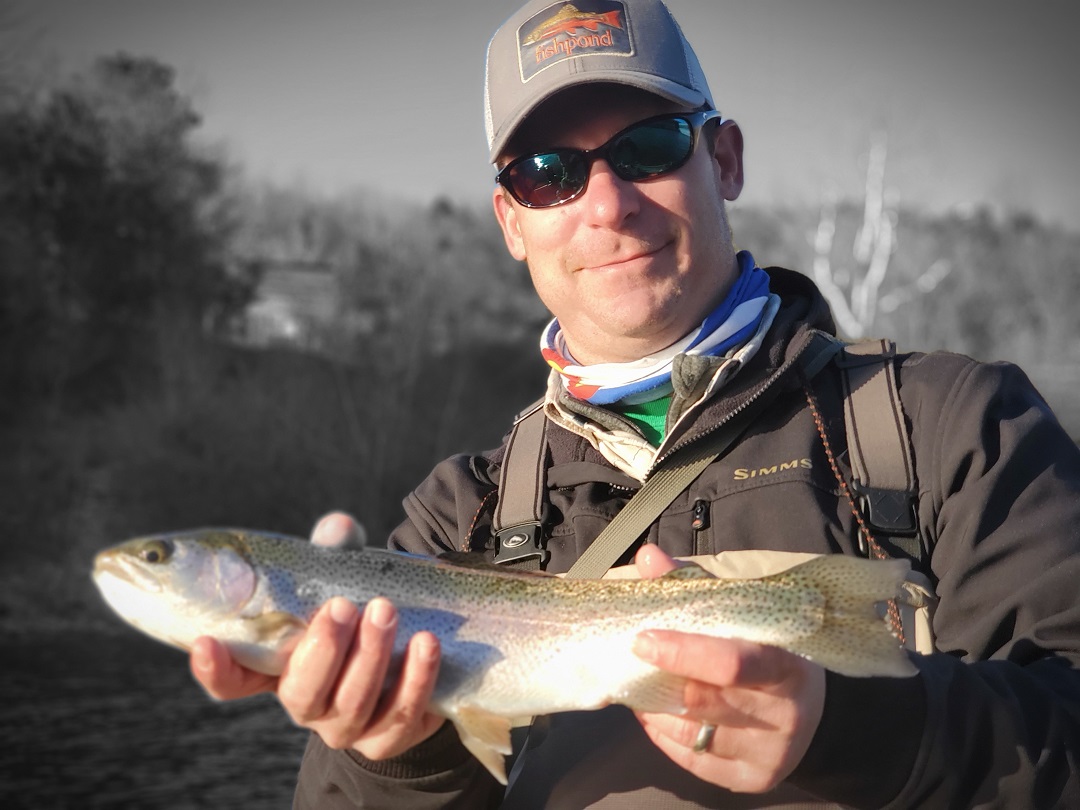 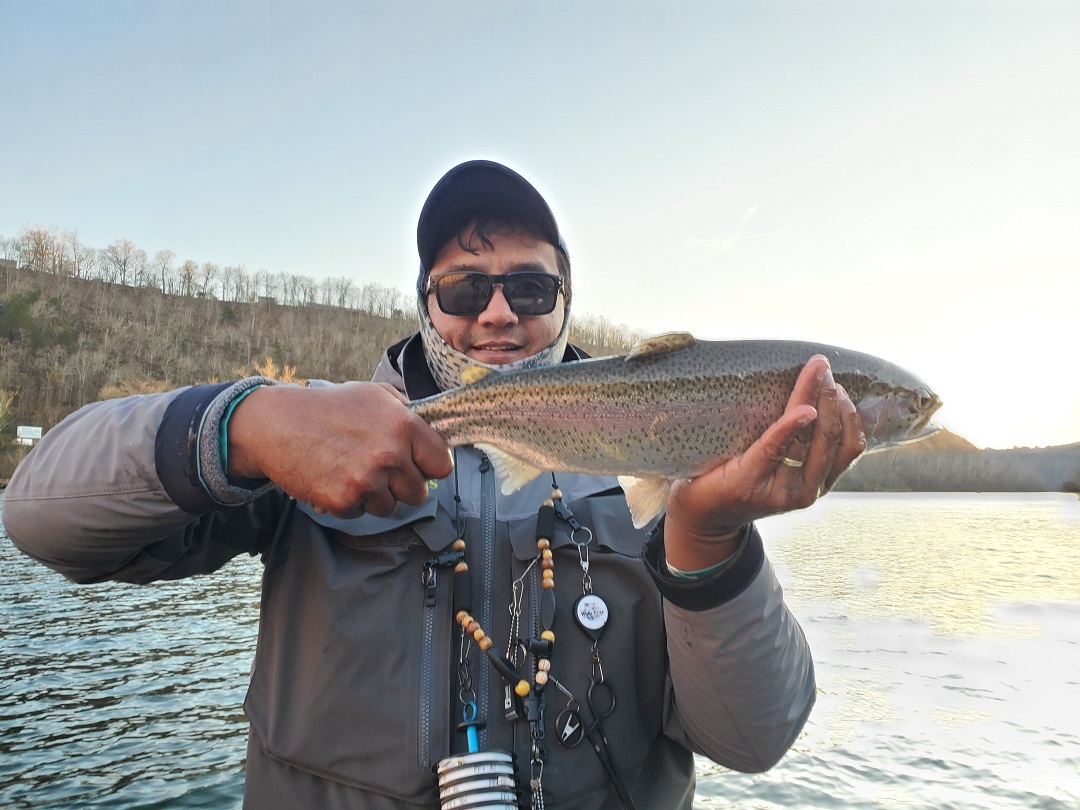 The Power Drifter was packed up to say the least. Sixteen feet gets pretty snug when you put three full grown men and myself in it, plus all the gear.

She was a bit slow pushing against 16,000 cfs and despite looking like a party barge moving up river we made it work.

As in all three person trips we tell everyone only two can fish at a time and as in all guide trips with Shane, he just smiles and does his own thing and the three fished the entire time. 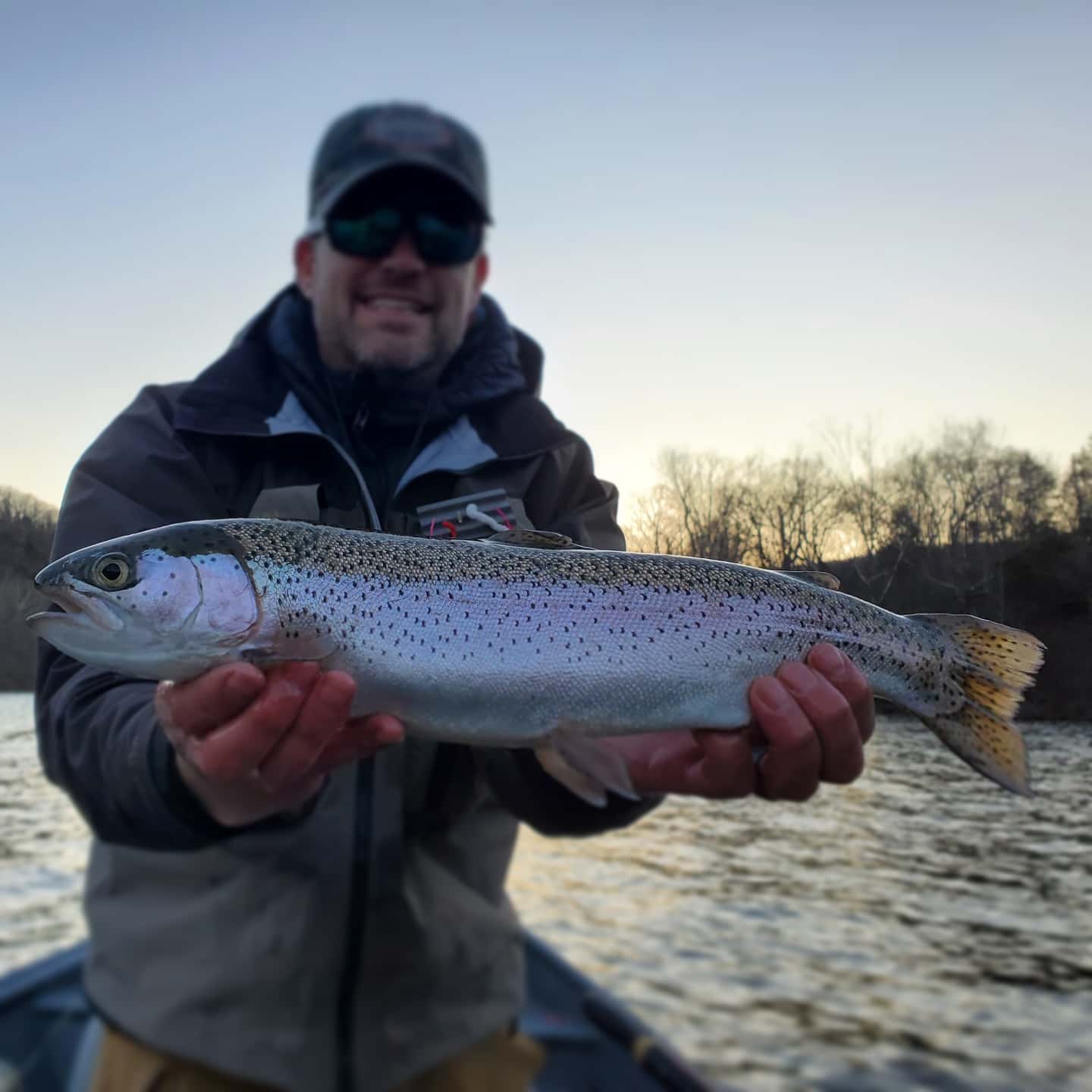 We ended up fishing all the way till dark and the boys only had a 30 min spell where the lines started crossing and knots increased significantly.

Communication is key and for the most part and you can tell these guys have hours of fishing alongside each other.

Shane and Chad used several smaller flies in the slack water both Shane’s Tungsten Midge and the RS2 was getting the job done.

Chad pulled out a fly that his son tied that resembled a Rainbow worrier and it managed to get a few dropped off an Oregon Cheese Egg until it finally broke off.

We were able to get a small brown on the cerise worm.

In the final hours of the trip I set Julian up with the peach mega worm and the size of the rainbows increased significantly.

After a few of those came to the boat Shane was digging in the boxes and put on the Chartreuse and shortly after Chad had to get in on the fun as well.

Everyone was able to get some quality sized bows when the day was done. 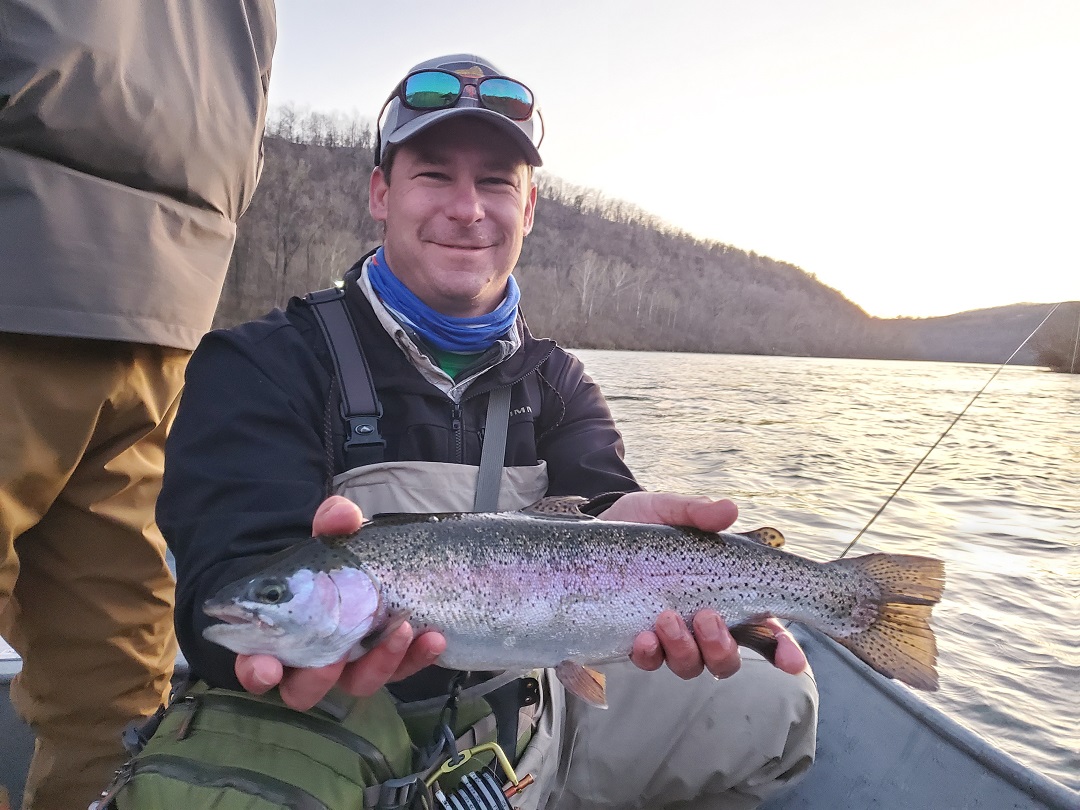 Chad had to head back home Saturday night, leaving Julian and Shane behind.

Julian wanted a streamer trip but after the last couple of hours we had the night before they wanted to get in on some more of those fat bows.

Trip started at 9 we did manage to bring a few to the boat using the same tactics but nothing like the night before so we rigged back up and made a few drifts to State Park with little success.

We decided it was time to start the streamer trip and when we made it around the corner going into state park the wind and white caps started.

The power drifter was blowing back upstream at times, casting was difficult so we ran back up and found some slack water and areas were the wind was blocked by the bluffs.

We drifted heavy white jigs and the Arkansas Bead head along with the heaviest split shot we could find and was able to find some fat bows in the current. 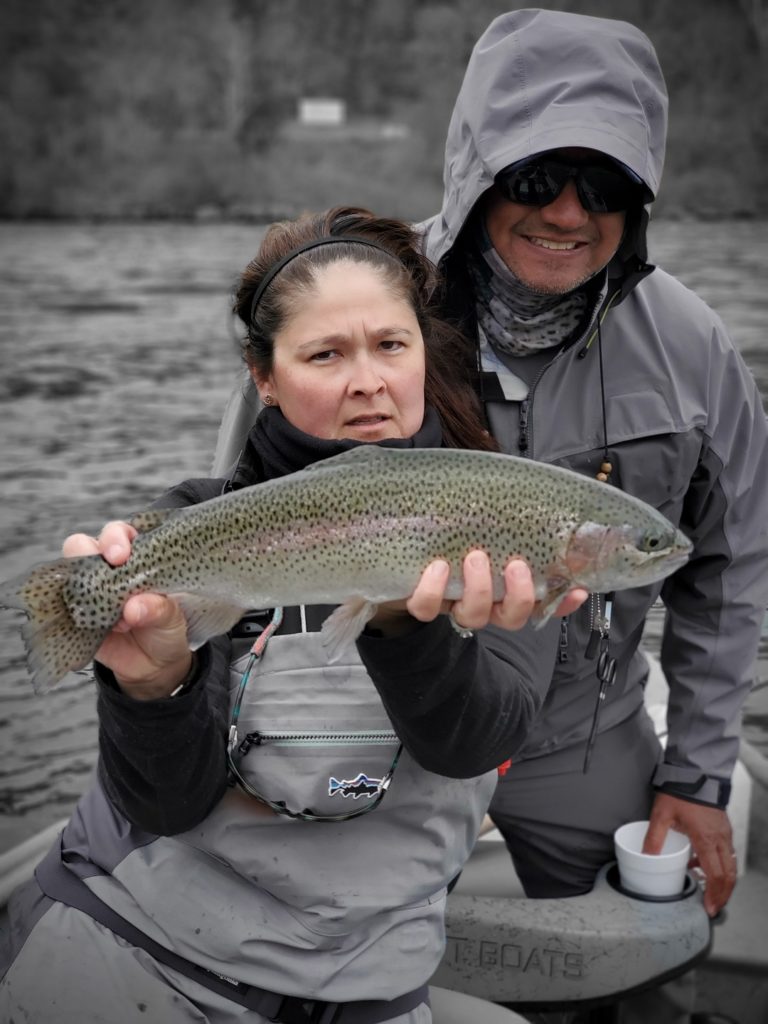 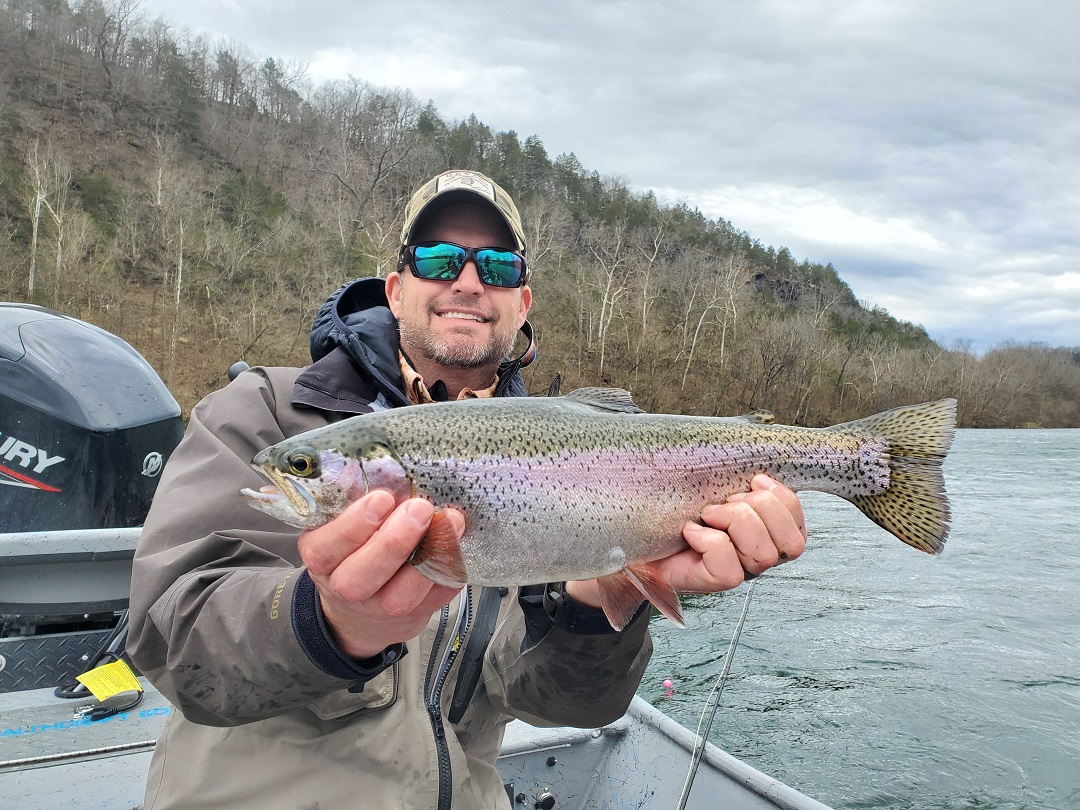 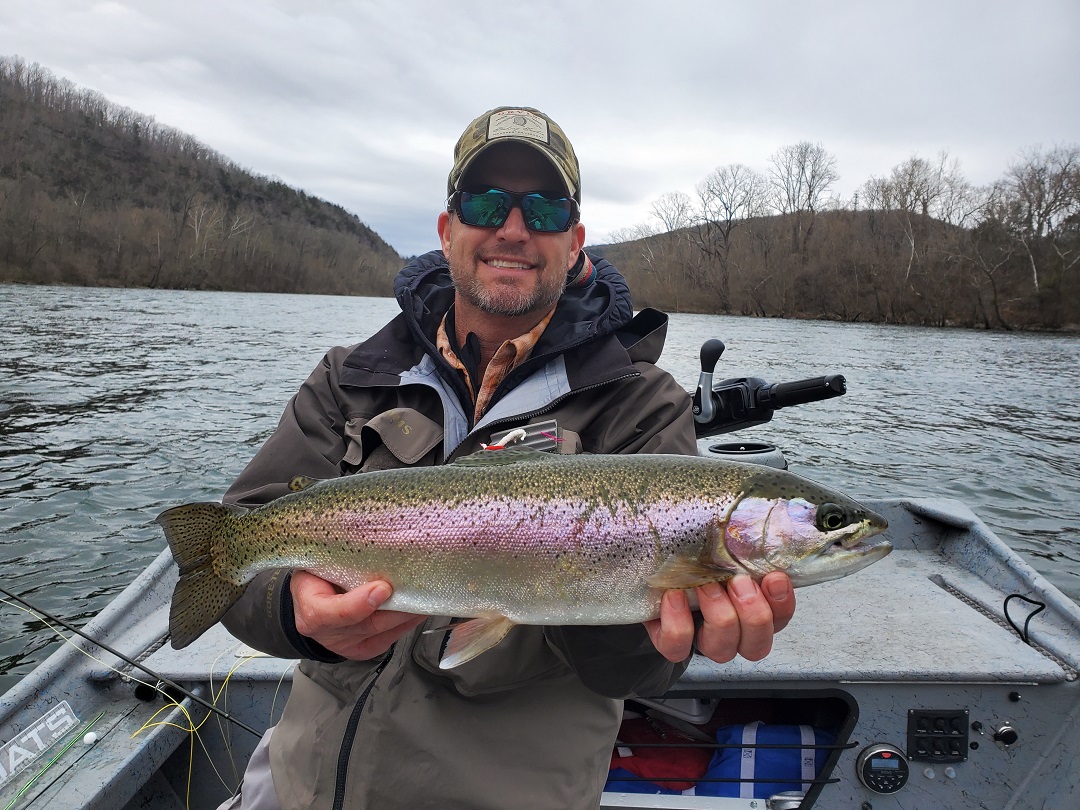 Finally, around 2pm the winds just stopped the clouds rolled in the rain started and we were in the perfect conditions we had hoped for the entire day.

We finally started our streamer trip with only hours to spare.

We stuck with smaller streamers had several follows a few takes and just as many trout sets later, they were in the strip set mind set and we were in brown town!

Shane fished the skull head double deceiver, white/yellow peanut envy, white Silk Kitty, all with some success as far as takes, but came up with a good brown on a Brent Dawson tied single hook olive streamer.

If you have ever seen anything that Warpath Flies puts out you know your going to be dredging bottom if you don’t get a concussion in the process. 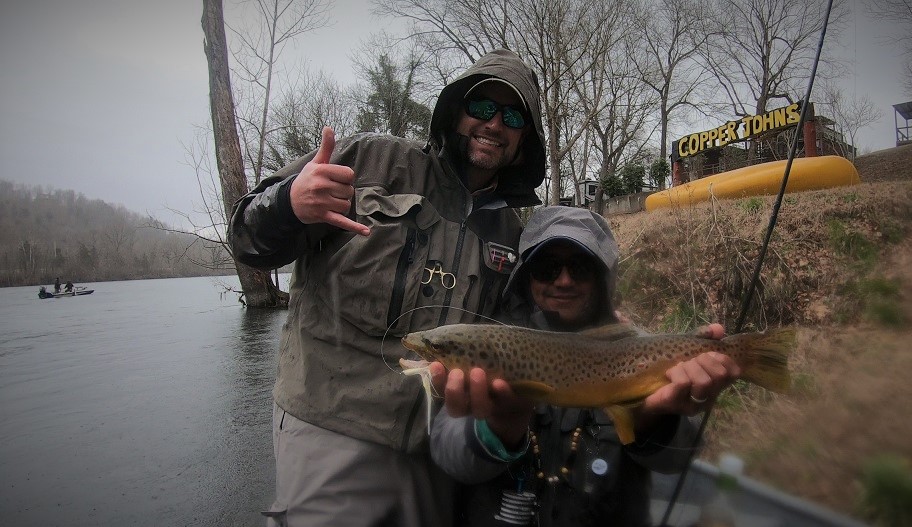 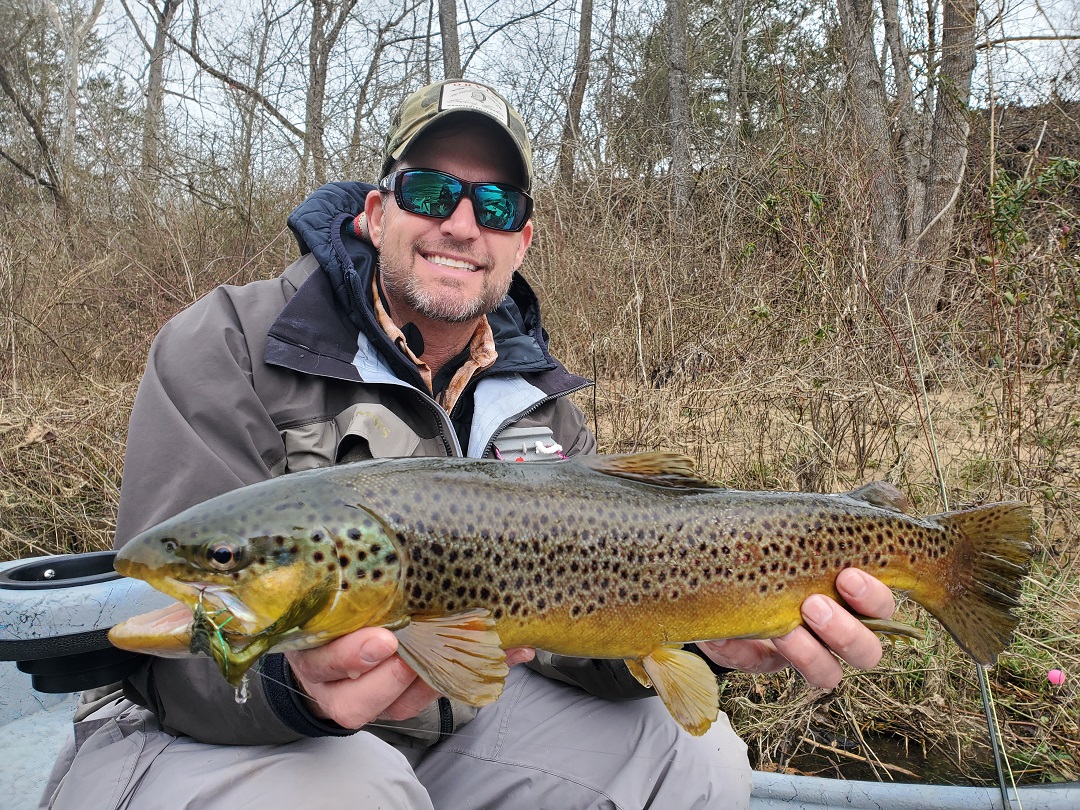 Follows came on the Swimming Jimmy and yellow Sex Dungeon, but no takes so I put Julian on a white peanut envy to get down and we were in hooked up!

In the end we got some browns on the streamer and the indicator rig, brought a triple to the boat…..which was just crazy on Saturday, and even got a boat White River grand slam!