Streamers on the White River. Now vs. Then

I had a trip with Andrew who is from New Hampshire the other day. His goal like most is to catch a big brown while fishing on the legendary White River. We have certainly put this river on the map these days, with so many anglers coming from around the world to experience the streamer bite and this is exactly what Andrew had in mind.  Faced with what many would consider ideal weather conditions; coupled with the correct water, we were certainly in for an memorable day.

Everyday is different when fishing this particular bite and some are better than others. This was something Andrew really doesn’t do on his home water so he was eager for the challenge. The morning started off rocky with bating five for five (sorry Andrew), but because the bite was on fire right of the gate he had plenty of chances to get this hook thing figured out.

The strategy for the day, which is something I would remember if you don’t understand how this whole generation thing works. We had two choices, one was to fish streamers in the morning until the water drops out or two, stay in the high water and follow it all the way downstream. So after fishing that morning, I asked him what he wanted to do. I told him we could put the drift boat in and fish low water or stay in the high water and throw streamers and option two soon became the winner.  Take notes if you are new to the rivers or don’t know how to figure out generation. Having a game plan is crucial on these river systems. 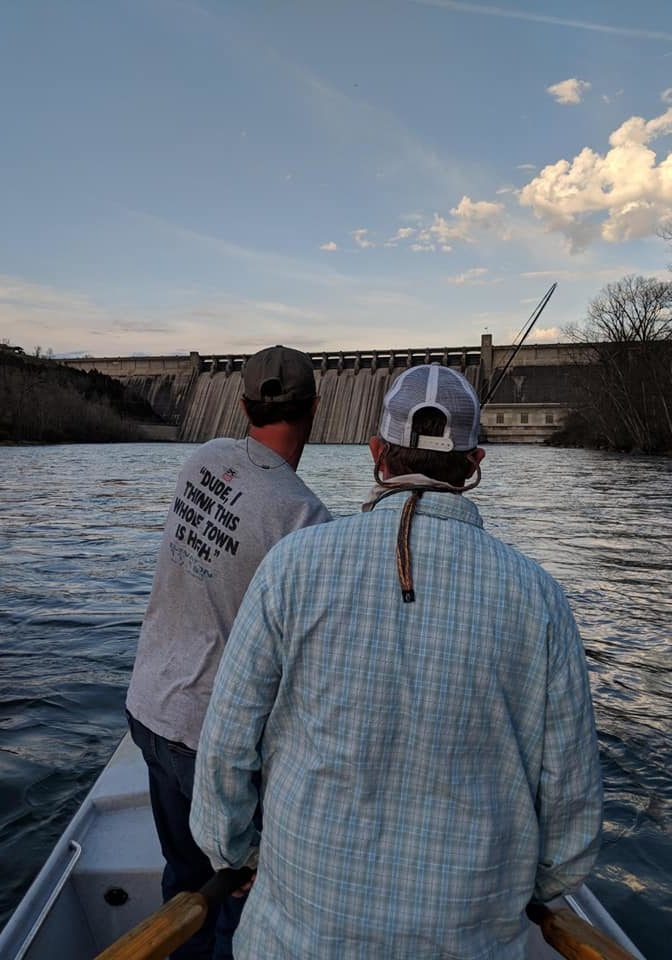 The White River is very long and has great trout water for forty miles so it’s easy to stay in high water all day. I put in at Gaston’s ramp around 7:30am. I motored up to Cane Island and fished both banks then went down fish to White Hole. By this time it was 10:30ish and I could see the water dropping along the bank. We took out and drove to Rim Shoals and motored up to Wildcat Shoals.

I wanted to go up further, but I knew the water was dropping and I started seeing just a little bit along the banks at Wildcat. Here we go, ran the bank and buckled five in a row within five hundred yards. The bank was hot and he batted five for five hooking up on all five. He was a happy man. Every time I would see the drop I would drive down and hit the holes that I was confident in and all of them produced brown’s this day. We had cloud cover this day and the sun was peaking out from time to time, but all in all it was cloudy which helped the bite for sure.

With timing the drop I continued to work my way down all the way passed Shoestring Shoals and motored back to Rim Shoals around 3:30pm. You would think the trip was done, but it wasn’t. Andrew told me when he came by to meet and greet that he wanted to fish all day. It was funny, when I was telling him the game plan about how we were going to fish that day, I said, we could start early and end about 3pm. Andrew’s full day meant twelve hours and we were excited to finish out fourth quarter with dusk approaching. Who doesn’t get excited about that time of the day, right?

When we pulled out of Rim, we drove back up to Bull Shoals to fish the rise at 4pm. It worked out perfect, we got there around 4:30 and had it all to ourselves for a few hours. We switched over to bobber rigs and fished white. We got two nice bows and three browns to finish out the day. All in all we had brown’s throughout the day fishing articulated streamers and the evening bite was good too! We couldn’t go into Cane and fish streamers because the water would’ve been to dirty, anytime there is a significant rise all at once it often takes a while to clean up.

This is a great way to stay with the high water and never settle for getting stuck in low water, especially if you are in a motor boat with a prop, lol. I’m in my drift boat about 80 percent of the time, but in situations like this it’s important to have jon boat. I hope this gives you some insight on how to approach different water scenarios.

Right Place at the Right Time

I also wanted to touch on what I meant in the title. Is streamer fishing better now than it was during the month of February. It’s really hard to say if traffic had anything to do with it, but I have never seen the amount of boat traffic like I did this year. I saw everyone’s pictures that day we fished and it looks like everybody had a epic day fishing for brown’s whether it was on low generation or high, bobbers or streamers. One thing I know is right now in this high water, the fishing has been great. You would think for a Thursday going into the weekend it would have been busier, but we only saw two boats as we motored up to Wildcat from Rim which is along way to not see any other boats. I wonder, just wonder, did pressure have anything to do with it or is timing, just being at the right place at the right time. 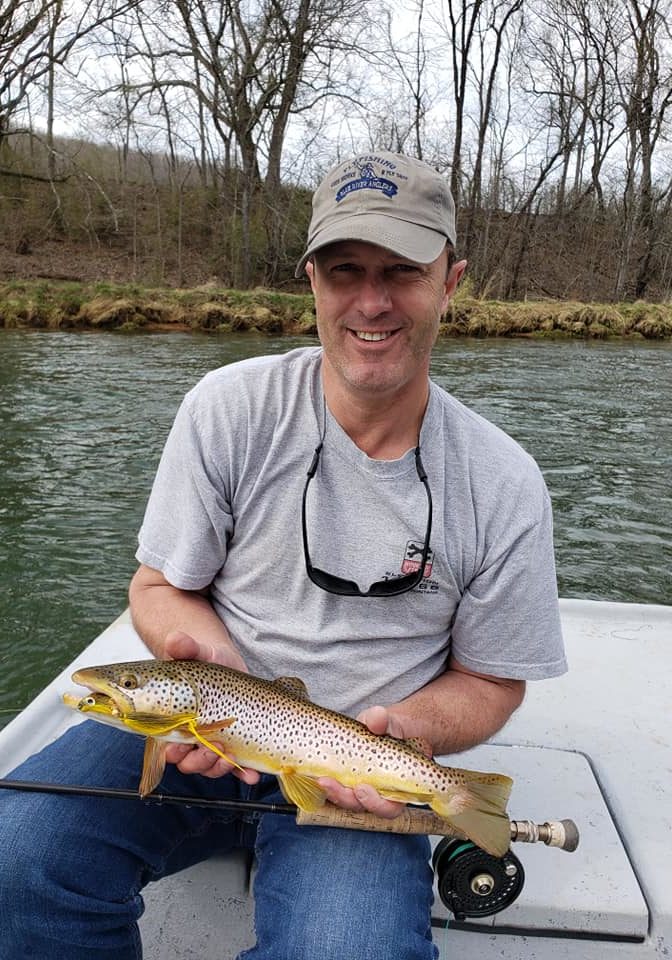 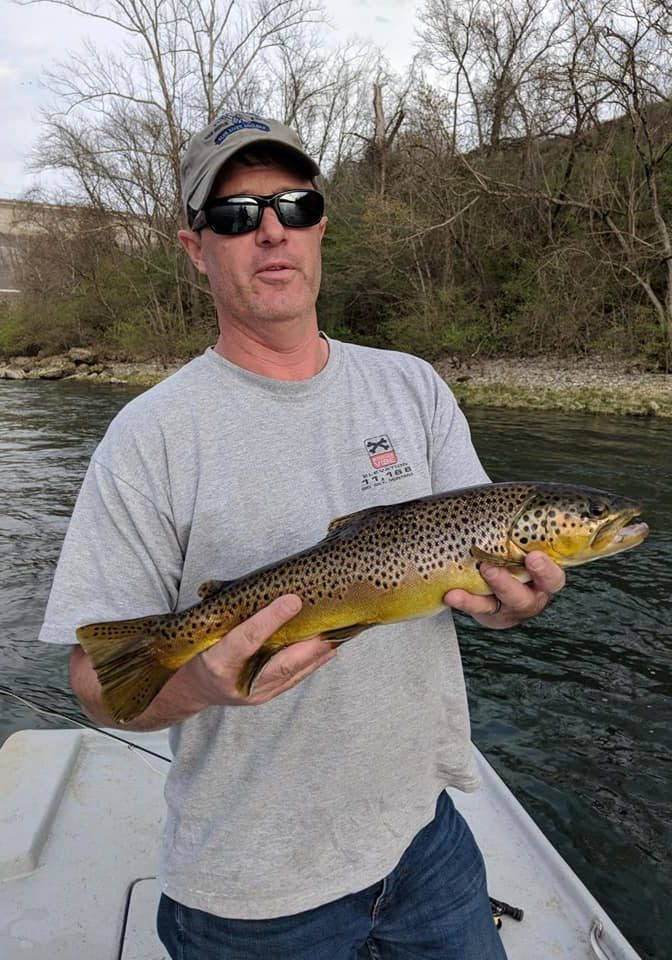 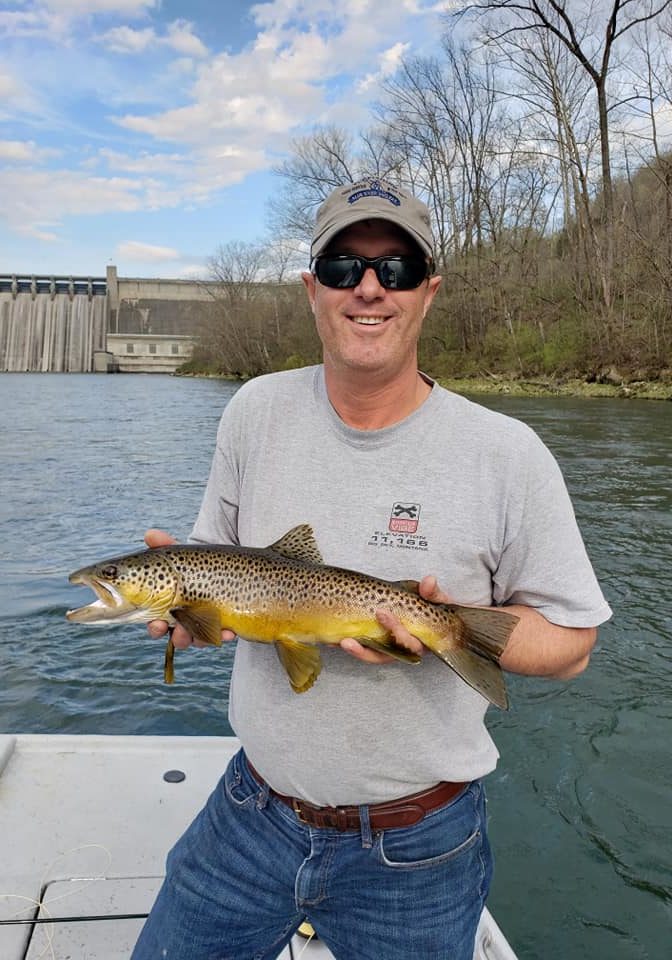 Taking the show on the road

Fly’s and Guides hit the road for the 22nd annual sow bug roundup in late March. Lisa was able to work the three day event and Jeremy was able to make to the booth Friday and Saturday. We were able to show some of the newer patterns we have on sale along with many of the Ozarks staples along with several starter tying kits.

The event included fly-tying, fly-casting, seminars on how and where to fish around the Mountain Home area. The North Arkansas Fly Fishers hosted the three day event which included over 100 tiers from around the United States allowed the public to sit down with tiers and watch while they designed works of art on a hook. The venue provided space for vendors which included artwork from local artists, several area fly shops in the area, fly fishing guides and outfitters, along with several specialty styles of fly-fishing equipment for sale.

We had another fun filled time at the show and meeting old and new friends to the sport. Don’t forget to mark you calendars for next year March thru the as this is a show that continues to grow and is appealing to fly fishers of every experience level.