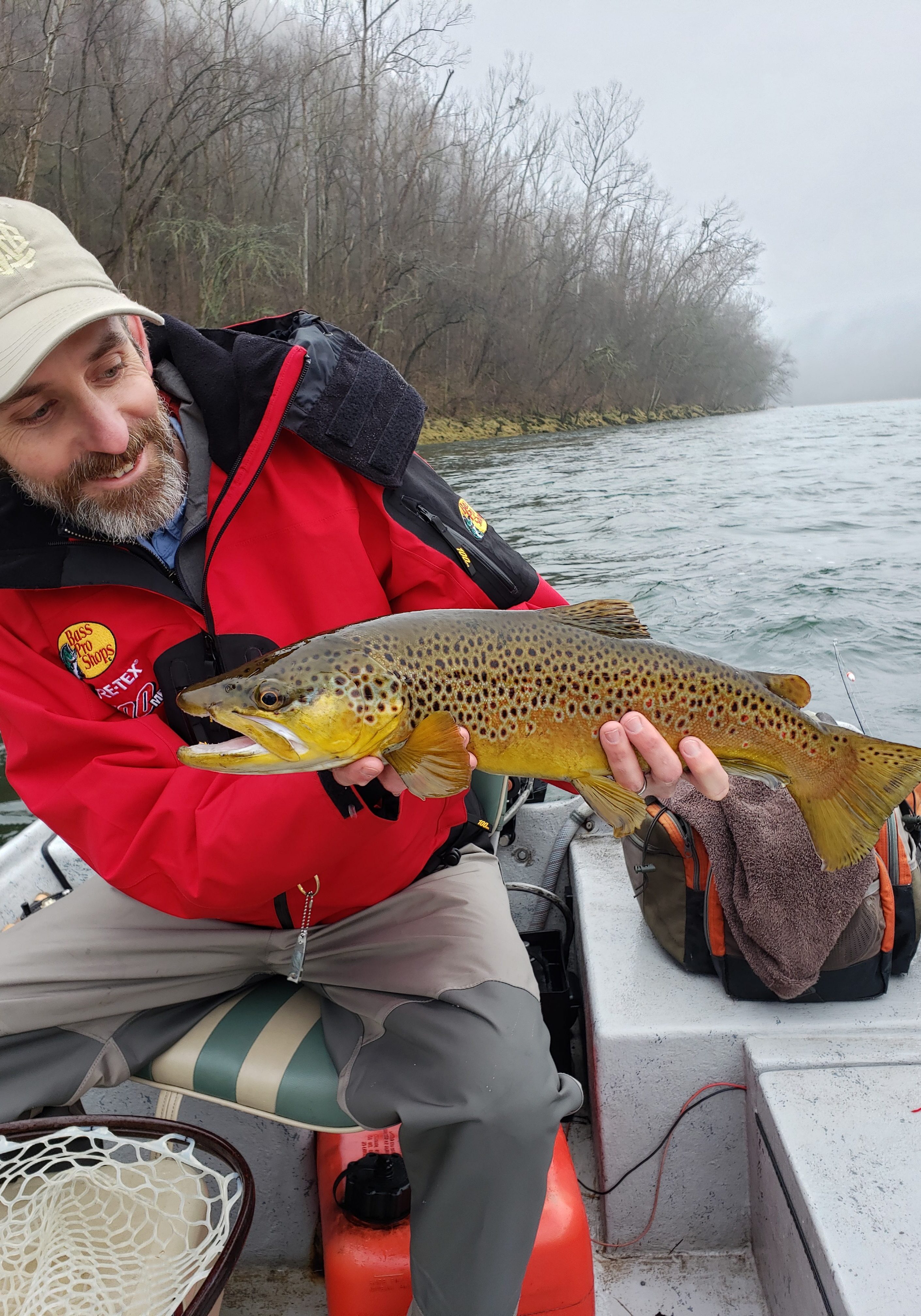 Water…lots and lots of water… up to 12,000 cfs of water! Steady generation has been going on around the clock on Lake Taneycomo. Shad have been coming thru the turbines from time to time giving anglers with boat access non-stop enjoyment. Wade fisherman and slower water drifting anglers had to patiently wait for several weeks. Taney shut down for a few hours for one day in mid-February for a few hours giving the few lucky anglers that happened to be at the right place at the right time the opportunity to haul line and not get caught in the trees, but other than that the water has been moving out there.

Streamers that have been productive are olive and white maraceivers, Conrad Sculpins in olive and black, and olive peanut envies and circus peanuts

The last few days of February have brought us some slower generation that has given up a more consistent bite. Trips that have been ran on Taney have been few and far between but when we have been out productive flies that have been working have been the highwater San Juan worms in red and cerise, Miracle flies in Apricot Supreme and Pinky Lady, and in the slower slack water all colors of the mega worm, larger scuds, and zebra midges are attracting fish.

The steady flows near 20,000 cfs the month of January came to an end mid-February for all the streamer junkies out there. As a result, came a slower bite and more casts before those successful hook ups could happen. Making the right cast and reading water became more critical in picking up fish on larger streamer patterns. February water releases brought various surges of water in the early morning and then drops to 35 to 65 megawatts of power. The month of February also brought in the boat traffic, more and more boats are on the White river and will continue to increase as this streamer craze continues to grow. Finding undisturbed water is becoming far less easy to find as in years past. Smaller streamer patterns such as the peanut envies and circus peanuts are producing large quantities of trout; however, if big browns are what you are searching for tying on large bucktail double deceivers, large drunk and disorderly’s, and various diving bucktail patterns are getting the job done. Colors that are working well are, olive, yellow, and white and combinations of any of the three have proven effective on most days. The positive of the lower flows have brought us more ideal night fishing water and those who are willing to brave the cold are boating browns in the 20-inch range with good results. 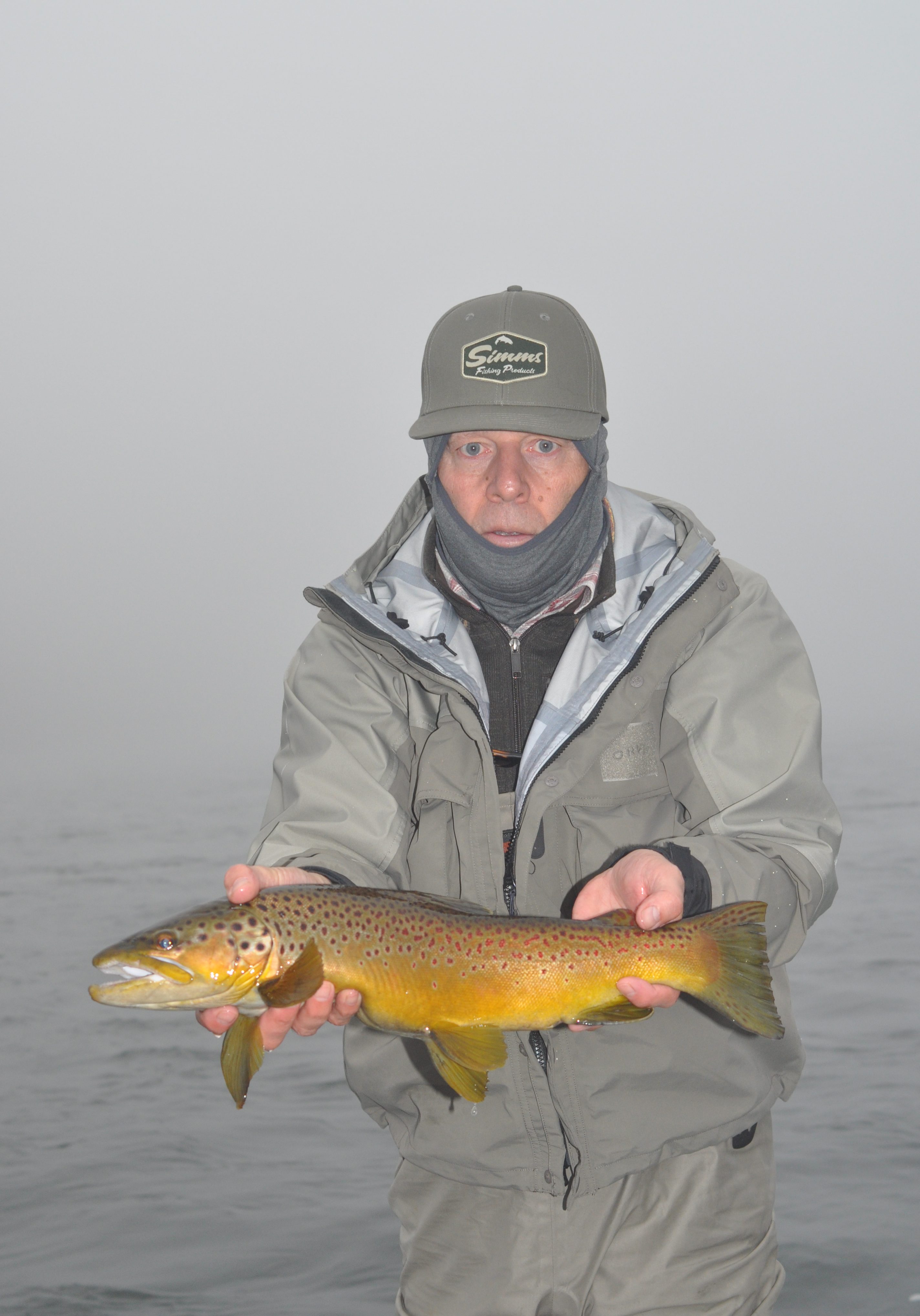 Surface patterns both articulated and single hook patterns such as the white bellied mouse, master splinter, and moreish mouse patterns are working well. A wide array of colors all working. We have been faced with a few windy nights and had to resort to sub-surface patterns that are staying high in the water column like fat heads and smaller drunk and disorderly’s to keep the trips successful.

Nymph fishing the white has great at certain times of the day. The ruby and other zebra midges have been producing well along with megaworms and egg patterns are grabbing the attention of a few browns. 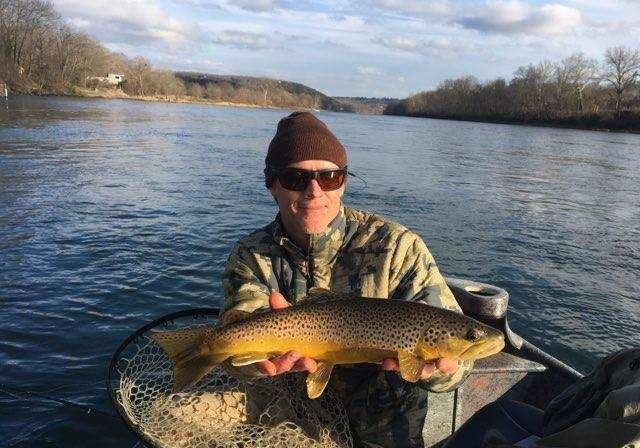 So far in 2019 high water has been the only thing going on at the Fork until mid-February when we got to see windows of low water in the afternoons. When those opportunities opened up the mouths of the trout opened up; as well, nymph fishing has been on fire!

The root beer midge still remains the midge of choice for trout on the Norfork Tailwater. The Miracle Fly in golden nugget and Oregon cheese are pulling in fish as is the megaworms in white, chartreuse, peach, and red.