The good, the bad and the ugly

Imagine having a wonderful vegetable garden that is the envy of all the other gardeners in the country. For several years, produce flourishes as the garden grows very quickly under optimal conditions. After the word gets out about this garden, people get greedy and pick everything before it has the chance to grow. Although this situation may sound absurd, this is exactly what has been going on with respect to White River Trout Conservation.The early years of each White River Basin tailwater were characterized by experimental stockings and light angler pressure. These rivers did not get much national recognition until the 1960’s and 1970’s, and even after all the early exposure; crowds did not become a real issue until the 1990’s. Seemingly overnight, the rivers were choked with all types of anglers, and existing regulations were not adequate in terms of conservation. The trout fisheries below all five White River Basin dams are mere shells of what they used to be, and this is a real shame considering that it does not have to be this way at all.

You would think that poaching would go out of style at some point, but there is still a faction of society that thinks it is good fun to pillage resources and steal from the public stakeholders. It is hard to determine whether or not there are more poachers on the water than is past eras, but there is no doubt that the techniques of a poacher are far more deadly and refined today. The damage done by poachers is most significant in catch and release and special management areas because big trout in these sections are easy targets.

Until the Arkansas Game and Fish Commission gets a grasp on just how much poaching hurts our rivers, it is likely that the actions of a few will continue to diminish resources meant to be enjoyed by all. Poachers do not always fit a stereotype – many guides will break the rules, and even a few weekend anglers will take an extra limit or two on every visit. Rule-breakers come in all shapes and sizes.

Another major white river trout conservation issue confronting Ozark trout rivers is over-liberal harvest and method-of-take rules. The use of natural baits can be extremely damaging to the health of a fishery because a large percentage of trout will die after ingesting the entire hook into their stomach. Flies and lures typically hook trout somewhere around their mouth, so the hooks can be very easy to remove and most fish survive after being released.

Because almost all areas of the White River, Lake Taneycomo and Norfork allow bait and the harvest of five rainbow trout per day, it is easy to see why an increase in numbers of fishermen has made such an impact on these fisheries. The conservation agencies that manage Ozark coldwater resources have been slow to adapt to changes in pressure and the trout will be the ones who suffer the most.

It would be shortsighted to talk about conservation issues without mentioning environmental concerns. Drastically fluctuating flows and oversized boats damage the banks, river habitat and spawning grounds, and polluted runoff is becoming a real issue with so much new development adjacent to the water.

Without constant monitoring and watchdog type efforts, a declining environment may prove to be the ultimate cause of the demise of the top Ozark tailwaters.

In a perfect world, the regional conservation agencies would fully recognize the value of the Ozark trout fisheries, as these rivers exhibit a habitat like no other in the world. Fish grow quickly due to year-round coldwater flows and abundant food sources. With all of the research available on the subject, coupled with overwhelming public support, it would make sense for the Arkansas Game and Fish Commission to contemplate sweeping protective regulations that encourage ethical angling and catch and release. Most White River Basin anglers want to catch bigger fish, and everyone recognizes the decline of these rivers. Regulation changes provide immediate results, and such measures would help both the fishing and the entire regional tourism economy.Politics has reared its ugly head when efforts are made to offer up solutions that will provide an expedient and significant fix. Proper management is a major component when it comes to enhancing the Ozark fishing experience. Unfortunately, there is a shrinking but powerful contingency of commercial entities that will fight dirty when it comes to protecting harvest, chumming and bait fishing. Just recently, illegal meetings were held that quashed a popular regulation change on the Norfork, and unless the entire trout culture accepts operating within mandated parameters, our cherished rivers will pay the ultimate price.

The trout fisheries located below the dams in the Ozarks are unique in the fact that there is so much good habitat per mile. This means that every little bit of protected water is capable of providing quality angling to many people. The Missouri Department of Conservation is far more progressive than the Arkansas Game and Fish Commission with respect to trout management. This is reflective in the hugely successful trophy slot-limit implemented on the upper three miles of Lake Taneycomo in 1997.

Arkansas, unlike Missouri, has yet to see the real value in trophy regulations. There are only 3.5 token miles of catch and release water on over 50 miles of quality trout habitat. Slot limits work, and only a slightly larger percentage of water would need to be protected for everyone to experience the best of both worlds.

The entire Norfork should be protected, and ten strategically placed miles of slot-limit water on the White would go a long way in attracting trophy fishermen back to the region. Of course, for trophy regulations to work, bait must be eliminated in those sections. It is strange how a few people are so committed to a method of fishing that is detrimental to the fisheries that they work and play on.

The picture for Ozark trout fisheries is not entirely bleak. At the beginning of 2009, a smart regulation was passed that limits brown trout harvest on all Arkansas trout rivers. This is a good start. Also in the favor of conservationists is the fact that so much dirty practices and dealings came to light with respect to last year’s Norfork catch and release area extension regulation.

Those concerned about the future of Ozark trout fishing must keep the pressure on and let the powers that be know that misinformed and scared business owners will not be allowed to make resource management decisions – the fact that it has been so blatantly tolerated in this case sets a dangerous precedence, and do not be surprised to see a play made to reduce the size and number of catch and release zones.

The White River Basin trout fisheries are now in good shape, but this will all change after a few weeks of low water. The only way to end the up and down cycle of fishing is to effectively manage these resources in a way that takes poaching, increased pressure and the public’s thirst for trophy sport fisheries into consideration. Please let me know if you are interested in learning how you can help this very important cause. 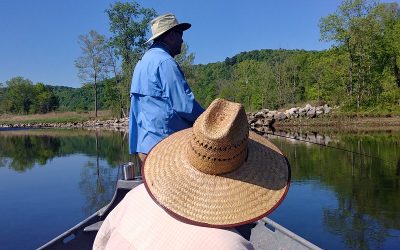 Planning A Trip Planning the Perfect White River Fly Fishing Trip Unfortunately, the unpredictable nature of the White River Basin trout fisheries makes it difficult when planning a trip for a vacation far in advance. There is no way to know exactly what will happen...

New Presentation The Extended Drift Presentation: A new twist on an old technique This new presentation will change the way that you think about how you drift a fly. For some of you, this will sound strange, but techniques evolve as new generations of anglers move...

Mending My thoughts on Proper Mending Techniques From observing a lot of different fly fishers while I am out on the water fishing myself, one thing I’ve noticed is how most fly anglers really don’t understand what it means to mend their line. I know that everybody is...