This Lake Taneycomo Fly Fishing Report was a long time in coming. The generation flows at the Table Rock Dam have been up and down for the last three weeks making it difficult to predict good wade fishing water. I like to call it yo-yo-ing! With two units or less, you can still wade just below the dam with great success. Table Rock Lake is currently one foot below power pool at 914 feet. The Corp of Engineers has raised the power pool to 917 feet. Normal pool last year was 915 feet. The lake level has been steadily going down due to small amounts of rainfall and the generators running constantly. Planning a wade trip can be difficult with the changing generations. They generate when they want, after all, the dams were built for flood control and electric power generation, not for fly fishermen! 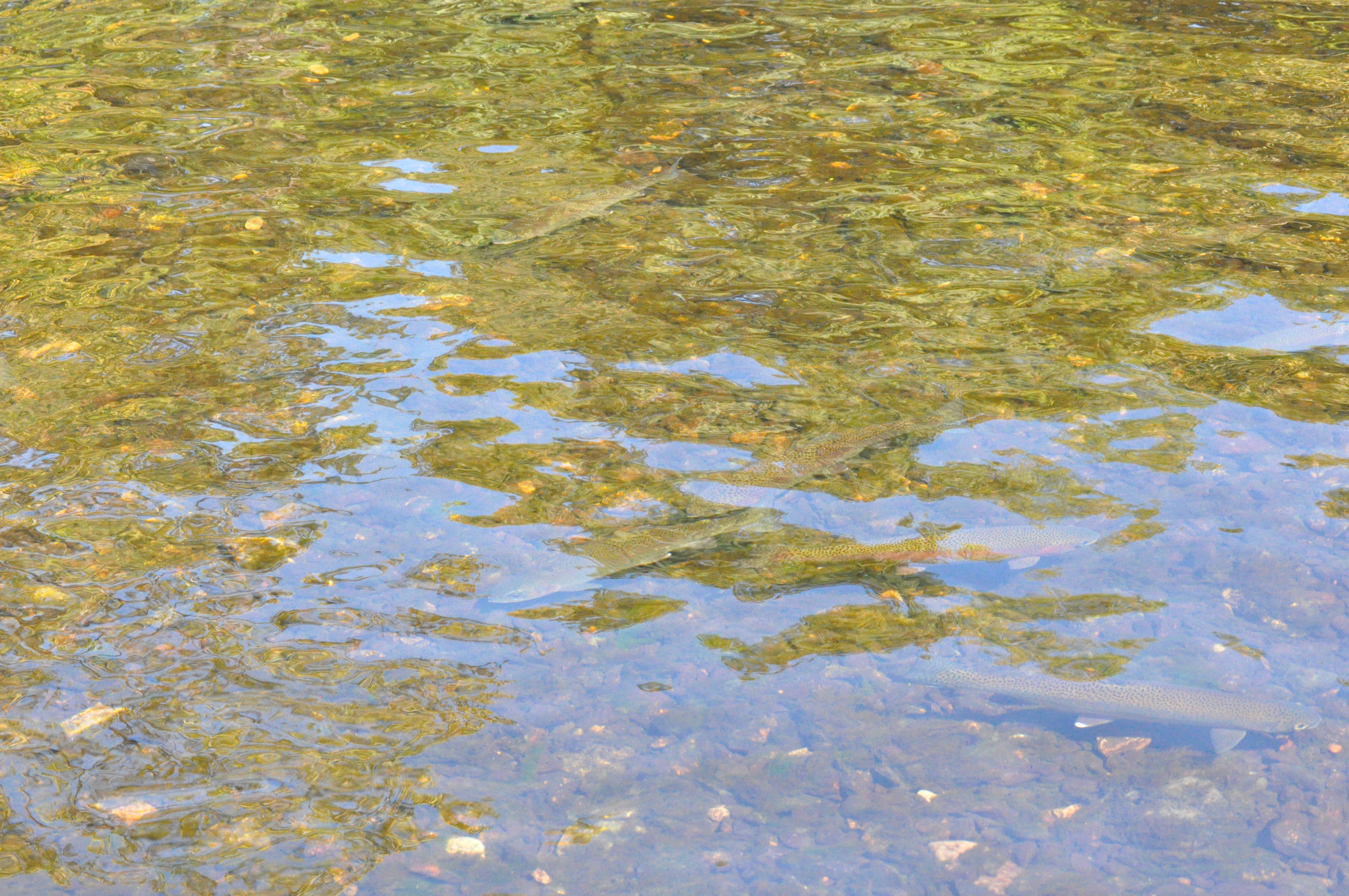 The options now are to fish from a boat or from one of the outlets. My friend, Brad Hoffman has been throwing ants in high water along the banks or in soft eddies with good success. In high water, go bigger. Fishing large streamers is a great tactic when it is cold and gloomy. The trout love white. White works on big streamers as well as to small wooly buggers.

There are those who say we will have a shad kill starting any day now. From my experience, we will not have a predictable kill until the lake turns over. Shad kills usually occur in March to late April. It’s more likely there will be a shad kill on the White River. Whether there is a shad kill or not, trout still like white through the winter months into April. 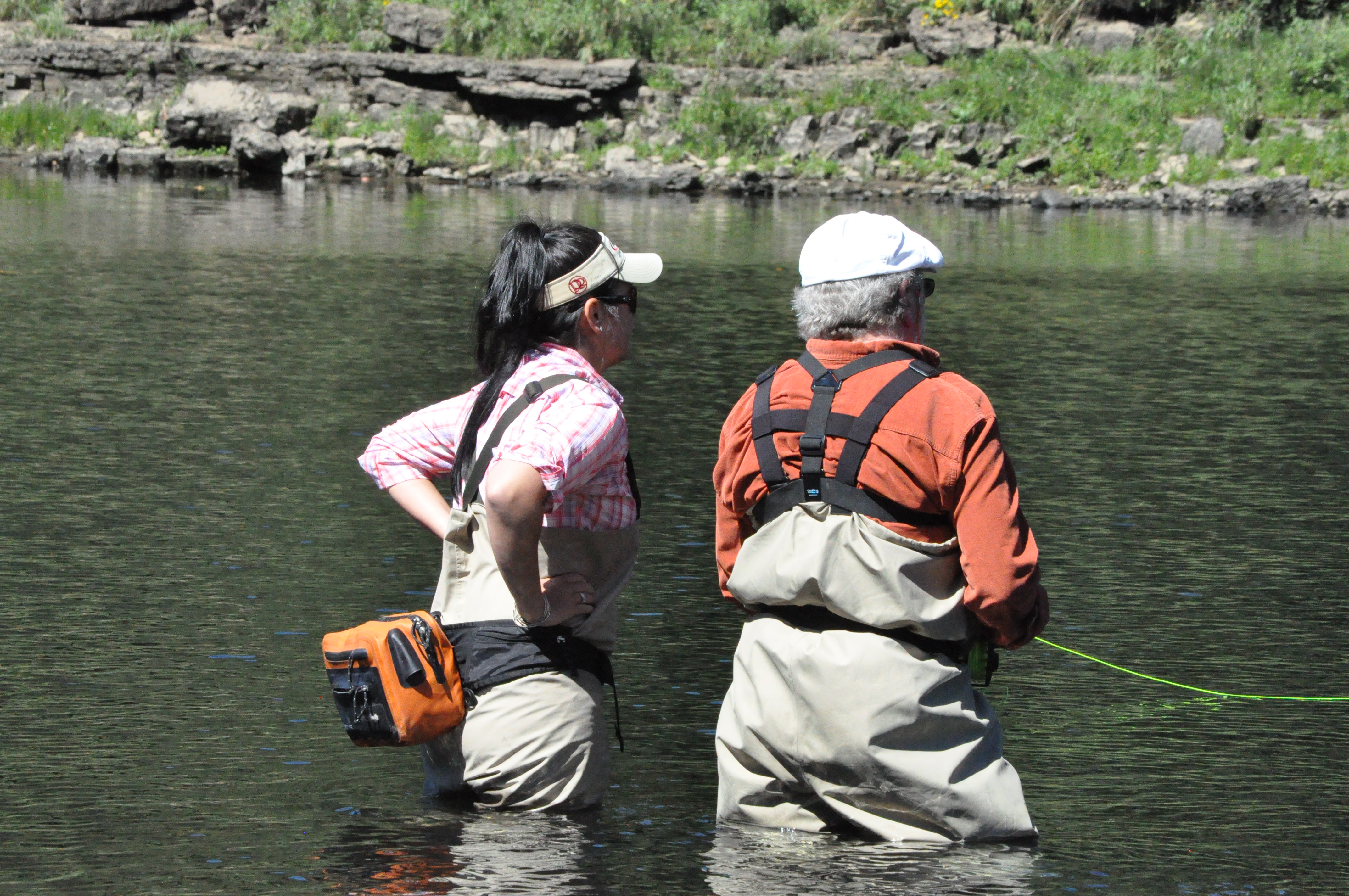 I wish my Lake Taneycomo fly fishing report is not as extensive as I would like, as I have been spending most of my time fishing the Norfork tailwaters. Norfork has been the “hotspot” lately.

The river has some big browns cruising up near the dam. Their spawn appears to coincide with that of the White River.
Lisa and I fished there last week with great results! We landed a 22 inch brown and hooked one in the 24-25 inch range that didn’t quiet make it to the boat. That was the biggest brown Lisa has caught in a long time. It was one of my best trips there. I believe timing was the key to finding the fish. 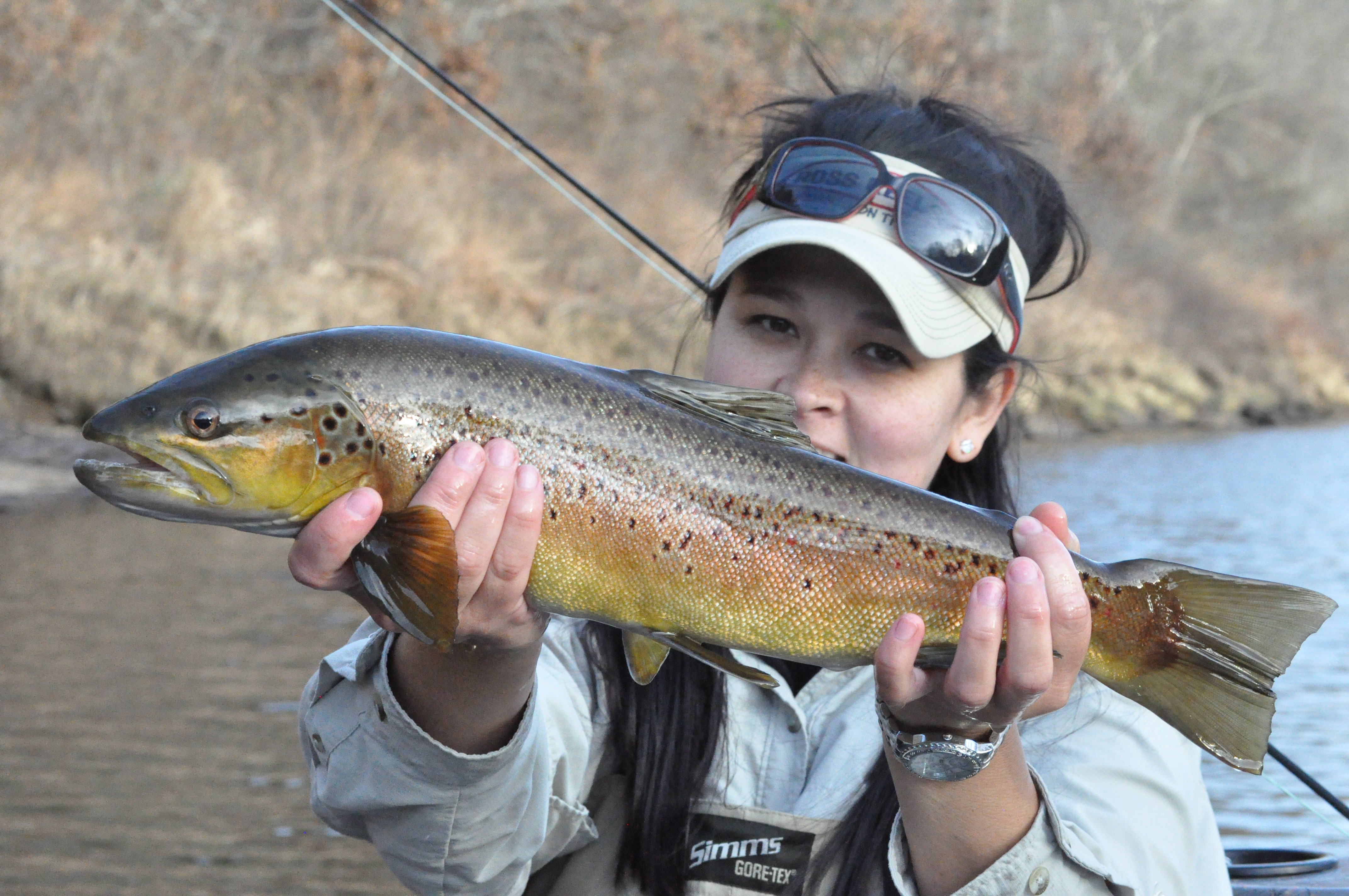 I didn’t see any redds, so I’m wondering if the spawn is just starting. We haven’t spent enough time on Beaver to know for sure. We do plan on fishing more there in 2014. It gets very little pressure except in the public access areas. Beaver is a great backup to fish if Taney is generating a lot of water. Being the first dam in the White River Basin, it doesn’t have the generation like the other dams unless there are big spring rains.

Beaver is the first lake to drain in the system. After draining, it has very little generation. Only an hour from Branson, it’s a close diversion to Taney high water. Certainly beats sitting in a hotel room “wishing you were fishing.” Roaring River State Park is close enough to Beaver to allow fishing both rivers in a single day. 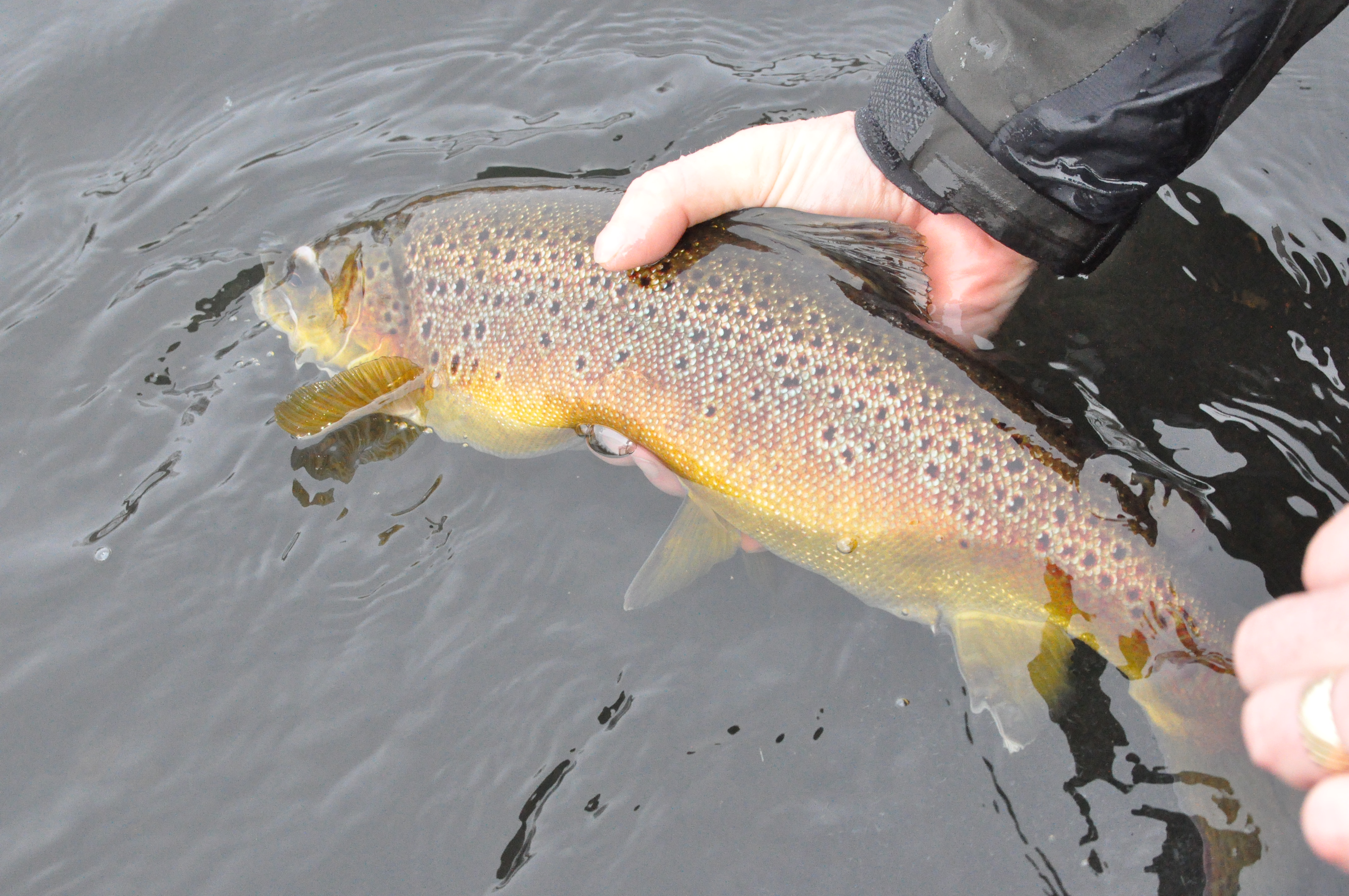 As with the Taneycomo Report, I wish I could give a more detailed report. We have not spent much time there during the spawn. During the spawn, the big browns are slower to bite. You can still catch them, yes but, as soon as the spawn is over………the monster browns are hungry and ready to indulge themselves on the big streamer patterns. Mid January to the end of February is fantastic! Serious action can be had during this period of time. If you haven’t fished it, you are missing out!

This area certainly has room to recover. Even though they stock browns here, there is a decrease in quality. We fished this area three times this year without hooking any big fish. We hooked several small browns under 17 inches with a small mix of rainbows. Apparently last years flood moved them around. Certainly the fish can survive a flood, but there has been a noticeable negative impact. Never do we go there with the intent of hooking large numbers of rainbows. Rainbows have not been stocked there since the 70’s. The goal for me has been to have it as a back up plan for streamer fishing for big browns when the White and Norfork aren’t fishing well. It’s only an hour from Mountain Home and is a beautiful streach of water. However, without improvement, we won’t spend as much time there this year. 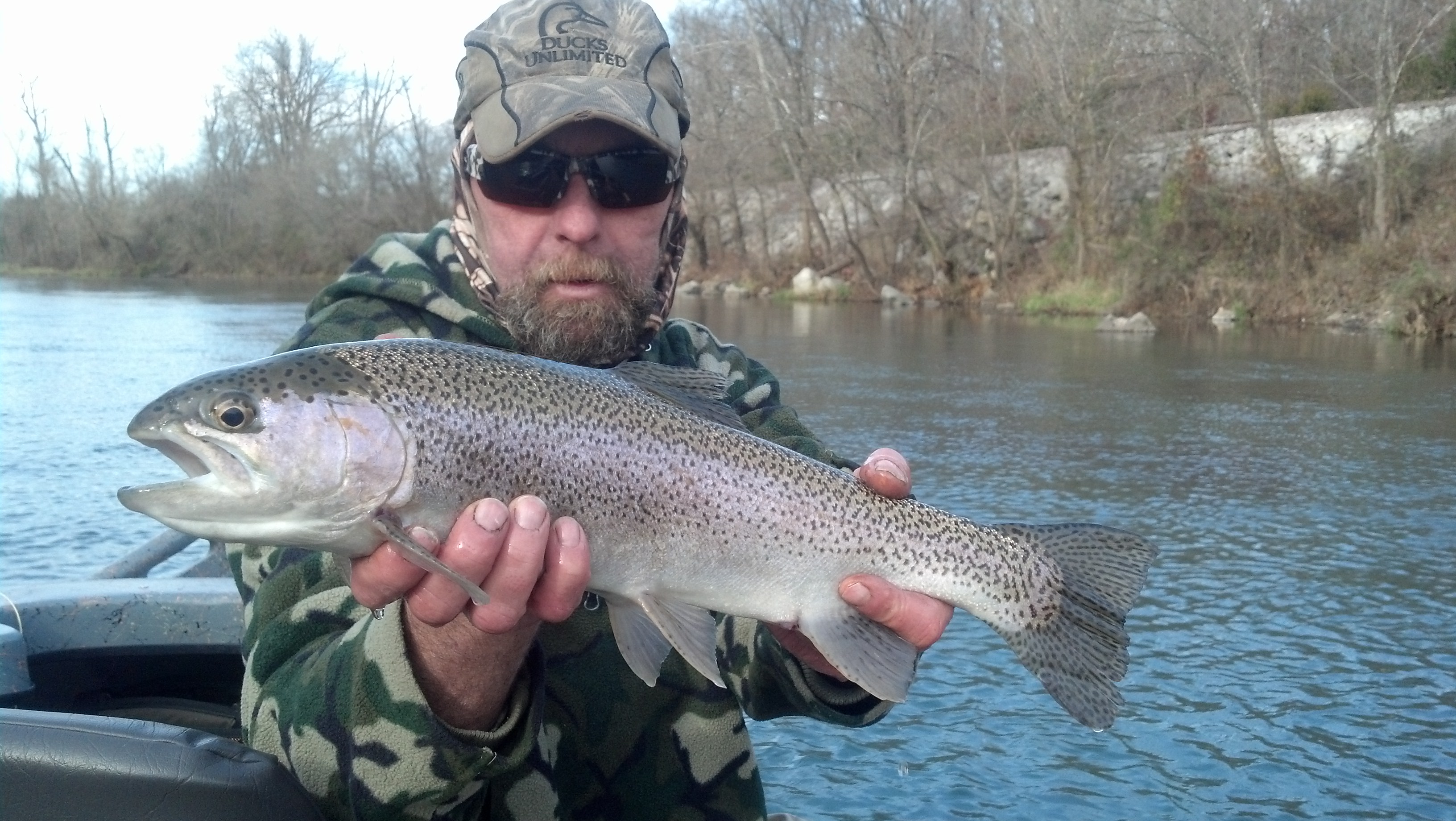 The Spring River is new to me. Having fished it recently, we wish it was a lot closer! It’s about three and a half hours from Branson and one hour east of Mountain Home. The Spring River spawn appears to occur about the same time as the White and Beaver.

We went on a marathon fishing trip about a week ago and ended up on the Spring. Between guide trips, I took a friend who knows how to row a drift boat and we floated and fished from Dam#3 to the first take out. Immediately after launching the boat, we could tell this river was holding some really big rainbows. We saw a lady land a 24 inch rainbow at one of the chutes that dumps out from the hatchery. That happened before we started fishing. Once on our way, we saw several big bows on redds. We didn’t want to bother them so we moved on while fishing with big streamers for browns. We tried large articulated streamers at first with no success. We switched to nymphs and began catching fish after fish, but now browns.
We met a guide along the way named Mark. He is the only local guide on the Spring River. (www.springriverfliesandguides.com). According to Mark, the browns are stocked only twice a year and are not nearly as plentiful as the rainbows. I believe there are some big browns there to be had on large streamers. Time will tell!!!!
We are looking forward to a return trip there. 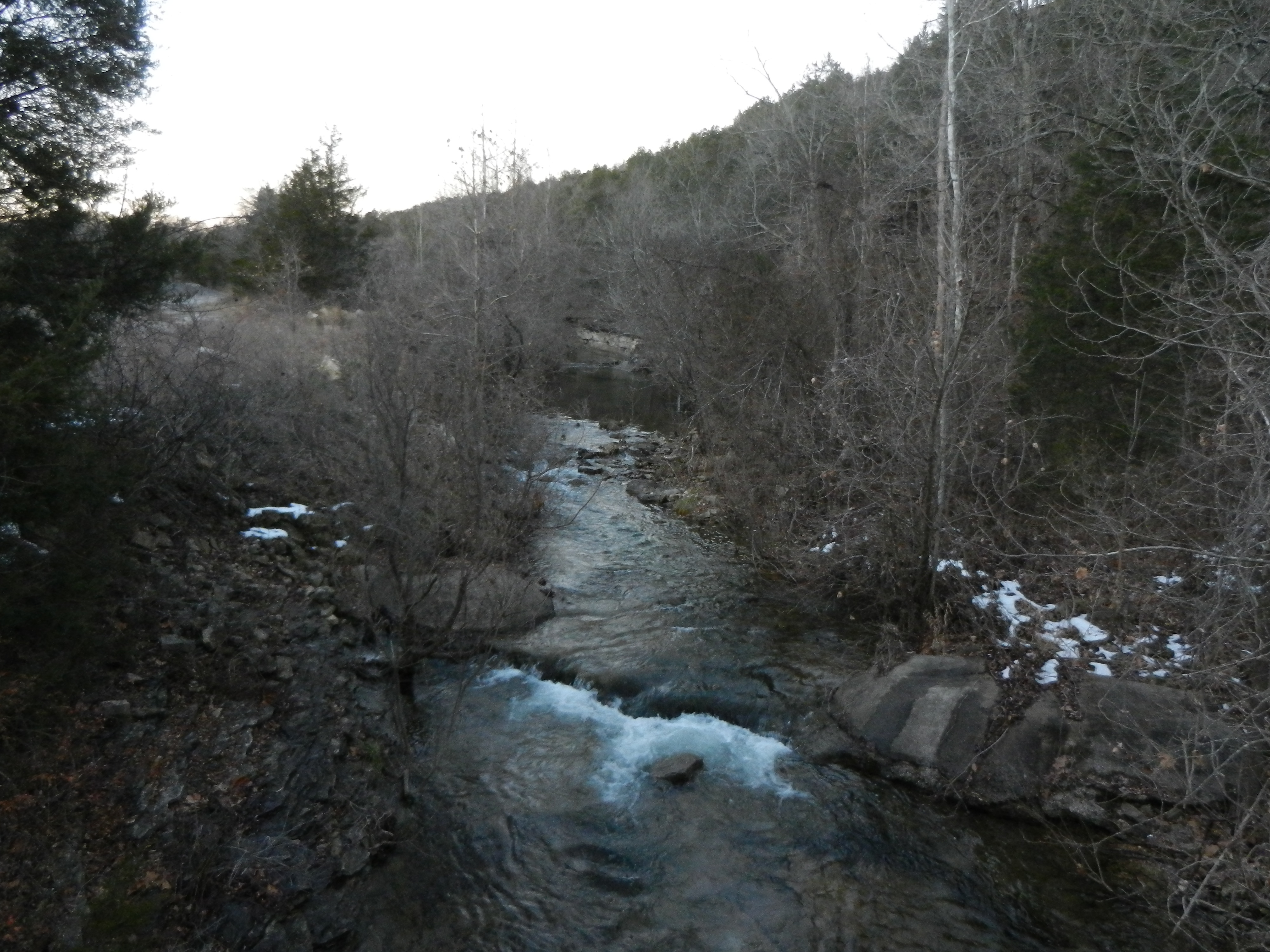 Good News!! Our creeks should be in great shape when the snow melts. With Taneycomo running lots of water, the creeks should have plenty of water in them allowing trout to migrate into them. This is probably my favorite time of year. One can feel like you are fishing for wild trout! The conditions and nature of the trout calls for your skill levels to be up to par. They are a bit more spooky. Once in a while, you will find a hog in there. Well….not really a hog….but a big ole trout. One you will want to spend all day trying to hook! We plan on checking some of the creeks out next week.

If you have signed up for the newsletter and haven’t received your free fly, don’t worry, it’s coming soon! I hope everyone likes the new website. It continues to be a work in progress. Check the website often and look for changes on the home page. If you see something different, the site has been updated with new content. We have spent many many hours building a resource to serve as a guide and learning tool to help beginning and experienced fly fishers alike and have a place to go to learn more about our great sport. We feel this time has been well spent. The fly fishing reports were secondary to the building of this resource as we feel the information in the website will be helpful no matter what the current conditions are. The great thing about fly fishing is we are always learning something new. We will continue to share our knowledge and the new things we learn.

A special thank you to all those who chose Fly’s and Guide’s to be your guide! Also, thank you for your fly orders! It keeps me doing what I love to do.

The Lake Taneycomo Fly Fishing Report is full of information you can use the next time you decide to go fly fishing on the Taneycomo. You can send me a email directly to flytiehunt@hotmail.com if you are interested in booking a guide trip. Feel free to visit us on Facebook, If you really liked this article, +1 above – check us out at +flysandguides (Google+) or send us a tweet with a question or just to say hi. Check out the Fly of the Month!