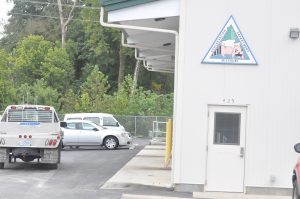 Some of my clients have wondered how this year’s browns have fared, especially after our 2008 and 2011 floods.  They are also concerned with the hatchery populations.

In this issue of the Lake Taneycomo fly fishing report I wanted to tell you about my visit to our new hatchery facility. I met with Clint, who  manages the trout in the Shepherd of the Hills Fish Hatchery below Table Rock Lake, and asked him some questions. There is good news about the rebounding brown trout population on Taneycomo since the flood in 2008 and 2011. 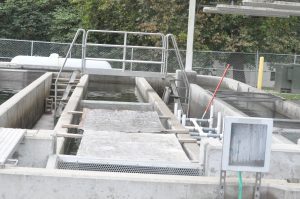 These browns are very healthy and are weighing in between 2 -4 pounds.

200 browns have gone up the ladder in the last three weeks and most are averaging two to four pounds. Clint also said that these are some of the nicest browns he has seen in a long time. They have great color and are very healthy.  This bodes well for the future of our browns.  These trout are from the 2009 stocking on average and with a extra 5,000 browns being stocked every year, we are seeing  encouraging results.

I caught browns throughout the year and this is something I have not done in a while. I’m sure it is from the extra trout they stocked in the previous years. They still plan on stocking 5,000 more this next year. This would make thee total yearly release 15,000. I also discovered that the hatchery folks conducted studies to see how long it would take browns released in the Rockaway Beach area, which is roughly twelve miles down river, to get up to the dam. Answer:  three days. 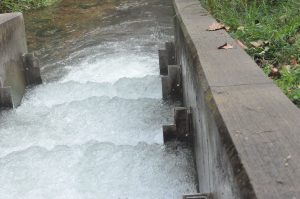 Here’s a shot of the main ladder entering Lake Taneycomo

The hatchery is also planning to use a new anesthetic on the trout. This anesthetic will only last two days instead of  21 days. This means trout can be released into the wild a lot sooner and hatchery personnel will not lose as many fish from holding them so long in the raceways.

The Lake Taneycomo fly fishing report will set the record straight. Many of us incorrectly believed the new hatchery built not long ago was designed to raise browns only;  in fact, no browns will be found in the raceways.  They are only to be found in the ladder connected to the raceways next to the new building. They like the browns to hold up top in the old hatchery because the water quality is better. The three drum filters recently installed will now make the water quality better for the lower hatchery. I’m sure this will determine if they will eventually hold browns in the new facility. Only time will tell. We probably have three more weeks  before the run comes to a end. Good luck out there and safe fishing! 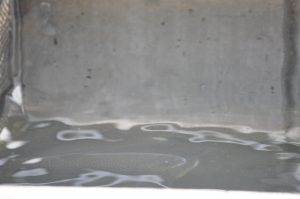 Brown trout in the raceway prior to being released into Lake Taneycomo.

The Lake Taneycomo Fly Fishing Report is full of information you can use the next time you decide to go fly fishing on the lake. You can send me a email directly to flytiehunt@hotmail.com if you are interested in booking a guide trip. Feel free to visit us on Facebook, If you really liked this article, +1 above – check us out at +flysandguides (Google+) or send us a tweet with a question or just to say hi. Check out the Fly of the Month!