Fishing is good, life is good, what more can you ask for…. 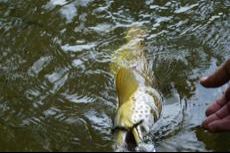 Long overdue fishing report, but it’s finally here. There are a few reasons for this. The first one is I’ve only had a few days off in the last thirty days and the other reason is I’m so busy with this new website that I’m building that time is very minimal. I just don’t want to back track and I’m over this site and in with the new. It still has a while, but the progress is coming along. Because I have to cut and past 380 pages of content from my old site to the new it’s got me a bit swamped, but anyways let’s get to the fishing report.

Taneycomo has been good to us this year and a lot of this has to do with little to no rain. Which we need, but us guides and resort owners are having a great year because of it. You can be guaranteed that if you come to fish Taneycomo you will more than likely have low water in the mornings. It’s been pretty consistent for the last month with maybe a few days of running water around the clock. Last week the Corp was not accurate with the generation schedule, but this week they have been on the money with when it’s scheduled to come on. That in return has made for some good fishing and it’s nothing to catch 30-40 fish in a half day(4 hours) of fishing, but if you’re a good caster probably more than that. 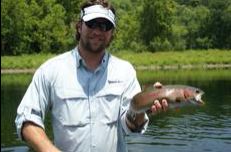 The trend for me and the way I map out the course in the morning really depends on wind (if you haven’t read my article on wind click here to read it, you’ll be glad you did) and when it starts in the morning. For the last month the wind has been here every day give or take a few days, but that has been key for how I fish Taneycomo in the morning. If the wind starts later in the day I move to deep water first thing in the morning. The biggest reason is because you get way more bites verses the shallow water. If the fog is thick the fish feed better deep (I have found that the bigger trout are feeding deep first thing in the morning). Once the fog lifts then the trout will get in the shallow water and start cruising around looking up. I haven’t fished up top that much, so everything I’m writing pertains to Rocking Chair Hole down to Lookout Hole. However I have fished the water between the two outlets having good results. I think this has some of the best current in this upper stretch that holds a lot of fish, and a lot of fish that are on the move because this is the main channel they go upstream in.

What’s been the “hot” fly for Taneycomo? 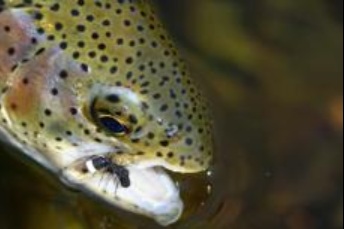 How about Ant patterns!! Tom Rogers, who has been a guide for over 25 years on the White River, is probably the best dry fly fisherman I have ever met. I’ve known him for 16 years and we have become real close over the last few years fishing a lot together. He has developed a serious ant pattern that is destroying these trout in the afternoon that I wanted to include in this fishing report. We are in the middle of writing an article about fishing ant patterns and should have it done in a few days. I really think this hasn’t been a real popular way to fish for trout at Taneycomo and Tom really deserves the credit to figuring out that these trout here at Taneycomo love this pattern and I wouldn’t be surprised if this becomes a staple pattern for Taneycomo, just like Brad Wright’s sculpin or various zebra midge patterns. We have been fishing this pattern for a long time, but kept it a hush- hush, but anymore the locals are starting to figure it out, so we figured we could get a article (the article will be called “bow’s on the flats) together by Tom Rogers and let him tell you all about it. Until then all I can say is you better have some ant patterns if you want a crazy dry fly bite. I know my clients are having a ball with this and if you want to just give us a call, either Tom or I will take you out. If you are heading this way and need some ant patterns and want us to tie you some just send us an email and we will get them in the mail to you. 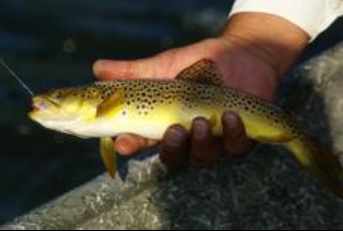 Taney trout are not that picky right now and most zebra midge patterns are working well along with various cracklebacks, sculpin patterns, scuds, Griffith’s knat, miracle fly, soft hackles, rs2 emergers, loop wing emergers, wd40’s and some articulated streamer patterns if we have the right water. 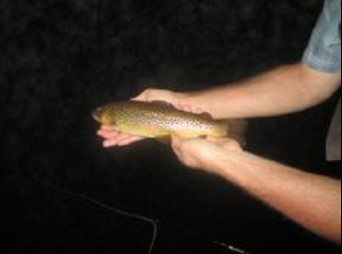 I’ve also had some night trips and fishing is good only if the water is shutting down earlier in the night ( let’s say around 9-10 and dropping out around 11 am) If water drops out sometime after 1am you can expect the bite to be slower that night. The fish are not picky with fly choice; just keep the profile in a size 6. I’m still researching on fishing high water at night in my drift boat, but still figuring out when these fish get on the banks to hit big streamers. I’ve had some results, but not like the White at Night.

What’s going on with the Hopper bite?

To be honest I haven’t fished there a lot because we have had lower water levels here at my home waters. I have been down there a few times in the last week to fish the hopper bite, but I’ll be real honest, it really depends on having the right water to allow these fish to be on a consistent routine on targeting hoppers only. I think the yo-yoing the water on the White has been the main reason why this bite hasn’t been stronger. That and I think August is the better month, but because we have had a drought and no rain I can tell this year it’s a little early and hoppers are out in the full swing!! If the generation stays more on a steady flow of water for a longer period of time I would bet this bite would pick up. The up and down affect with the generations is throwing the trout off a little bit which keeps you scratching your head and the same for the trout. It keeps them from really getting into a feeding routine. I’ll keep you posted when I think the bite is more solid and worth taking the jump for a serious hopper bite. You can still catch lots of fish on hoppers, but haven’t seen the results I’m used to seeing just yet. Hiring a guide will help you because they know how to stay ahead or behind the soupy water, which you don’t want to be caught in if you have a drift boat. Overall I would love to be on the White River more because you do catch bigger fish more often than you ever will at Taneycomo, but catching quality rainbows is still better right here on Taneycomo.

Feel free to visit us on Facebook, If you really liked this article, +1 above – check us out at +flysandguides (Google+) or send us a tweet with a question or just to say hi. Check out the Fly of the Month! You can also see the latest fishing report and other fly fishing tips by subscribing to our newsletter!