For White River Basin fly fishermen, the drought that gripped the Ozarks in the late 1990’s and early 2000’s was, in a sense, a paradox. The initial phase of this incessantly dry period was welcomed by local anglers eager for a change from the high water of the early parts of the ‘90’s. Fishing was excellent for many months after the Corp of Engineers started shutting the water down regularly during the spring of 1997. At that point, no one could foresee the crisis that would slowly develop over the next five to seven years. During its peak, this drought threatened the very fabric of the quality tailwater fisheries in the Ozarks, but it all started out with wade-fishermen rejoicing because conditions were turning in their favor for the first time in quite awhile.

From 1997 until the fall of 1999, anglers enjoyed many low-water weekends, and during the milder times of year when power demand was limited, the water would be low for weeks on end. Wading became “the norm”, and over these two years, fishermen could usually expect good fishing and manageable water most of the time. 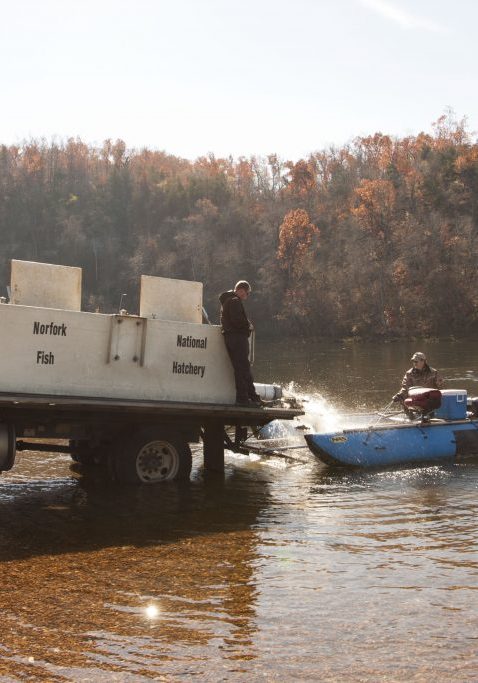 Even though lake levels were usually at or below normal levels throughout this period, the situation was not so dire that water releases were curtailed altogether – rather, everything pretty much operated normally. Power would be generated as needed, and the fisheries were never really in danger of collapse due to prolonged low water. Rains were still able to recharge the lakes during the winters, and this allowed the Corp to keep the rivers watered. Still, flooding was non-existent for quite a long time.

Towards the end of 1999, the Corp started to press their luck. Although the Ozark region was dry, there had been enough precipitation over the previous two years to keep the fisheries in good shape; but the lake levels started to freefall just a few months before the turn of the century, especially on Bull Shoals. During the mild fall and early winter season, power was generated nearly every day, and this caused the lake to drop several more feet during a time when recharge usually starts to occur.

By New Years Day 2000, Bull Shoals Lake was close to ten-foot low and Norfork Lake was nearly five-feet low. These types of deficits are common around Christmastime, as winter and spring rains almost always fill the lakes back up by early spring. In fact, there were no stories floating around that told of what actually happens if the reservoirs stay significantly low well into the spring, so it appeared that such a scenario was not something taken seriously by the Corp and other water management agencies – in their minds, a drought like this was virtually impossible. Unfortunately, we were about to find out just how quickly a drought can take hold and threaten strong coldwater fisheries, and the situation would deteriorate until a few last-minute miracles saved these rivers from a total loss.

The Corps of Engineering Reacts

By February of 2000, the Corp finally realized that something was amiss, so their first response was to shut the dams down indefinitely. The weather was really mild throughout that winter, and the year’s early fishing was incredible. After weeks of low water, the trout became very comfortable with feeding during those conditions. It is hard to believe how distant a memory such fishing would quickly become. Most likely, the Corp felt that the lack of rain was a temporary blip, but they stopped taking any chances by March. Still, the mood in the area was more of concern than panic.

March of 2000 was the demarcation point when people in the Ozarks started talking about the magnitude of the current drought. The scenario had been developing for several years, but this was the first time in recent memory when fall and winter had passed with almost no precipitation. Starting on the first of March, the water was ‘off’ successively at Bull Shoals Dam for [at least] 30 days without so much as a drop released. Fortunately,the weather had not become really warm yet, but the possibility of having no cold water to share with the trout during the hot periods of late spring and summer was starting to make everyone with an interest in these fisheries very nervous. Ironically, Norfork ran decent amounts of water almost every day that March, which was reflective of the fact that Norfork Lake was the “least low” of the five reservoirs in the White River System.

By the start of April, a crisis was emerging. No significant rains fell during March, and temperatures were starting to warm up rapidly. Anglers and politicians were starting to realize that with each day that passed with no rain, the White River System was one day closer to a total collapse. Water temperatures at the Wildcat Shoals Access were well into the 60’s by mid April, and fishing for trout below Cotter was severely compromised – most of the fish either bolted in search of colder water or died in their tracks. If things were this bad just halfway through April, what was going to happen if the water stayed low for days on end when it gets above 90-degrees outside? No one wanted to think about that possibility, but we were all forced to – disaster was only two months away.

Fishing remained excellent on both the upper White River and the Norfork Tailwater during April of 2000, but the lower White was starting to really suffer from warm water and low oxygen. Keep in mind, not one extra drop of water besides the minimum-flow had been released in over a month at this point, so the rivers were significantly lower than what would normally be seen during typical low-water conditions. The public and state politicians were growing restless when the Corp finally publically addressed the drought situation. Their immediate plan was to run “fish water” every day for an hour or two. Although this did help on the Norfork and the upper 20-miles of the White, once that light flow would hit Cotter, all it did was cover extremely hot rocks and gravel for a short amount of time, and this would often aggravate the already devastating water temperature issues. These releases were merely a band-aid for a problem worthy of an intensive care unit.

May of 2000 was one of the saddest months in the history of Ozark trout fishing. Water temperatures were so warm on the White that decent trout fishing was only possible within a few miles of the Bull Shoals Dam. At Buffalo City, it was warm enough to wet-wade at night, which made for some great crayfish hunting. Norfork, because of its short length, was doing better than the White, but since the ‘Fork was the only game in town, crowding was a real problem. Although the Norfork was loaded with nice fish seeking colder water, and big browns were stacked at the confluence just trying to survive, many unscrupulous fishermen took advantage of the situation by slaughtering hundreds of browns that were basically trapped. A technique called “herding” is very effective at decimating concentrated populations of big fish. By late May, it was common to see dead browns and rainbows on the bottom of both rivers, and tourism finally started taking a huge hit. With absolutely no water to spare in the lakes, everyone was now forced to wait and hope. Considering the fact that we needed ten-inches of widespread rain in order to keep cold water in the rivers all summer, the situation was looking dire.

The situation really bottomed out when fly fishermen started complaining about too much low water. The trout had become very lethargic and spooky, and the overall consensus was that both rivers were going to take years to recover. Some guides decided to halt all trips until conditions became favorable for trout survival again, and very few river businesses were doing much of anything. Early June saw a few severe thunderstorms, but the ground was so dry that the lakes would hardly rise an inch after a strong precipitation event.

What happened next must be considered one of the great miracles in the history of the White River Basin. Around the 20th of June, the entire Ozark region got pounded with double-digit rainfall totals. This was not a prolonged event, either. In less than twelve hours, over ten-inches of new rain fell, and within a week, Norfork was back up to power pool. Bull Shoals and Table Rock received enough inflow to run normal amounts of water all summer. The Ozark trout fishing heritage was almost completely lost, and within 24 hours, all seemed well again. Still, it was going to take years to replace the classes of trophy fish that were lost forever, and there was a distinct “recovery period” that took place over the following years. But everyone realized that this could have been exponentially worse.

The Ozarks did not officially break out of its drought cycle completely until 2003 and 2004, but we never faced a major crisis after the spring of 2000. 2001 and 2002 were decent years with plenty of low water for wading and plenty of water in the lakes to keep the rivers fresh. This cycle has switched around completely since 2005, and it is hard to imagine what a low-water stint would feel like after the recent, unprecedented flooding of 2008 and 2009. The Corp of Engineers is now far more conservative with their water management practices during dry periods, and at least they seem willing to learn from history. There is no way to go back in time and fix all the mistakes that led to the major drought of the early 2000’s, but the fact that efforts are being made to prevent such a significant drought from occurring again in the future is somewhat comforting. Still, the power of man pales in comparison to that of nature, so the threat of devastating floods and drought is always present. The White River Basin Water Control System does an amazing job of minimizing the impact of extreme weather, but there is only so much that can be done when nature decides to get nasty.

White River Trout Conservation The good, the bad and the ugly Imagine having a wonderful vegetable garden that is the envy of all the other gardeners in the country. For several years, produce flourishes as the garden grows very quickly under optimal conditions. After...

Planning A Trip Planning the Perfect White River Fly Fishing Trip Unfortunately, the unpredictable nature of the White River Basin trout fisheries makes it difficult when planning a trip for a vacation far in advance. There is no way to know exactly what will happen...

New Presentation The Extended Drift Presentation: A new twist on an old technique This new presentation will change the way that you think about how you drift a fly. For some of you, this will sound strange, but techniques evolve as new generations of anglers move...