I hope that everyone is enjoying the holiday season. We are having lots of fun with family, and I am eagerly anticipating the birth of my second child – the time is drawing near! It is amazing how everything else seems inconsequential when compared to our kids.

It rained pretty much all day for the last two days, but the really heavy precipitation stayed well to the south. The only lake to receive any significant runoff was Greers Ferry. Because of the flooding in central Arkansas, the Corp has cut back on flows at Bull Shoals and Norfork Dams. What is strange is that they have not shut the water all the way off. Rather, they have run the equivalent of an “easy” two units on the White, and Norfork has run at the half a unit level all day today. Fishing is probably excellent, as the fish will tend to turn on when the water drops to a steady level subsequent to a long stint of heavy water. If you have a chance to get over there, think about trying some size #16 to #18 tungsten zebra-midges in the slack-water areas. Micro San Juan worms in fluorescent red and worm brown should be hot, as long as the water stays low. At current levels, you can find some wading spots, but it is best to drift or wade near the boat.

It is hard to say how long this reprieve will last in Arkansas, but barring additional heavy rains over those same areas that were hit this week, flows will probably remain minimal for the next three to five days – but don’t hold me to that. Water levels have been all over the place on Lake Taneycomo since it started raining, but flows rarely exceed the two unit level, and there have been some periods when the river gets down to a “light” one-unit stage. Fishing has been good to excellent over the last week, ever since the amount of water released was reduced. I’m not crazy about the times when the flow seems to change significantly every hour, but the trout are going nuts when the water starts to come back up. It may sound like a broken-record, but San Juan worms are producing most of the nicer fish. Big sow bugs and zebra-midges are also pulling their share. During those periods when the river gets slow, I like to use a micro worm dropped from a size #10 scud or sow bug. Once the water comes back up, I will switch to a rig with a split-shot.

Taneycomo fishes a little differently that the White and the Norfork in the respect that the trout thrive on consistency. Since the water has been running for so long without any breaks, the fish are really comfortable and feeding steadily. Hopefully this trend will continue, although I would not mind seeing some low water, as it is nice to wade once in awhile. Even though there are numerous good places to wade on Taneycomo right now, it’s nothing like the freedom of movement we experience when they aren’t running a drop.

Fishing should be excellent over the holiday and the weekend, so it is definitely a good time to head down to Branson for some trout fishing. I have added several new articles to the Web site, so be sure to check those out, and I will be sending out a newsletter once or twice a month. There will also be an online addition of the newsletter available on the site – to receive the full version, sign up on the bottom of the Home Page, the Taneycomo Page, or the Contact Page. Give me a call of drop me an email if you have any questions. 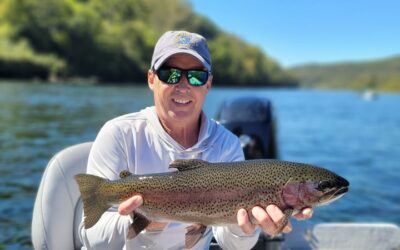 White River Fishing Report - August 5-7, 2020 White River Waves August 5, 2020 We are still getting a little opportunity to enjoy some unseasonably cooler weather here in the Ozarks. So far this week the mornings have been cool and the bite has been steady. Jeremy was...

White River Fishing Report May 22 & 23, 2020 Emily's Day The start of Memorial Day Weekend brought in a bunch more than crowds of Americans honoring the fallen men and women that served in the U.S. military. Crowds of vacation goers ready to break out the...