The Fishing Conditions on Lake Taneycomo

From the heart and honesty is always the best policy: Water and fishing conditions on Lake Taneycomo have been ideal for August, but despite that bit of good luck, the fish have been fickle and the bite has been slower than one would expect.

I want to apologize for the lapse in reports this month. This was a direct result of the fact that my August guide schedule was much busier than normal. As a one-man operation, I can only do so much, but I want to remind all my readers that I do not mind taking phone calls (preferably in the evening) or answering emails regarding current fishing conditions.

So, if you are in need of immediate and up to the minute information, never hesitate to contact me. Because of the ever-changing nature of the rivers I guide on, coupled with the fact that we are within relatively close proximity to a number of large municipalities, I want everyone to fully understand that I will do my best to be accessible to answer any and all questions in the event that you want to know what to expect if a spur of the moment trip pops up. 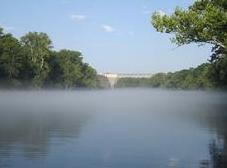 Because of Table Rock Lake’s position in the geographical middle of the White River Chain of impoundments, when spring rains are excessively heavy like what was experienced this year, one of the Corp of Engineers’ first priorities is to drop the level in the impoundment as quickly as possible. What this means for visitors is that while the lower White River and Norfork Tailwater in Arkansas are still releasing heavy water pretty much around the clock because the dams have had to hold back to minimize flooding last spring and the reservoirs are still high, Lake Taneycomo is right at power pool, so releases have been minimal or light every day for the month of August.

Because of Table Rock Lake’s position in the geographical middle of the White River Chain of impoundments, when spring rains are excessively heavy like what was experienced this year, one of the Corp of Engineers’ first priorities is to drop the level in the impoundment as quickly as possible. What this means for visitors is that while the lower White River and Norfork Tailwater in Arkansas are still releasing heavy water pretty much around the clock because the dams have had to hold back to minimize flooding last spring and the reservoirs are still high, Lake Taneycomo is right at power pool, so releases have been minimal or light every day for the month of August. This type of pattern should be great for fishing, but this has not really been the case on this enigmatic White River Basin tailwater trout fishery. In all honesty, the bite has been slow most days and success requires that anglers try many different flies and techniques until they are able to dial in on what exactly the fish are looking for.

The above scenario might be disappointing to some, but in actuality, challenging fishing is a good thing for those fishing on their own, guides and their clients. There are many places like trout parks and “pay-to-play” hatcheries where fishermen can go if they just want to catch one trout after another, but when it comes to learning and becoming an overall better fly fisher, it is in everyone’s best interest to have some tough outings sprinkled in with the normally action-filled days that occur quite often on the White River, the Norfork Tailwater and Lake Taneycomo. Plus, there is no doubt that the fishing will turn around drastically when the weather starts to cool in September.

Not many people are aware of this fact, but September and early October are usually the best months in the Ozarks for fishing terrestrial patterns and a variety of smallish dry flies. Keep this in mind when planning a trip; most anglers think that October/November is prime time, but in my experience, the bite in September trumps those other months with respect to consistency, lack of crowds, good water quality and locating big fish on the move. 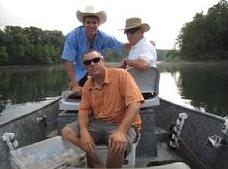 My contacts in Arkansas are lamenting about the excessive high water right now, and although the fishing is pretty much always good on either the White or the Norfork, flows will likely be heavy at least until October. Lake Norfork is eleven feet above power pool and Bull Shoals Lake is twenty feet above power pool – plus, these reservoirs are not dropping very fast due to recent storms that have dumped a lot of water across the region. 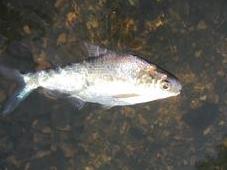 Norfork will start offering up some wading conditions before the White, but regardless, Taneycomo will be the place for walk-in fishing for quite awhile. Currently, releases have been starting between 11am and 2pm and range from the one to three-unit level for the rest of the day. Table Rock Dam is shutting down around 8pm. I am seeing some really big rainbows, and there are also some browns making their way upstream; they should start staging from Fall Creek up to the Boat Ramp in the State Park over the next few weeks.

The new moon is coming up very soon, so the brown run is likely to really get going around the end of September when the moon turns full. Because I don’t participate in the spawning foray up around the outlets, I will likely start heading down to Arkansas for the good part of October and primarily fish well below the outlets or at night if I fish at Taneycomo.

Fishing from a Guide’s
Perspective on Lake Taneycomo

Another unique aspect to 2011 was how dingy the water was on Lake Taneycomo due to the incredible spring floods. The water is just now starting to really clear up, but that may make the bigger fish a little spookier.

I do want to briefly talk about an interesting guide trip I had this month that exemplifies why ‘hey-day’ fishing isn’t always the in an angler’s best interest on a guide trip. During a multiple-day outing with a guy I guided down in Arkansas last year (when the fishing was spectacular), I had to start things out by explaining that Taneycomo was the best option, albeit, the fishing had been slow. He was hesitant at first, but over the course of his time on the water, he caught plenty of nice fish. 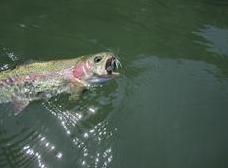 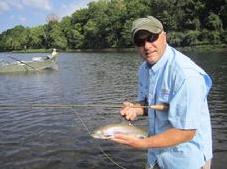 That is always good from a guide’s perspective, but what made the whole endeavor worthwhile was when he explained that it was a blast catching gaudy numbers of fish on the White and Norfork last year, but he was even more pleased with his time on Taney because he got to witness how a professional adapts to lethargic fish, and he also was able to learn a plethora of advanced techniques that we wouldn’t have had to utilize if the fish were extremely active.

The whole experience made him more prepared when it comes to approaching other fisheries around the country, and he said he felt like he was a much better angler at the end of his stay than he was when we started.

To me, that is what it’s all about, and there are always going to be times in the Ozarks (or any coldwater river) when suspending a scud, sow bug or midge isn’t going to produce very well. This is why it is so critical to do your homework and search for guides who spend most of their personal free time fishing on their own because these are the guys who know what to try when the standard patterns are no longer doing the trick.

Look for a newsletter in the next couple of days, and always remember that I am willing to split up your guide days based on weather and water fishing conditions on Lake Taneycomo. Also, the night fishing opportunities for big fish are just around the corner, and I am privy to where there are a lot of pigs stacked up. As far as I know, I’m the only guide offering both walk-in and drift trips beneath the stars when the river is empty. 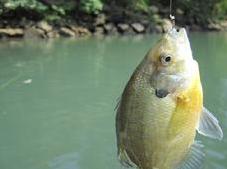 Lastly, if you do find yourself on Taneycomo on your own in the near future, keep in mind that they are doing some weird things with the flows at the upper (Table Rock) and lower dams (Powersite) during periods of zero generation at Table Rock. There is almost no current, and if the wind blows upstream, the tailwater resembles a very skinny lake. It is still possible to catch trout using nymphs below an indicator at these times, but remember that you have to let your fly sit until a cruising fish finds it…if this is just too slow for you, giving your line a little strip every 15 to 30 seconds can incite a bite, and stripping flies like soft hackles, Wooly Buggers and Cracklebacks can also do the trick when upper Lake Taneycomo becomes a still water fishery. Understanding the unique dynamics of all the rivers I fish is a never ending process, and this is also why these rivers never gets boring…even after fifteen years of fishing these parts, I learn and see new things every day.

Click Facebook, If you really liked this article, +1 above – check us out at +flysandguides (Google+) or send us a tweet with a question or just to say hi. You can also learn more about fishing conditions on Lake Taneycomo and other fly fishing tips by subscribing to our newsletter!