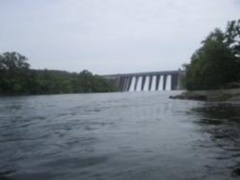 Despite the recent rains, the chances of catching big browns are as good as ever

Catching big browns has a lot to do with the current water conditions. The flooding in the Mississippi Delta has been making national news for weeks now, and considering that the White River is a major tributary of this country’s largest of waterways, it is no surprise that we have had our fair share of rain in the Ozarks, as well. In the upcoming newsletter, I will go into to greater depth into how the flood control system works on the White and its tributaries, but in a nutshell: the periods after flooding events often are marked with low and clear water right below the dams. This is because the White River System projects have operational priorities, and their main purpose is to hold water back in order to minimize downstream flooding.

Once the lakes crest, then the Corp of Engineers will let loose and start lowering the reservoirs down to power pool. Of course, a massive flood like we had around the beginning of May requires the use of extreme measures like the opening of the flood gates for a few days, but during a typical spring flood period, Beaver and Table Rock Dams dump their excess water into Bull Shoals reservoirs slowly, and there can be periods where the water on the lower White River will run remarkably light. During these times, the fishing can be fantastic.

The first two weeks of May were excellent on the White River with releases in the one to three unit ranges. Now that the lakes are somewhat stabilized, flows have increased exponentially, and Bull Shoals Dam is running six units pretty much every day. Although the lower water earlier in the month offered up some good nymph and streamer fishing, now it is all about throwing large patterns that imitate baitfish, small trout and crawfish. 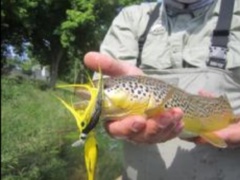 The fishing for browns has been excellent from the dam down to Wildcat Shoals, but at that point, the water becomes pretty dingy and the bite gets tough. 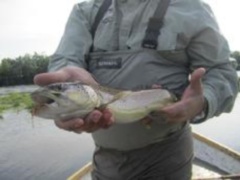 Norfork is running the equivalent of two units through the spillway gates because they are in the process of fixing the generators. I am crossing my fingers that the water doesn’t become too warm over there before the air temperatures rise consistently into the 80’s, and I’m hearing that more walleye, white bass and stripers are being caught than trout below Norfork Dam. This is a shame considering how well that river was fishing in March and April. Taneycomo Trout will keep everyone updated on the situation, and normally the ‘Fork fishes really well in the summer.

Keep your eyes peeled for an upcoming newsletter in the next day that will delve into greater detail regarding how flood control works on the White River tailwaters, and I will also be talking about what to expect over the next few months. There will also be several summer promotions offered and a slight policy change with respect to streamer fishing will be implemented. Even though there will be lots of high water this summer, that just means that catching big browns will be out of this world. 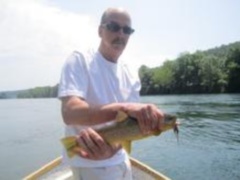 Most of my clients prefer to go after really big fish, and the conditions for this pursuit will be ideal if the flows remain heavy. If you are faint of heart, be sure to come prepared because there are few things in the world of fly fishing as exciting as seeing an eight pound (or bigger) brown trout chasing down a big streamer pattern.

Please do not hesitate to ask me about any aspects of trophy fishing with very large flies, and I take great pride in teaching anglers of all skill levels the art of going after big fish. For a guy who loves to chase down and hunt large brown trout on the White, I am extremely excited about the upcoming late spring and the entire summer.

Feel free to visit us on Facebook, If you really liked this article, +1 above – check us out at +flysandguides (Google+) or send us a tweet with a question or just to say hi. Check out the Fly of the Month! You can keep learning about why catching big browns is so good and other fly fishing tips by subscribing to our newsletter!