As the lakes start to creep up, Ozark water flows are becoming inconsistent on the rivers. 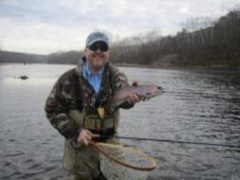 I love the busy fly fishing season in the Ozarks.

What a wild last two weeks it has been on the White River, Lake Taneycomo and the Norfork Tailwater. Between driving back and forth from Branson to northern Arkansas for guide trips, while getting ready for my Sow Bug Roundup streamer presentation, I haven’t had much time to just relax…and I’m still producing commercial fly orders by the 1000’s. This is what being a guide is about, and in no way am I complaining. I love the busy season in the Ozarks, and compared to fisheries out East and out West, where they may really only have a three-month peak, we have good, clear water to fish almost every day of the year. That is one of the most unique attributes of these tailwaters, and because water levels vary so much from day to day and year to year, there is always something new to learn. Once an angler thinks that they know it all with respect to the sport of fly fishing, it’s time to hang up the waders and find something else to do; the constant learning and adaptations that accompany fishing any river, lake or stream are what being on the water is all about.

Although we haven’t had a lot of rain this month, the area has seen enough precipitation to cause the lakes to come up several feet – Bull Shoals, Table Rock and Norfork Reservoirs are still around four to five feet below power pool levels, but that can change in a heartbeat. With several notoriously wet months ahead of us, the Corp of Engineers is in a position where they can run water when there is electrical demand, and this March has been no different than any other March in the past where the water runs all day at one of the dams. But Ozark water flows have not been excessively high during periods of generation. This year, releases have primarily toggled between Table Rock and Bull Shoals Dams. There have been several extended periods of low water below at each of these tailwaters where the water stayed low for days on end, but like usual, we expect the unexpected. Conversely, very little water has been let through Norfork Dam this month, so there has always been a place for those who are restricted to wading to go and wet a fly. 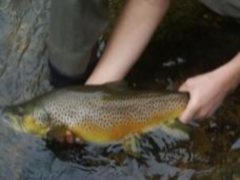 During periods of low water, the fishing has been outstanding anywhere on the White and below the upper boat ramp on Lake Taneycomo. There are not too many times during the year where it is possible to simply suspend a nymph below a strike indicator and catch one after another, but this is how I would describe the fishing when the water has been off during the first three weeks of this month. Of course, when you start getting into high numbers of fish, it seems like the amount of big ones that are encountered takes a nose dive, but this is to be expected, as high-water is when the most lunkers are normally hooked. This is reflected in the pictures I have put up; all the browns were caught on running water on the White (except for the one the youngster is holding up – that came out of Dry Run Creek after my presentation at the Sow Bug Roundup), and the chunky rainbow was landed on Lake Taneycomo when we were doing some wading with one generator running. Still, the low-water days were an absolute blast, and when my clients literally catch respectable trout until their arms are sore, it makes you forget about all of those tough days when the fish had lockjaw. 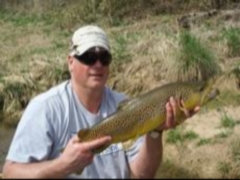 On Monday (yesterday), when I put the boat in at Wildcat Shoals, the water started coming up almost immediately. The Southwest Power Administration forecast, which is known for being inaccurate, gave the impression that one or two units were going to be operating, so this rise was not a big surprise. But when flows crested at the four-unit level, I wasn’t sure exactly what was going to happen. By the time we got rigged and headed downstream, the river was running a ‘nice’ shade of brown – this is not normally what you want. But in typical, enigmatic White River fashion, the browns were extremely aggressive, and we caught four that ranged from 20 to 24-inches, including a good one in the first twenty minutes, which started the day off right. Since the water had been low for four straight days prior to this point, the browns most likely had been lounging in the deep holes and did not feed a lot. Then, when the water came up, these predators turned on and became aggressive. Many fly fishermen think that black flies are the way to go in dark water, but we nailed all those big brown trout on Bucktail Rainbow Streamers.

After our White River float, I decided to take my clients over to the Norfork. We fished the upper end for a couple hours while the river was low and then the water started coming up around 5pm. The flow was extremely trashy because so many people had been wading over there for weeks on end, but just like on the White, this dynamic caused the bigger fish to start feeding, and we caught another trophy brown. All in all, it was a great day, but I am a bit concerned by the amount of didymo that was floating down the White. This invasive species of algae can form mats on the river bottom that suffocate aquatic insects, and didymo negatively affected the growth rates on the White River’s rainbow trout population several years ago. Long periods of really high water seem to flush it out, but I just hope that this isn’t a negative trend. Like always, I want to paint a realistic picture of the fisheries I work and play on. There are ways to avoid or minimize how didymo affects the fishing on any given day, and I will keep everyone updated on the situation. So far, there has been no didymo seen on Lake Taneycomo, and there is almost none on the Norfork. In order to keep it this way, anglers need to wash their waders whenever they switch from one fishery to another, and there are new, non-felt wading boots available that are designed to inhibit the transport of this nasty stuff. Everyone can make a difference when it comes to curtailing the spread of didymo. 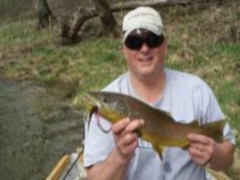 I appreciate the large turnout for my streamer presentation at the Sow Bug Roundup.

I want to thank all the people who have bought one of my fly kits lately, and I also appreciate the large turnout for my streamer presentation at the Sow Bug Roundup – it was encouraging to speak to a standing-room only crowd. If you were not able to make it this year, there is a link below to the entire presentation (entitled “Part 2”. “Part “1” includes excerpts from last year’s event). From a fishing perspective, look for the action to continue as long as there are no big rains across the region. The bite is on, and late March through April offer up some very good opportunities to catch a lot of fish and big fish; in many ways, April is the perfect month to fish the White River Basin because of the mild weather and active trout. Please feel free to call or email me if you have any further questions.

Feel free to visit us on Facebook, If you really liked this article, +1 above – check us out at +flysandguides (Google+) or send us a tweet with a question or just to say hi. Check out the Fly of the Month! You can keep learning about the Ozark water flows and other fly fishing tips by subscribing to our newsletter!