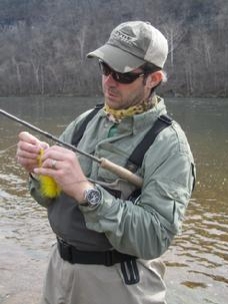 Even though there have been some moderate rains across the region since the last report, all of the lakes in the White River System are still below power pool, and the fly fishing the Ozark Reserviors remains fantastic on the White River, the Norfork Tailwater and Lake Taneycomo. Some water has been running on the White, but not very hard (one or two-unit levels), but below Table Rock and Norfork Dams, the releases have minimal almost all day, every day, with the occasional spurt of “fish water” that lasts just a few hours in the early morning or evening hours. Anglers have plenty of choices when it comes to finding good spots to wade, although the wind direction is playing a major role in the quality of the fishing. 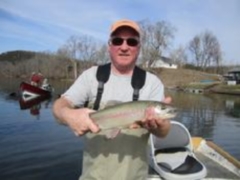 The winds can effect the quality of fishing, but not for professional guide Jeremy Hunt and the boys from Eastern Fly Fishing Magazine.

A good example of how blustery winds can affect the quality of the fishing occurred last week when I took a small crew of writers and photographers from Eastern Fly Fishing Magazine out on upper Taneycomo. This bi-monthly publication does a feature article in each issue, and several of these pieces are going to focus on fisheries in the Ozarks. Usually when the cameras are rolling, it puts a lot of added pressure on a guide, and the fish get lockjaw, but lucky for me, Taneycomo fished very well that day despite the strong upstream winds. Because this tailwater is technically a lake with a smaller dam (Powersite) some 22-miles downstream of Table Rock Dam, there are long stretches of water, even in the trophy area, that are extremely slow with respect to current. That current dies when the wind blows upstream towards Table Rock Dam, so fishermen must either seek out the areas where there is some moving water, or they must exercise patience when using a nymph in spots where the current slacks off. We fished both type of scenarios, and as long as a fly was kept suspended in the water, the wind chop on the surface gave an irresistible action to the pattern that would result in a bite on virtually every cast; we actually did best in the afternoon fishing some extremely slow water. There were some good pictures taken and video footage shot, and I am looking forward to seeing what the finished product looks like both visually and in print. 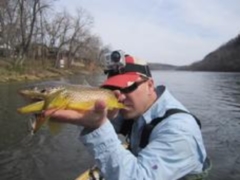 Catching trout on the White River at Rim Shoals.

Several guys I fished with about a week and a half ago are coming back for another round this upcoming weekend. These were the fishermen that caught trout until their arms were sore on the White River at Rim Shoals, and they obviously recognize that when fishing is out of this world on these rivers, you have to take advantage because the dynamics can change quickly. It is always nice to be on the water a lot when the bite is on, and as long as the lakes don’t start coming up radically, the trend of a good morning bite and slaying fish in the afternoon will continue. You may recall from the previous report, when I took these last guys out last time, we prospered because the wind was blowing upstream (even though that direction of wind makes for ‘awkward’ conditions on Lake Taneycomo), and this just goes to illustrate how wind direction plays such a major role when the water is low. 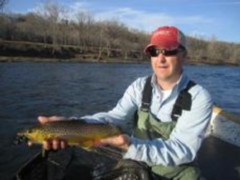 Most of the fishing I’ve been a part of over the last two weeks has been on Taneycomo, and it is on fire right now. Tungsten beaded Zebra Midges are all you need if the water is low, but any number of weighted nymphs will work. The same flies will produce in Arkansas, as well, and we are getting closer to the time when bugs will start hatching down there, so don’t be afraid to try subsurface imitations of traditional spring insects. Reports are that the fishing on the White and Norfork is also smoking, so we are truly in a rare period when all the rivers I guide and fish on are in prime shape. Many of the fish we are catching are of respectable size, with the occasional trophy; and I’ve been spotting some pigs when fishing out of the drift boat, so there is no doubt that there are world-class fish still in these tailwater fisheries. 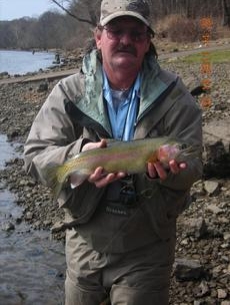 As many of you may know, we are extending the fly tying classes at Shepherd of the Hills Hatchery below Table Rock Dam throughout the spring and summer. The upcoming class is on Saturday, March 12th from 2pm to 4pm. White River legend Tom Rogers (of TNT fly fishing in Cotter, Arkansas) will be the special guest, and you don’t want to miss out on learning from this extremely creative fly tier who is known for focusing on creating very realistic patterns that are also somewhat easy to tie. I know there will be plenty of stories told, and you won’t want to miss out on meeting such a character and learning the savvy tricks of such a passionate fly angler with over 20 years of White River Basin experience.

Feel free to visit us on Facebook, If you really liked this article, +1 above – check us out at +flysandguides (Google+) or send us a tweet with a question or just to say hi. Check out the Fly of the Month! You can keep learning about conditions in the Ozark Reserviors and other fly fishing tips by subscribing to our newsletter!