Here’s our recap for an important meeting regarding potential didymo problem in the Ozarks and an exciting new fly fishing opportunity in Missouri through Flys and Guides. 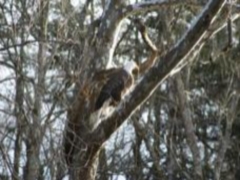 Potential Didymo Problem in the Ozarks.

You may be aware of the Dydimo problem on the Taneycomo and those who have fly fished on upper Lake Taneycomo have dealt with this ‘nuisance’ below Table Rock Dam for many years: the influx of small stocker rainbow trout that are periodically stocked on the tailwater from the Federal hatchery in Neosho, Missouri. There eight to 12-inch fish seem to be put into the river by the thousands several times annually, and the fact that the Federal stockers ‘bows don’t fight hard, lack color and have a tendency to ‘steal’ flies away from the bigger trout can make the fishing experience on Taneycomo somewhat annoying for everyone who is used to catching the chunky, uniquely-colored and exceptionally strong fish that are the ‘norm’ for most of the year. Unfortunately, the upper section has become inundated with these cookie-cutter stockers of late, as we recently found out on a guide trip last weekend.

It may come off as being spoiled to complain about days where my clients get a bite on virtually every drift, and in reality, such an experience can be a real confidence builder for those new to the sport, but for those anglers who have grown accustomed to the fantastic fly fishing on Lake Taneycomo, catching one stocker after another can end up being a bit of a letdown. Luckily for my customers that I had out last week, they did get into a few really nice rainbows in the 18-inch range, and we did end up having a wonderful day on the water. But I did want to forewarn the people planning on a trip down to Branson to take advantage of the daily low water that these small stockers are virtually everywhere. The best way to target the bigger trout that are around is to use large streamers and gaudy dry flies, as playing the ‘numbers game’ gets old when the sheer amounts of freshly stocked trout are so high.

I’m sure a lot of you are wondering why a river that is always loaded with tons of fish would need any more, and the answer to this question is somewhat complicated. Before the slot-limit was implemented on the upper three miles of the tailwater, Taneycomo was known for being a small rainbow ‘factory’, and the practice of dumping Federally-raised fish from the facility in Neosho has been going on for years to ensure a prolific put-and-take fishery. The trout that come from the state-run Shepherd of the Hills hatchery below Table Rock Dam are stocked at larger sizes; so large, that anglers wishing to take a few rainbows under twelve inches home to eat often have a hard time finding any that small. So, the Federal stocking program serves both an outdated and functional purpose, and there are some upsides to this practice. First off, this abundance of small rainbows act as a forage base for Taneycomo’s big browns, and this is one main reason that the brown trout grow so big so quickly. Another plus for the Federal rainbows is that they also grow fast because of all the scuds and sow bugs, and this makes Taneycomo one of the least likely places to get skunked in the world of trout fishing. On the downside, having so many fish in the river can put a strain on the habitat, but I am not a biologist, so I don’t know how much of a role this plays in the growth of the state-stocked browns and rainbows.

Usually, these periods of excessively small fish are only noticeable for several weeks to a month, depending on if the water is high or low and how much harvest is taking places. Regardless, the action is pretty intense right now, and I will keep my readers updated on the situation. We have started to see extended periods of low water, and this trend should continue with all the mild weather we are experiencing. If you like to wade pleasant days and catch loads of fish, the angling is hard to beat, and there are still plenty of big rainbows around to keep things interesting.

With more and more people travelling to fly fish different destinations, didymo is starting to become a serious problem on trout fisheries around the world. Didymo is an invasive form of algae that has the endearing nickname of “rock snot”. This is because it is a very slick substance that can literally suffocate the natural habitat of a river or lake and severely stifles the growth of underwater insects and other subsurface life forms. There is a long-running debate regarding how didymo is spread, but many biologists believe that it clings to waders, felt-soled wading boots and other gear that gets in contact with the water. Since this growth is harder to kill than a cockroach, it is imperative that anglers clean their gear before moving from one fishery to another.

Long stints of high water seem to help at eradicating didymo, but as soon the water slows and warms, it often comes back. In the mid 2000s, the Bull Shoals Tailwater became inundated with didymo, especially right below the dam. Although trout populations did not seem to decline, growth rates were negatively affected, most likely as a result of the dwindling numbers of scuds and sow bugs that were suffocated by huge mats of didymo – these food sources are what enable White River Basin trout to grow so fat. Midges seemed to fair pretty well, but over a three year period, catching a really big fish near the dam became a rarity. Several years of high water flushed the didymo out temporarily, but with this year’s impending low water, there is concern.

The Missouri Department of Conservation is holding several open houses in March and April to talk about the didymo issue, and all anglers who care about the future of our trout fisheries are encouraged to attend, if possible. Possible gear restrictions and other solutions will be discussed. If you cannot make it to one of these meetings, be sure to click this link to see the letter I received regarding this threat. 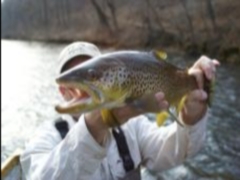 Flys and Guides is now offering hosted guide trips on the North Fork of the White River. 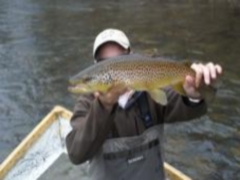 Many trout on the North Fork of the White River are wild.

The North Fork of the White is actually the headwaters of Norfork Lake and the Norfork Tailwater, and many of the river’s trout are wild – rainbows have not been stocked in years. It is possible to wade certain stretches, but the best way to experience this river is to drift fish while occasionally getting out at certain spots. Many anglers feel that the North Fork of the White fishes much more like a Western stream than its tailwater cousins, and water levels are only affected by runoff and spring influences. On our recent trip, we saw no other anglers, several bald eagles and we hooked into 18 inch (plus) rainbows and browns each day. It can be a challenging place to fly fish, at times, but the natural beauty and serenity of the surroundings make this river an extremely worthwhile fly fishing experience.

The Bull Shoals Tailwater (White River) and Norfork Tailwater are less than an hour away.

Over the next few weeks, I will be putting together two and three day package deals that include a day on the North Fork of the White River. The Bull Shoals Tailwater (White River) and Norfork Tailwater are less than an hour away, and there are several other trout streams within close proximity to the North Fork of the White. We will be staying at the lovely Dawt Mill Lodge, where they are known for their hearty breakfasts, comfortable riverfront accommodations and gourmet dinners. In the evenings, I will put on small presentations or fly tying classes after we enjoy a meal in a one of a kind setting. My favorite float on the North Fork of the White offers 14 miles of classic riffles, ‘diamond-chop’ runs and deep holes that hold browns upwards of 10 pounds. This takeout is right at the lodge, which makes for a convenient end to a day on a sparkling clear river. 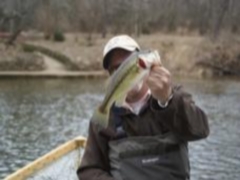 Endless angling opportunities to the best trout water in the Ozarks.

Prices have not been firmed up yet, but feel free to give me a call for an estimate, and keep in mind that anglers will play a role in deciding each day’s itinerary. Utilizing Dawt Mill as our lodging headquarters gives us endless angling opportunities to the best trout water in the Ozarks, and there are even chances to chase after smallmouth and largemouth bass.

Feel free to visit us on Facebook, If you really liked this article, +1 above – check us out at +flysandguides (Google+) or send us a tweet with a question or just to say hi. Check out the Fly of the Month! You can keep learning about the Dydimo problem on the Taneycomo and other fly fishing tips by subscribing to our newsletter!