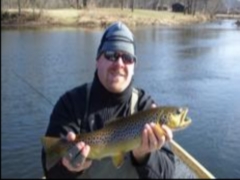 Dan from Michigan, happy to catch this brown trout in Arkansas

I hope that everyone has had a great holiday season so far, and it has been nice to spend time relaxing over this last weekend with my family and friends. The action has been hot fishing brown trout. Last Wednesday and Thursday I had the chance to guide a great guy named Dan from central Michigan in Arkansas. Because I only had one client in the boat, I also invited my friend and longtime White River guide, Tom Rogers, along for the trip. Although these two days on the water would eventually turn out to be some of the finest brown trout fishing I have ever witnessed on any of the Ozak coldwater rivers, it didn’t start out this way…

When Tom and I picked up Dan that first morning, I explained the options on the table: either fish the White for big brown trout, or go to the Norfork where we would likely catch lots of fish with the possibility of finding a lunker. Because many of my clients have caught plenty of small to medium-sized trout before, their usual answer is to go for the larger fish, but I make sure to explain that it will take plenty of work and perseverance in order to realize success. Dan was up for the challenge, so we put in at Wildcat Shoals Access with plans to float down to Cotter. Because Bull Shoals Dam had released light amounts of water over the entire previous night, I figured that the morning surge would just bring the flow up a few feet for a couple of hours, but since you never know what the water is going to look like on these rivers until you get to the ramp, I was a bit apprehensive. It turned out that my worries were well-founded. 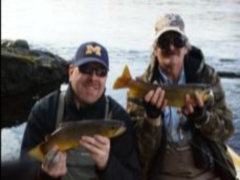 Even though the river looked perfect from the bank, as we pushed off, I noticed that the water was actually quite trashy as a result of the morning increase in power generation. Had I made a mistake in putting in at Wildcat? Only time would tell, but I can say that the constantly changing dynamics of the White River System will always cause guides to second guess themselves. For the first hour of the float I was a nervous wreck, but at least we were able to somewhat adapt to the situation by focusing on the slower seams along the banks, and we did catch a few smaller browns to keep things interesting. Because we were using streamers and shooting-heads, constantly getting ‘river-junk’ on the fly was not as big a deal as it would have been had we been nymphing, but it was still annoying, none the less. Around 1pm, the flow started to clean up, and the action turned on in a major way. Both anglers were hooking into or catching browns consistently, and many of these fish were pushing 18 to 20 inches. We ended up doing the float from Wildcat to Cotter twice that day, and the experience was one I won’t soon forget. Over 20 brown trout (and not one rainbow) were landed, and despite the fact that the water was a tad murky for the entire day, it was obvious that the browns are feeding heavily right now as they put on the weight they lost during the spawn. Also, the fact that we are rarely catching rainbows could be a sign of the “new norm” on the White, which is likely a result of the minimum-size restrictions on browns implemented at the beginning of 2009. Look for an article covering this subject in the next few weeks that discusses in detail how these new rules are enhancing a fishery that was in need of some help. 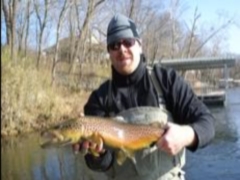 Pounding the banks with shooting-heads and eight-weight rods is exhausting, wear lighter gear.

Needless to say, a day of pounding the banks with shooting-heads and eight-weight rods is exhausting, especially if you are not used to fishing this way, so on the second morning, Dan was interested in possibly getting in on some more relaxing fishing with lighter gear. I’m the type of guide who always takes my client’s requests to heart, but I had to stress that you never know when another big-fish opportunity like this will present itself again on the White, so I told him that if he is truly after a trophy brown trout, our chances of making that goal a reality are far greater on the White than they are on the Norfork – plus, I reminded Dan that his sore arm will heal. That was all it took to make our decision regarding where to go, and the plan was to put in at Wildcat and float to Rim Shoals.

Unlike the day before, the water was crystal-clear and it was sunny. I was interested to see how these different conditions would affect the fishing. As it turned out, the bite was even better, and this just goes to show that when the fish are aggressively feeding, it doesn’t really matter how high (or low) the water is and what the weather is like. Of course, once these browns get their fill – which could take months – the dynamics of each individual day will start to play a bigger role with respect to how the fish are going to react. After the scare of the previous morning, I was far more relaxed on this day, and Dan ended up landing a 24-inch brown within the first hour and a half. Talk about taking the pressure off; even if we didn’t get another bite, the experience was already a big time success. After releasing that beauty, the fishing was very similar to the day before with steady action on browns of all sizes using streamers, although we did actually get into a few rainbows. The trick to effective streamer fishing is to have your fly land within inches of the bank, as this is where the greatest number of accessible big fish are holding right now. 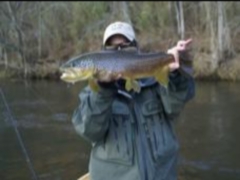 Those two days on the White River just before Christmas will always be etched in the memory of Dan, Tom and I. In my modest estimation, over 50 browns were landed between the two anglers, and we had scores of other chances. Not all of the trout we caught were big, but many were, and there was the ever-present feeling that a monster could be hooked at any moment. Winter is truly a special time in the Ozarks, and the fishing for browns seems to get better each day that I am out on the White. Truthfully, this could just be the start of an epic season because if some shad really start coming through the dam, every huge fish in the river is fair game, and hitting the shad kill just right is like nothing else in the world of fly fishing. January should be amazing as long as the water keeps running on the White, and even though throwing big streamers is not for everyone, it is the best method that I have found for regularly finding and hooking big fish because you are able to cover far more water than is possible with a nymph, and most dinky trout won’t go after large flies. Once the word gets out about the number of nice browns that my clients (and friends) are catching, my schedule will likely get busier, so now is the time to think about booking a trip if you are at all interested in the incredibly enjoyable and unique fishing that is happening right now. 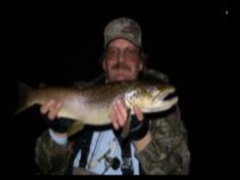 Learn more about fly fishing in the Ozarks with Jeremy Hunt

Please feel free to give me a call or send off an email for any questions regarding the specifics of winter fly fishing in the Ozarks. Also, keep in mind that any of our promotions that we currently have running (scroll down this page to see all the deals) can be booked at the current rates with no time restrictions, as long as you make your reservations by the end of December, 2010… act now to take advantage of these rare price breaks.

Feel free to visit us on Facebook, If you really liked this article, +1 above – check us out at +flysandguides (Google+) or send us a tweet with a question or just to say hi. Check out the Fly of the Month! You can also learn more about fishing brown trout and other fly fishing tips by subscribing to our newsletter!