Rising oxygen levels have made for excellent fishing on the White River, Norfork Tailwater and Lake Taneycomo

Excellent trout fishing in southwest Missouri and Norther Arkansas. I hope that everyone has had an enjoyable Thanksgiving, and look for reports to be updated more frequently as we make our way through the holiday season and beyond. Table Rock, Bull Shoals and Norfork Lakes started to ‘turn’ several weeks ago which means that the water stored in each of the reservoirs basically flips over. This is a somewhat dynamic process; in just a short period of time, highly-oxygenated water at the top of a lake quickly sinks to the bottom where the flows that feed the rivers originate. 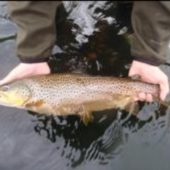 Although one would have to be a specialized hydrologist to know exactly how and why this occurrence takes place, the bottom line is that fishing has drastically improved over the last week after about three weeks of a tougher than average bite.

One of the most unique aspects of the White River Basin trout fisheries is that it is possible to catch high numbers of good fish in moderate weather 12 months a year (the average high temperature for Mountain Home, Arkansas is around 44 degrees in January); there is really no other place like it in the world. While most of the quality coldwater angling has pretty much dwindled everywhere else in the country, the Ozarks is just now entering one of its most exciting times of the year.

After the lakes have fully turned over, many big fish become ‘energized’ due to the fact that the water quality has improved exponentially, and before long, the possibility of a shad kill will be imminent. This event occurs when millions of threadfin and gizzard shad get sucked through the turbines at the dams which create a feeding frenzy that must be seen to be believed.

Normally, the ‘kill kicks off sometime in late January or early February, but the timing is directly tied in to what air temperatures have been like. Shad will congregate to the ‘warmer’ water at the bottom of the lakes after long spells of frigid weather, and the best shad kill fishing will be during high or falling water.

The way it looks for the rest of December and early into 2011, using white streamers will start to heat up a little later than average due to the fact that this fall has been slightly milder than normal. I will keep everyone updated on the shad kill via reports, and feel free to drop me a line if you are interested in discussing this phenomenon in greater depth.

Currently, fishing has been excellent on all of the rivers that I frequent, with standard nymphs providing the steadiest action, and we are starting to see some longer periods of low water on the White and the Norfork; Taneycomo has been a bit tougher when it comes to finding wading conditions, especially during the week, but this is likely to change in the near future. Because the region has been stuck in a high-water cycle for the previous three years, it will be interesting to see how things play out considering that all of the lakes in the system are around five feet below power pool. If there isn’t much in the way of rain over the next few months, expect for low water to be predominant, with the heaviest releases occurring in the early morning and right around dusk. Still, the Corp of Engineers likes to throw us anglers a curve ball now and again, so don’t be surprised if there are some periods where the water runs all day long. Predicting what will happen with regard to flows is an exercise in futility, and it is all about following generation trends, regional air temperatures and reservoir levels. Still, no one is right 100% of the time, but there is a system to figuring out what is likely to happen over the course of several days.

Please check out our calendar of events page for the dates and times of our fly tying classes. Whether you live close to Table Rock Dam and Shepherd of the Hills Trout Hatchery and can attend one (or more) of these functions or if you just want to make it to a class as a part of a Taneycomo fishing trip, we would love to see you stop on by. Also, I am putting together a winter promotion that will be available to everyone…this is my way of saying thanks to all of my readers, as this has been my best guiding year ever on the rivers.

Three days of guided fly fishing on the White River, the Norfork Tailwater or on Lake Taneycomo (depending on where the best fishing is) for the price of two days.

Two days of guided fly fishing on the White River, the Norfork Tailwater or on Lake Taneycomo (depending on where the best fishing is) for the price of $500.

*Also, at the end of the trips, anglers will have the opportunity to hand-select a dozen flies of their choice (excluding streamer patterns). This promotion will last until the end of January, but it may be extended if there is enough interest.

A lot of people don’t think about fly fishing in the middle of winter, but it is a different story in the Ozarks. Our rivers are loaded with fresh fish, crowds are minimal and perfect wading conditions are available virtually every day. Plus, winter is the season when fly anglers catch the biggest fish because of the ideal water conditions and overall lack of fishing pressure. Please don’t hesitate to let Taneycomo Trout help you make the most of this exciting opportunity.

Feel free to visit us on Facebook, If you really liked this article, +1 above – check us out at +flysandguides (Google+) or send us a tweet with a question or just to say hi. Check out the Fly of the Month! You can also learn more about trout fishing and other fly fishing tips by subscribing to our newsletter!