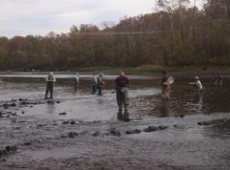 This Lake Taneycomo Fishing Report is full of great information. This morning I had the opportunity to chat with Clint, the man in charge of Shepherd of the Hills Trout Hatchery below Table Rock Dam. He is the authority when it comes to every aspect of this fishery, and our conversation was enlightening, to say the least. Basically, it is likely that the brown trout spawning run on Taneycomo is over for this year, but there will still be a few stragglers making their way towards their nursery waters, so anglers still have a shot of hooking into a behemoth right below the dam. There is a lot of ‘local’ chatter going around that makes the assertion that the run hasn’t even started yet, but according to observations and statistics accumulated (and analyzed) by hatchery personnel from this year and year’s past, the peak of the spawn was several weeks ago, so the number of browns on the upper end is most probably going to be on the decline. This would explain the fact that most of the fish on redds are gone, and it also confirms what I witnessed yesterday when it appeared that the pods of staging and spawning fish had virtually left the area overnight.

I want to cover a few other interesting tidbits that Clint and I discussed, and hopefully this will put an end to the majority of hearsay and conjecture that is circulating across the Internet and in fly fishing hangouts throughout the Ozark region. First off, 2010 was the first highly successful year for the brown trout spawning run on Lake Taneycomo since 2007. This is could have a little something to do with the trout getting used to utilizing the new fish ladder (installed circa 2006), but the primary reasons for this year’s success is mostly a result of decent amounts of high water, which allows the browns easy access to the fish ladder, coupled with favorable water temperatures in the tailwater. 2008 and 2009 were both incredibly high rainfall years, and when the Corp of Engineers is forced to release heavy flows over consecutive months, the reservoir can literally run out of cold water. During the prior two spawns, water temperatures in the river (and in the hatchery) were over 60-degrees by October; this is way over ideal incubation temperatures of 52-degrees or less. Interestingly, there were periods over the last two years when surface water temperatures on Table Rock Lake were exactly the same as the temperatures where water is drawn through the dam and into the river at the penstock level, which is over 160 feet deep.

Clint also mentioned that over 200 fish have been collected in the ‘pond’ above the fish ladder and very high-quality eggs and ‘milk’ have been collected so far, with more cultivation planned for the immediate future. He said there were plenty of huge fish that made it all the way back to the hatchery this year, and 80 made it up there just this last weekend alone – this explains where many of the pigs went to – here today, gone tomorrow, so to speak. Finally, we both talked about ways to improve returns through possible regulation changes, including simple ideas such as limiting anglers to one fly during the spawn and more radical concepts like closing key spawning areas like the outlets during the peak of the run. These issues will be officially discussed at Missouri Department of Conservation meetings next June, but there is never a bad time for making recommendations directly to the agency or through organizations like Trout Unlimited. Also, feel free to email me any thoughts that you may have. If everyone works together and looks at the big picture, there is a very good chance that some slight sacrifices by fishermen during the spawn could result in the resurrection of year-round trophy fishing like what was enjoyed 10 to 15 years ago. If I find out what type of returns were observed during that time period, I will be sure to let everyone know; my guess is that they were exponentially higher than what we are seeing currently.

A lot of people have been asking about when fly tying classes will be commencing for the late fall and winter, and after working out a bunch of details with John Miller at the hatchery, I finally have a definitive answer. The first class will be on Friday, November 19th between 2pm to 4pm at the hatchery, and this event will be an opportunity for everyone to share some big fish stories, as the meeting will start off with a mini-seminar discussing this year’s brown trout run. We will also tie up some of the most productive patterns, and this will likely be the only meeting of the year where a good percentage of time will be spent discussing fishing and flies in lieu of strictly tying. I know that many folks have to work on most Fridays (myself included), so starting in December, we will try and schedule the classes in the evenings or on the weekends.

The following month, the topic will be “Bull Shoals Tailwater [the White River] tactics, flies and techniques”, and this meeting will be on December 4th from 2pm to 4pm at the hatchery. Due to the popularity of these get-togethers, we will try to have at least two a month. I have also been talking to Phil Lilley about strengthening the Trout Unlimited Chapter here in Branson, and we are kicking around the idea of adding a fly tying component to those monthly meetings to encourage education and so that there is some time for relaxing and socializing after current business is conducted. I will keep everyone updated regarding our progress in this regard, along with posting dates and times for both the fly tying classes and TU meetings.

I’m excited about what I learned today from Clint at the hatchery, and it’s nice that these passionate trout gurus are so accessible and eager to talk about our beloved regional coldwater rivers. All trout fisheries go through their ups and downs, but the future for Lake Taneycomo looks bright, primarily because there is a renewed interest in restoring the upper end back to its “former glory”. Of course, the fishing right now is pretty spectacular, but there is always room for improvement. Tonight, I will be dreaming about the fun and excitement we had in 1998 and the possibility of being privy to that type of quality angling experience again in the near future. With a lot of work (and fun along the way), we will hopefully soon see another peak with big rainbows and browns stacked up literally everywhere below Table Rock Dam.

Feel free to visit us on Facebook, If you really liked this article, +1 above – check us out at +flysandguides (Google+) or send us a tweet with a question or just to say hi. Check out the Fly of the Month! You can also learn more about Lake Taneycomo Fishing Reports and other fly fishing tips by subscribing to our newsletter!