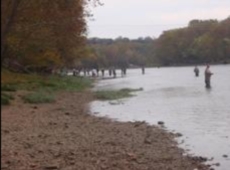 Although I haven’t been fishing Taneycomo a lot through the brown run, I do have quite a few things that I want to share with in this Lake Taneycomo Fishing Report. First off, I fished for a short time yesterday (Monday) on Taneycomo, primarily to see what type of activity is going on with respect to the brown run. Well, I’m happy to say that there are very few browns hanging out in the shallows between outlets number one and number two. My enthusiasm may be confusing to some of you, but I want everybody to check out the picture below with the hoards of fishermen stacked up in the outflow areas. These are the type of crowds I’ve been talking about, and I would rather that our “unique” strain of Taneycomo brown trout not have to deal with this type of circus for any longer than they have to.

A lot of locals are saying that the brown run is late this year, but considering that there were fish stacked in the upper end just a few weeks ago, coupled with the fact that hatchery outlet number three (the one equipped with a new fish ladder) is still loaded with big fish all the way up to the man made “spawning grounds” located in the new facility, it tells me that this may be it for this year’s brown trout ‘festivities’ on the river. I’ve been wrong before, but there is no denying that excessive pressure right below Table Rock Dam has had a negative influence on trout behavior in this now-famous stretch of water. Ten to fifteen years ago, there would be browns up there for over a month (or longer), and the numbers of fish was far greater than what we are seeing nowadays. This is what happens when easily accessible fisheries get exposed via print articles and the Internet (and I know I’m at fault here, too, but I try my best to be as responsible and truthful as possible), and it was inevitable that Lake Taneycomo’s ‘hey-day’ of the mid to late 1990’s couldn’t last forever, especially from a brown trout perspective.

My theory on all of this is that the browns have adapted to the fact that they have to run “a gauntlet” of waders to get to their nursery waters, and it’s possible that there will never again be runs like in the past…unless there are some sweeping changes made in how the far upper end of Taneycomo is managed during the typical spawning periods. Considering that this fishery is ‘artificial’, there will always be very nice trout throughout the entire tailwater, but it would be great to see those “wolf packs” of brown trout make a comeback. The fish ladder at outlet number three is a great start (but it is only trout accessible when there are two or more generators running), and this helps protect the “pseudo” wild strain of fish that is cultivated through the process of collecting roe (eggs) and ‘milk’ from trout that spend the majority of their lives in the river. I have decided to become far more active in the local Trout Unlimited chapter, and I invite everyone to join up if they are interested in seeing some real positive changes. Some of the possible solutions to this dilemma will not be popular, especially amongst those with a commercial interest in Lake Taneycomo, but there has to be a better way than what is displayed in the picture. Perhaps, a seasonal closing of the stretch from the cable down to the Rebar Hole is a possibility, or even restricting wading in this zone during the typical spawning times could work wonders. Who knows, but for the sake of promoting an ethical and quality fishing experience while educating the general public about their potential impact on the fishery, something needs to be done. The scene up there has become an embarrassment for everyone who puts maintaining this amazing fishery over their own personal vanity.

Teaching right from wrong is every experienced angler’s responsibility, and improving trout habitat should be a high priority. Something I witnessed the other day exemplifies this need. I saw a guy catch a HUGE rainbow (near an outlet, of course) in the 26 to 28-inch range, and he must have dropped this fish from a standing position at least seven times on dry gravel/rock while trying to get the perfect shot. Perhaps I will do another write up about how to take photographs without harming the fish at some point in the future, but I already feel like I’m coming off as preachy. Anyways, after this fisherman and his buddy got what they wanted, this once in a lifetime fish was released, but it’s likely that it is no longer alive for another person to enjoy. It is ironic that this rainbow was put back to begin with because after enduring a long fight and multiple photographic ‘mishaps’, it probably would have been just as well to throw it on a stringer. At least then, it would not be a complete waste. 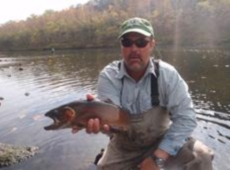 I’ve decided to write about tidbits of “inside” information in an effort to help my readers catch more fish, and this new feature will coincide with the “Guide Secrets” section exclusively available to those that subscribe to the newsletter. To start this off, I want to go back to that epic day I had while guiding on the Norfork last week. Mistakenly, I forgot to mention that we caught many of those nice fish in the catch and release section on dry flies. A lot of people think that surface activity peaks in the late spring and early summer, but the fact is, it’s possible to catch Ozark trout on dries any time of year when the water is low. True, the biggest bugs are out in the spring when temperatures really start to warm up, and this makes it much easier for anglers to catch fish on top because they can throw highly visible flies. During the fall and winter, most of the insects hatching are REALLY small which makes fishing the surface a much more difficult proposition for anglers of all skill levels.

A good strategy to realize some success when the hatches of midges and caddis are minuscule is to utilize “cluster” patterns like Cracklebacks and Griffith Gnats; both of these flies imitate groupings of midges that naturally cling to each other on all of the White River Basin tailwater trout fisheries. A lot of fishermen run into problems tying these patterns in such a way that will enable them to float high and dry, cast after cast. My tying solution is to utilize extra wraps of hackle and to pre-treat each fly with fly floatant or silicone the night before I plan on using it. The Cracklebacks that hammered fish on the Norfork last week were tied on a size #16 hook (the midges hatching were in the size #26 to size #40 range) and I used about 14 wraps of hackle – most fly tiers use half as many wraps. This fly was easy to see, even in moving and foamy water, and it took just a few false casts to dry it out for the next presentation. Even though it takes a bit more time to tie a Crackleback (or a Griffith’s Gnat) this way, it makes for much easier fishing in the long run. Little changes in how anglers approach the sport of fly fishing can make a huge difference in their success rates, and it makes little sense to tie dry flies that start to sink after just a drift or two.

Back to the fishing…

A few days ago, I had the rare opportunity to fish with Summer, so we pulled the drift boat down to the White River for a float from Bull Shoals Dam to Wildcat Shoals. The water was low when I put in at the dam, and we did fairly well fishing in the lower part of the catch and release area and in Bull Shoals State Park. At 4pm, several generators kicked on and we got stuck in trashy water. Summer and I don’t give up easily, and we methodically worked streamers along the bank and near structure until well after dark. The fishing wasn’t very good – in fact, it was downright slow, but we did hear some loud “crashes” on white patterns throughout the evening float. Near the end of our journey, I finally hooked into a big fish that turned out to be a 24-inch brown. This pig made all of the effort worth our while, and we both loaded up the boat with smiles on our faces.

There are plenty of good fish out there and almost always, it takes the patience of a saint to fool one. Every day is different on these rivers due to the dynamic and unpredictable nature how these tailwaters operate, but the fishing still remains excellent wherever one decides to wet a line. Although most of the browns on upper Lake Taneycomo have retreated back to their primary residences, there are still a few around, and some big rainbows are starting to stage for their upcoming spawning run. There will be many great days over the next month, and like I mentioned in my last report, “now” is still a great time to fly fish the White River, the Norfork Tailwater and Lake Taneycomo.

Feel free to visit us on Facebook, If you really liked this article, +1 above – check us out at +flysandguides (Google+) or send us a tweet with a question or just to say hi. Check out the Fly of the Month! You can also learn more about Lake Taneycomo Fishing Reports and other fly fishing tips by subscribing to our newsletter!