I guided a couple guys a few days ago on and I must say, the fishing on the Norfork river is in as good of shape as I’ve seen it in a long time – especially with respect to the cutthroats. There are nice cutts everywhere in the middle section of the tailwater. The one downside to fishing the ‘Fork right now is that the boat ramp at the dam is closed (again) for some sort of construction, so we were not able to float the whole river. Luckily, the water stayed low all day and the trout were in a feeding mood, so everything worked out. 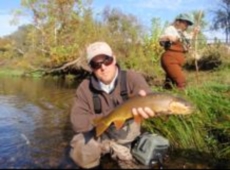 And honestly, it’s nice to not have to mess with the boat in low water conditions all the time. The Norfork does not have a bunch of good spots to fish from a boat when it’s down, anyway, so we were going to be primarily wading, even if we had been able to put the boat in. 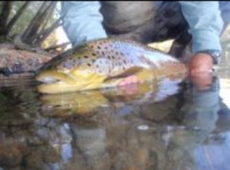 We started at the dam and the bite up there was pretty slow. This was likely due to the fact that the oxygen levels are somewhat low within a mile of Norfork Dam, and there wasn’t any wind blowing yet to help our presentations. It didn’t take long before I decided to try another spot, so we quickly packed up and drove to the Ackerman/Handicap Access. The best water is upstream of the parking area, and I must admit that we walked a pretty decent distance until we got to where I wanted to fish.

But I had an escape plan if the water came up, and I called the dam ever 45 minutes to see if there were any changes being reported (do not trust the message to be “real time”, though). In general, it is best for those who are relatively unfamiliar with the ‘Fork to avoid walking up past the islands from the Ackerman Access. After that point, it’s a 50/50 proposition as to whether you will be able to get back to where you are parked and guys have had to climb tress before to avoid rising flows. So, always be watching out for any change in current speed during low water.

Our hiking efforts ended up paying off and it was a great day of fly fishing on one of America’s best trout streams – it’s nice to be able to say that again. Nymphs like scuds, sow bugs and midges proved to be the best producers, but we also threw some small dries and the occasional egg imitation. We primarily fished blind in some of the deeper runs in the catch and release area, and the action was steady throughout the afternoon.

As mentioned above, the cutthroats were abundant, and they really fought hard for a species not known for always giving ‘it their all’ in battle. It was one of those days that can make up for several tough days, and in my fly fishing dream world, the Norfork would always offer up such prime conditions and active fish every time I made the trip over there; but since this river is known for its inconsistency, I relish the times when everything comes together perfectly on that special piece of trout water.

Yesterday, I decided to check out the Current River a couple hours northeast of Branson. The headwaters of this stream are in Montauk State Park, and like the other Missouri trout parks, there were plenty of stocker rainbows. A friend and I primarily fished the upper three miles on foot, and while the Current is a beautiful place to fish, there are so many better spots to fish in the Ozarks than this smallish waterway, so I doubt that I will be driving so far for trout fishing in the Show Me State again anytime soon.

We were hoping to see some browns in decent numbers, but the water was skinny and we only spotted a few. Still, it was an overall fun day, and I always enjoy seeing and experiencing all of the unique fisheries that the Ozark Mountains have to offer. The bite was pretty good, and those who like to fish dries would really get a kick out of this water.

Look for the newsletter in the next day or so, and I do apologize for the delay. It’s been hectic around here, like always. There is good fishing to be had anywhere and everywhere in the Ozarks right now, and what an amazing year it’s been on the White, the Norfork and Lake Taneycomo.

Beside the slight “lull” in the beginning of October, the fall action has been some of the best that I can remember. I don’t say this a lot because I want to remain credible at all costs, but NOW is the time to be down here (or up here, depending on your geography). Please don’t hesitate to call or email me if you have any other questions. 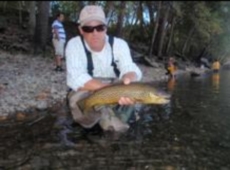 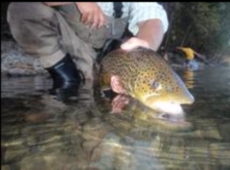 Feel free to visit us on Facebook, If you really liked this article, +1 above – check us out at +flysandguides (Google+) or send us a tweet with a question or just to say hi. Check out the Fly of the Month! You can also learn more about fishing on the Norfork River and other fly fishing tips by subscribing to our newsletter!