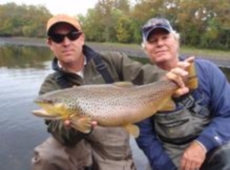 Although mid October is generally considered a great time to wade right below Table Rock Dam on Lake Taneycomo for trophy brown trout because of the increased odds of hooking into a fish of a lifetime, ethical fishing strategies need to be considered. The prospect of finding loads of easy-to-catch trout also brings out the worst in some fly fishermen with respect to unethical behavior. Now that the word is ‘out’ regarding the start of the annual brown run, and many big fish are beginning to stage near the hatchery outlets, such a seemingly tiny nugget of information has brought hoards of anglers out of the woodwork. A dramatic influx in fishing activity not only negatively affects the tranquility and productivity of the fishing experience, crowding and selfish behavior is also detrimental to Taneycomo’s fragile and limited spawning habitat. These are several of the reasons that the fishing below the dam has been slow over the last week or so.

Before the brown run became extremely popular in the mid 1990’s, it was not uncommon to have acres of prime water wide open, and 90%-plus of the trout found throughout the first mile of water below the dam were browns. This discrepancy was an example of how a large population of dominant trout is capable of ‘displacing’ the weaker, “egg-stealing” rainbows that congregate below the spawning beds (aka “redds”). It was common to see brown trout in the ten to fifteen-pound range caught [and often harvested], and twenty-pound fish were fairly common up until the late 1990’s. Most of the real big boys would hang out below the first three hatchery outlets, but pods of staging behemoths could pretty much be found anywhere from the Rocking Chair Hole all the way up to the dam. Over the last ten years, the dynamics of the brown trout spawn on Taneycomo has changed drastically, and even though there are still plenty of pigs just waiting to be caught, the fishing itself is not even close to how it was during the glory days of the past. The slot-limit regulations have worked ‘too’ well in many ways, as there are now so many nice rainbows below Table Rock Dam that the browns are not able to completely take over and spawn in relative peace. I consider the 1997 slot-limit a step in the right direction, but the improved rainbow trout fishing has subjected the fishery to greatly increased numbers of annual angler hours, and the year-round presence of rainbows seems to have made the browns much more nervous during the spawn. Consequently, they feed with far less frequency than what anglers became accustomed to before the “word got out”. Also, the fact that “triple digit” numbers of fishermen wetting a line right below the dam has practically become a daily (and nightly) occurrence, fishing during the brown run is just not as much fun as it used to be. 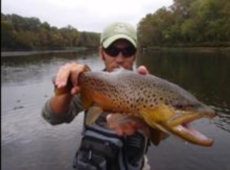 Catching trophy brown’s ethically is what Jeremy Hunt excels at.

Of course, there are many “hero shots” of big, spawning browns being posted on Lake Taneycomo and White River Basin Web Sites, but many of these images are a result of unethical fishing methods and photography practices that put further strain on fish that are already stressed out from the trials and tribulations that go hand in hand with an over-publicized brown trout run. Try and pinpoint the exact area of these recently posted big trout pictures to garner an idea of the exact spot where these fish were caught. As I’ve mentioned quite a bit recently, fishing within 50 to 100-feet of the hatchery outlets number one and number two is not a sporting method of fly fishing. Rather, the fish are so stacked up in these small areas because of the increased current from the outflow coupled with the brown’s instinctual urges to make the annual return to their nursery waters. Many of us have gawked over the years at the site of so many big browns located in just s few small spots. Actually, fishing for these stacked trout is not part of a “fair chase” in the least, and repeatedly drifting nymphs through the same tiny runs quickly becomes boring. I’m not going to throw out any percentages that claim to be 100% factual, but I would bet that a high number of the obviously spawning brown trout ‘proudly’ displayed on some Web sites were indeed foul-hooked. Fish that are hooked in their fins, tails and the side of their bodies are forced to fight much harder than fish hooked in the mouth, and it does make me feel shame that so many folks think that crowding in the small areas in and below the outlets represents a sporting aspect of fly fishing in any way.

There is little that I can say or do that will stop visiting and local anglers from “shooting fish in a barrel” in the hatchery outlets on upper Lake Taneycomo besides trying to educate as many people as possible through my Web site; setting a good example as both a sportsman and as a guide is another way in which I try very hard to spread the word. You will never see my clients (or me) get caught up in the fray of beating up on these precious brown trout merely for personal glory. When I do fish the dam area during the day or at night, I mainly focus on the deepest water that I can find, and if I do venture towards the outlets, sight-fishing for cruising browns is the only way I’ll fish any area even remotely close to the outflow. There are no written rules when it comes to “how close is too close?”, but as a personal code, I look for areas where the fishermen start to thin out and are no longer wading right next to each other – then I will work well downstream from that point. But in general, I have been having much better results fishing below the boat ramp using my drift boat as a means of getting into areas that see almost no fishing pressure. This allows my customers (and I) to get into all-day action and escape the crowds at the dam. 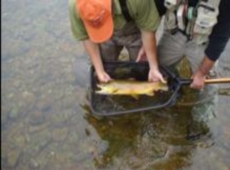 Think about the future of fly fishing before fishing the outlets.

It does disappoint me when I see other guides aggressively staking out the few outlet spots where the browns are stacked in “like cordwood”. These few areas are exponentially easier when it comes to hooking up with a decent brown than anywhere else during the runs, but teaching others how to fish the outlets is simply not the right way to create a new generation of conservation-minded and unselfish anglers. I could care less about the apparent ‘success’ and misleading posting of pictures proudly displaying all the big fish that a few guides and their customers are landing – there are always going to be ‘professionals’ who will do whatever it takes to make themselves look good while giving their clients the illusion of a benchmark achievement. What does bother me is that guiding is a privilege and not a right; so I do wish that everyone who utilizes a public resource for monetary gain would understand that they are role-models and stewards of their fisheries. It is important to always leave the river in better shape than you found it in;whether that means picking up trash or avoiding fishing for shallow-water trout that have become increasingly susceptible simply because of their reproductive instincts. Fly fishing is all about having a good time with friends, learning about conservation and new angling techniques, and catching some nice fish in the process. I can’t imagine that rubbing elbows with the masses while foul-hooking vulnerable trout in the outlets qualifies as a quality experience indicative of the wonderful aspects of our sport. For those considering hiring a guide on Lake Taneycomo , do yourself a favor and ask plenty of questions regarding where and how you plan on fishing. There are Ozark guide services well-suited for virtually every type of fly fisherman, so it is critical to let your prospective guide or outfitter know what you expect out of your time on the water.

***The Mid October newsletter will be sent out this week, and it is loaded with information on late fall and early winter fishing on the White River, the Norfork Tailwater and Lake Taneycomo. My goal is to educate anyone who is interested in learning about every aspect of these enjoyable and unique fisheries, and part of this process is reflected in my passion for sharing as much information as I can regarding seasonal changes in fishing trends, fly selection, old and new fly fishing techniques, and anything else that pertains to the ‘addictive’ Ozark fly fishing experience. Please let me know if you ever have an idea or topic that is of particular interest – it may just make the newsletter or possibly become an article on my site.

Feel free to visit us on Facebook, If you really liked this article, +1 above – check us out at +flysandguides (Google+) or send us a tweet with a question or just to say hi. Check out the Fly of the Month! You can also learn more about ethical fishing strategies and other fly fishing tips by subscribing to our newsletter!