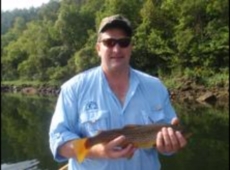 Catching big pre-spawn brown trout has a lot to do with the water conditions.

Since my last report, I have been primarily fishing the White River and Lake Taneycomo. The action on the White continues to be excellent with regards to catching lots of nice fish, but the hopper bite has been dependant on water conditions for the particular day. If Bull Shoals Dam is not ‘on’ or just running one unit, most of the fish are feeding on nymphs below the surface. My theory is that the majority of hoppers get washed into the river when there are at least two units running and if you get lucky enough to be fishing on a day when flows are in the 3,000 to 5,000 cubic feet per second range (around two units), expect the top-water action to be incredible. In years past, the catch and release area below Bull Shoals Dam has been a great place to fish big terrestrial patterns, as the dynamics up there (shallow water/nice fish) make for perfect conditions when there is a decent amount of current. In fact, one of my best days up there occurred when there were four generators operating on a warm day in early October. A boat really helps anglers stay on active fish, but if flows are in the one or two-unit range, stalking big trout from the bank is also a very productive option on the upper stretches. Further down river will also be excellent during September, and for fishing on the surface, concentrate on fast water or “diamond chop” with plenty of drop offs where big fish feel comfortable feeding unabashed. 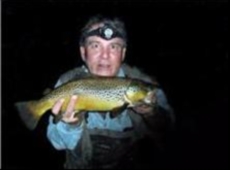 Big sow bugs, scuds, Zebra “style” Midges and San Juan Worms are doing the trick when nymphing, and this is the time of year when lots of browns start moving around in an effort to get closer to their annual spawning grounds. Even though brown trout on the White do not typically start to dig out redds until November and December, the preceding two months are excellent when it comes “chancing” into a behemoth making their procreation pilgrimage – browns often feed heavily before they spawn. The brown run on the Norfork normally occurs at the same time as it does on Lake Taneycomo (October through early November), and this means that right now there are big fish staging in deep water downstream of the spawning grounds. The catch and release area on the Norfork is a good place to hunt big browns, but please be aware that it is not ethical to target actively spawning trout. This ensures that these shallow-water fish are left alone to do “the deed”, thus increasing the wild trout potential on the river(s). Also, it is unfair to take advantage of spawning trout because they are in a vulnerable position as a result of their instincts – pounding fish on redds is far from sporting, so always be aware of where you are fishing. If you must fish near the traditional spawning grounds on any river, look for pre-spawn and post-spawn trout in slow pools adjacent to the beds. For those not familiar with the term, a “redd” (or bed) is typically a spot where the gravel has been cleaned by spawning trout in order to create ideal conditions for a successful spawn like egg survival, fry survival and nearby cover to protect small trout from predators.

Forecast for This Year’s Brown Run on Lake Taneycomo 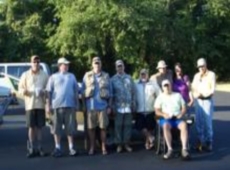 Jeremy Hunt feels giving back to those looking to learn how to fly fish is very rewarding.

In Branson, talk is already turning to what this year’s brown run on Lake Taneycomo is going to be like. Many folks are worried that any significant precipitation will make wading difficult. In reality, the absolute best time to run into a huge Taneycomo brown is while drifting from a boat. This is because power generation alleviates a significant portion of the typical fishing pressure below Table Rock Dam, and the bigger fish feed more consistently when they are not being hammered incessantly. So like with many things in life, one person’s nightmare is another person’s nirvana. If it were up to me, I would like to see a steady mix of high and low water during the brown run, as this keeps the fish from getting beat up on a daily basis, while still allowing those intent on wading the chance to see what all the fuss is about. With Table Rock Lake just two feet below power pool, the chances of steady water releases in October are about 50/50, but regardless of the prevailing conditions, the spectacle of Taneycomo’s brown run is worth checking out if you are interested in the chance of hooking into the “fish of a lifetime”; there may be no better place in the country to hook into a trout in the seven to twenty-pound range. Guide trips with Taneycomo Trout in October are starting to fill up, so be sure to book as soon as possible if the fishing this legendary brown trout run has piqued your interest. The action normally starts picking up in the dam area at the end of September, and all of October is “prime time”. 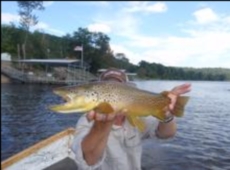 As a guide, I feel that it is very important to give back to my ‘home’ fisheries in any way I can, and it is always an honor to be involved in events where I have the chance to introduce people who have never fly fished to the sport. Several weeks ago I participated in “Project Healing Waters” which gives those less fortunate the chance to spend a couple of days on the water while learning the finer points of trout fishing with a guide. I took three guys out on Taneycomo for this event last week and we caught scores of chunky, hard-fighting fish. A seven-pound [plus] rainbow was the biggest trout taken during this outing (by Chuck who operates Anglers and Archery), and the Norfork and White are also loaded with trophy fish of this caliber or larger. Everyone had a great time, and I look forward to being a part of Project Healing Waters for many years to come. 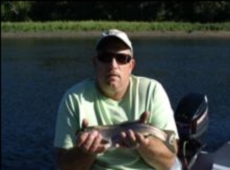 Feel free to drop me a line if you have any questions about the brown run and what to expect. Every tailwater I guide on is in great shape and a lot of anglers will probably break their personal best brown trout this fall and winter. The rest of September will definitely offer up excellent trophy fishing, and the rivers will be far less crowded during this month than they will be in October and early November.

***Also, for those expecting the newsletter, it will be coming out in the next week – look for a detailed article explaining how to have a negligible negative impact on the fisheries during the spawn, along with plenty of other pertinent and interesting material.

Feel free to visit us on Facebook, If you really liked this article, +1 above – check us out at +flysandguides (Google+) or send us a tweet with a question or just to say hi. Check out the Fly of the Month! You can also learn more about fishing the White River and Lake Taneycomo and other fly fishing tips by subscribing to our newsletter!