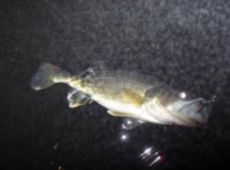 Night fishing on the White River with Jeremy Hunt.

I just wanted to put up a report about a guide trip that turned into a LONG boat ride yesterday on the White River. My clients were Fritz, David and Adam; all accomplished fly anglers who could throw an indicator rig 60-feet with remarkable accuracy. We didn’t put in until 1pm (Bull Shoals Dam) and we started our way down river. Guides are not perfect, and I decided to try and make it to Rim Shoals by nightfall – more on that miscalculation in a bit.

Well, the first issue we ran into was that the water was dead low, but three-units was on its way. We bounced back and forth between clear and trashy water, catching fist here and there, but it was slow going, and it was 8pm when we finally made it to Wildcat Shoals…..keep in mind that at that point, we were still twelve-miles from our take out where my vehicle was parked. 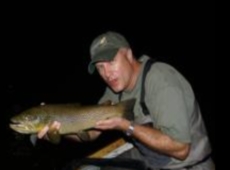 Moon phases always play an important role in the quality of night fishing.

These guys were the adventurous types and they were ready to take on the challenge of night fishing on the White. The water was dropping, but there was still plenty of “tailwater”, so conditions were pretty decent for throwing streamers. I rigged up all the rods with sink-tips and lightly weighted, deer hair flies. I like using this setup because the fly doesn’t get hung up very often and it swings naturally towards the surface at the end of the presentation. A full moon was in effect, so it was eerily light out there, but as I’ve learned over the years, moon phases always play a distinct role in the quality of the fishing, and bright conditions are not always desirable. 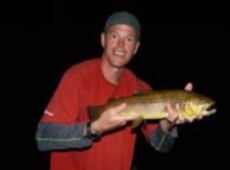 Even good anglers find a challenge fishing with heavy rigs.

What I found surprising was how much difficulty these good anglers had when switching to heavy rigs – it took awhile before anyone’s cast made it past the 25-foot mark. It is critical when using sink-tips or full-sinking lines that fishermen slow down their casts and the forward cast should not be initiated until they feel the “pull” of the line once it straightens out from the back cast. The distance my guys were capable of casting proved to be far enough, and we ended up landing a 20 and a 22-inch brown, along with many other fish. The biggest one came while we were anchored and swinging flies, and I utilized this strategy every time I was in an area where I knew there were big fish stacked up; otherwise, we would drift and strip big articulated streamers in an effort to cover lots of water. The area around the Hurst Hole proved to be the most productive zone. In fact, we hooked into something huge there. It was most likely a very big brown trout, and it ended up breaking the 15-pound test we were using. I would have loved to see what a fish capable of such power looks like, as you never know what you might hook into on the White River. 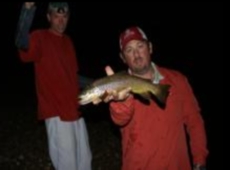 After a bunch of rowing, we arrived at Rim Shoals at 2am. It was quite an adventure, and this excursion gave me the idea to offer a “hardcore package” for guys who want a marathon-type experience where we fish all day and all night. It will cost more, but this type of trip is the best way to get a chance at a huge brown or rainbow. 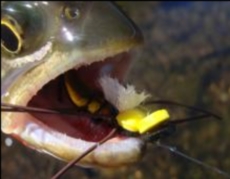 Streamer fishing at Bull Shoals in the White River.

On a separate note, I was guiding at night on Taneycomo a few days ago, and one of my clients landed a three-pound walleye. This type of catch is fairly common on the White and Norfork, but it’s kind of a mystery as to how this fish ended up below Table Rock Dam. It wasn’t big enough to be a product of all the flooding in 2008, and I’m pretty curious as to what the real story is behind this extremely rare feat. I’m heading down to the White to fish on my own tomorrow. The Southwest Power Administration is predicting that Bull Shoals will be running good drifting water all day, so I’m really hoping to get in on the hopper action I’ve been “forced” to watch from the “sticks” over the last few weeks. Days off have been rare of late, but I’m so addicted to the White River top-water bite that I can’t imagine a better way to spend my free time.

Feel free to visit us on Facebook, If you really liked this article, +1 above – check us out at +flysandguides (Google+) or send us a tweet with a question or just to say hi. Check out the Fly of the Month! You can also learn more about the White River and other fly fishing tips by subscribing to our newsletter!