Norfork is
Getting Better

Fishing has still been decent, but we are still having some higher flows and the lakes are still hovering around 2-3 feet above pool on most of all four tailwaters. It really pays off to be flexible when hiring Fly’s And Guides, because we go where the fishing is best. This past week we were able to hit the White during low water while Taney was running.

Wildcat is loaded with small rainbows, but if your looking for some big browns they’re there too. I’m not seeing as many which leads me to believe the browns are on the move. One day you’ll see them and the next day you go back, they are not there. It’s fun finding big cruiser, but you got to be stealthy if you’re going to hook up with one of these 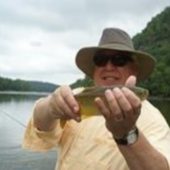 It’s exciting to see these tailwaters in good shape and from what I’m hearing Norfork is getting better, but the dissolved oxygen will still be the big problem for the river and it’s going to take time to see it get back to the what it use to be. These next few months are going to be the better months for big fish migrating in from the lower White into the Fork. I’ll probably fish it next week before I take clients because I need to check it out for myself just to make sure. We are still seeing some sulphurs on the White, but the cloud cover has kept most hatches minimal this week.

This is the time to throw the dry fly side of this pattern because the fly won’t blend in with so many. We are having lots of luck fishing size 16 emergers just under the film as well.

I haven’t had a lot in the way of hopper action, but I don’t think the conditions have been the best so we didn’t get into anything major in the way of big browns, but I know they are looking up so I’ll have to wait see it another day.

Taney is running two units for most of the day and to really get the best day in a drift boat we are keeping it to half days unless you can go down to fish Arkansas’ tailwaters. Catching lots of fish on midge patterns along with beadhead patterns like pheasant tails, scuds and sjw in cerise. Beetles haven’t been as good, but I haven’t fished up top where I’ve had the best luck. I’m hoping I can get out and fish this bluff with some bigger dries, but I need them to run one unit like they say they are in order to get the best results.

Feel free to visit us on Facebook, If you really liked this article, +1 above – check us out at +flysandguides (Google+) or send us a tweet with a question or just to say hi. Check out the Tying News & Updates! You can also learn more about tailwaters and other fly fishing tips by subscribing to our newsletter!