Still having low water
at Taneycomo in the morning

It’s been hot, but it’s been great fishing on Taneycomo. I wasn’t able to make it over to the White River this past weekend. I decided to talk my client’s into fishing Taneycomo since this was a guaranteed for low water most of the day. I’m sure they were glad they did. Catching anywhere between 50-100 fishing before cranking on the generators is real common these days. And with most these rainbows averaging 16-18 inches, I’m getting more excited about what’s in store for this fishery. I’m hoping to see a big brown run this year and I’m pretty certain we will have one. 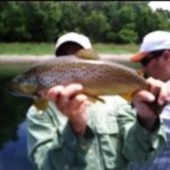 I bet these browns are going to big in numbers and in size since they haven’t had much pressure in a couple of years. Even the browns at the White are a lot bigger in size on an average due to their heavy generation schedules in the previous years. All I can say is these rivers are ready to be fished so get down here ASAP.

I spent the day fishing Taney yesterday and was able to hook another decent brown in the lower sections. This makes two nice browns caught this past week. I haven’t heard of too many browns being caught in the18-20 inch range, but there are some being caught in the 12-15 inch range up top. To be real honest, I’m seeing a lot of the bigger ones down below about two miles downstream. When I was fishing the falling water around 6pm I noticed a lot of dry fly activity, or should I say fish taking stuff of the surface with aggression.

They weren’t really feeding on nymphs or anything on the bottom in this water, but dry fly fishing was hot. We managed to hook several on dries. This might be the pattern for Taney right now so don’t get frustrated if the bite is slow during the drop. Go to dries and see what happens. The bites already slow so you don’t have much to lose with experimenting with Chernobyl type patterns. There’s a lot of big rainbows to be caught and they do like big dries if you fish them right.

I should have a followed up “live” report sometime this week that will explain more in depth about dry fly fishing. It should be turning on for a couple of months, same with the White River. Hopper season is right around the corner, but we need lower water to be able to get their attention.

What’s NEW on the site

Like I said in the reports, I’m creating a new page called 3D reports. It’s built, but were still in the process of getting it complete. Also, the how-to-step fly that was recently uploading called the Peanut Envy will have the instructions completed real soon. You can go the Circus Peanut steps to get a basic idea because both are tied pretty much the same way. Other then that, I’m just to busy right now to do anything else. The one thing that always bothers me though is to do more with up loading new patterns for you guy’s to tie. Hopefully this fall I’ll be able to focus more attention on the tying pages. I haven’t forgot about you tyers, stay posted. My goal is to have another 100 or so by the end of this year. 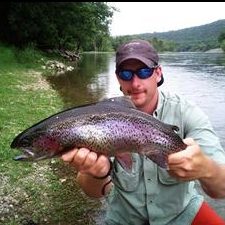 Feel free to visit us on Facebook, If you really liked this article, +1 above – check us out at +flysandguides (Google+) or send us a tweet with a question or just to say hi. Check out the Tying News & Updates! You can also learn more about great fishing on Taneycomo and other fly fishing tips by subscribing to our newsletter!