Chasing the lowest water around in search of the hottest bites 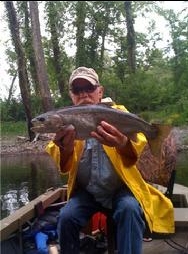 I just got through covering in my newsletter how this year’s May fishing is going to be different – and in a better way for fly anglers – than it has been in many years. Any one of the three dams that I normally fish below are offering up medium flows to dead-low water at any time, so in some situations, we find ourselves fishing two different areas on the White in the same day. By remaining in contact with the dam, we have been able to stay ahead of any water releases, and the fishing has been simply superb on all three of the tailwaters.

My guiding schedule has been swamped of late, and I find myself in the midst of another significant Taneycomo and Arkansas run of days. I love guiding when the fishing is this good – I still have some very good spots open right now, but I’m getting calls and emails about May trips daily. The word is out: we are in the midst of something special in the Ozarks this year, and in all honesty, the quality of the fish in the rivers will only increase as we go through summer. 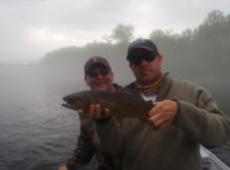 Jeremy Hunt and his clients fished out of the boat on Taneycomo to catch this large Rainbow.

The first day in this string was last Saturday, and I decided on Lake Taneycomo – water levels were in the one to two-unit level which is perfect water for slowly making your way down river in a drift boat. Fishing has simply been amazing on these lower flows, and this day was no exception. An afternoon thunderstorm cut things short, but no one was complaining. The following day was a virtual copy of the previous one – we fished light water on Taneycomo out of the boat. We caught and released scores of hard-fighting rainbows in the 14 to 17-inch range, and I have a feeling we hooked into a few bigger ones than that.
iiAfter twelve very inconsistent years on Lake Taneycomo, it is a relief to see the fishery back into the shape that made it famous [again] after the slot-limit enactment of 1997. Midges were the most consistent producers on these days, but almost every nymph technique worked at one point or another.

On Monday, I headed back to Arkansas for a couple of days on the White. Currently, the dam is operating “12 hours ‘on’/12 hours ‘off’ – this regime allows for fishing falling and low water all day long. Wildcat Shoals had been hot, so we started out there…and we ended up there, if that says anything. This was one of those dream days when the fishing was as good as it gets. The morning started out fishing well with caddis nymphs – this seems to be a good strategy when the hatch is light. By early afternoon, the hatch quickly became too much, and we encountered literally blizzard conditions at times. When there is a ton of natural food available, it can be very difficult to compete with the sheer number of insects on the water, so I like to shift gears and show the fish something completely different. On this day, midge nymphs hammered nice rainbows and browns all afternoon. There was some decent wind-chop on the water, and this dynamic really allowed us to stay on top of the action. You know it’s a good day when your client’s complain that they are sore from catching so many trout. 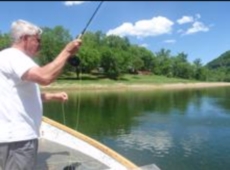 Movning from Wild Cat to Rim Shoals saved the day!

It seemed like a logical idea to start at Wildcat again the following day, and this decision ended up showing us all how quickly trout behavior can change. Conditions in the morning were identical to the day before, but it was a struggle to catch fish – our production was down 70%. We hoped that some wind chop would develop during the morning, but when it didn’t, it was time to search out a new spot. I quickly relocated to Rim Shoals, and this move most certainly saved the day. The water was still falling slightly at Rim, and it was obvious that things were going to be different, as our first two drifts resulted in several healthy rainbows landed. We mainly drifted the main hole, but we also worked some of the shoal areas. Midges were still the ticket in the afternoon during the big caddis hatch.

How are the White River and Lake Taneycomo Fishing?

Just showing me how well the White River and Lake Taneycomo are fishing, the last four days also illustrated how difficult it can be on these rivers to stay in tune with the fish – there are just so many different dynamics at play to try and predict anything. Even at times when conditions appeared perfect, the bite would end up being slow; and vice-versa. There is no such thing as a trout fishing “sure thing” in the Ozarks, and these rivers will keep a diligent guide on his toes all day. The caddis hatch also displays haw frustrating the timing aspect of fly fishing is. Right now is offering up insane caddis hatches, but they are so heavy that nymph techniques are pulling more fish than dries. There are only so many windows of opportunity in the sport, and there is such an element of luck when it comes to being at the right place at the right time.

Even though the caddis hatches are wild on the White, dry fly action should improve if something happens with the water or the weather that reduces the volume of this emergence – it’s all or nothing right now, so look for sulphurs to provide a more realistic chance of allowing your fly to compete with the naturals. There has been quite a bit of low water on the Norfork since my previous report, and we hope this trend will continue throughout the month. One of the many reasons why the Norfork is a dry fly fisherman’s dream-stream in low water is that the hatches are less thick than on the White. A perfect hatch on the Norfork will consist of a smattering of sulphurs, caddis and crane flies that hatch steadily throughout the afternoon in soft riffles. Again, the Norfork is just starting to pop, and there is a solid month ahead of unprecedented dry fly opportunities –barring any unforeseen changes, of course.

The heavy flooding of the Tennessee Valley did not bring us any rain, so we dodged a bullet on that one. Lake levels are just a few feet high, so be sure to understand that just about any type of water-release is possible. Brown trout are really doing well as a result of minimum-length regulations implemented last year, and reports of 5 to 10-pound fish are common. If anyone out there has been putting off a trip to the White River Basin because of high water over the last 4 years, start planning now for a quick-trip. The wonderful flow conditions are rare enough for spring; but anglers also will be fishing to trout that haven’t been this big – on average – in many years. As mentioned: trips for May and June are booking steadily, but there are currently quite a few good days available. If you have any questions, never hesitate to drop me a line. But seriously guys, we are in the midst of the fishing we had hoped would develop since a low-water spring looked like a remote possibility in early February. Opportunity doesn’t always knock on the White River System, but when it does, always answer the call.

Feel free to visit us on Facebook, If you really liked this article, +1 above – check us out at +flysandguides (Google+) or send us a tweet with a question or just to say hi. Check out the Tying News & Updates! You can also learn more about fly anglers and other fly fishing tips by subscribing to our newsletter on the right hand side of the page!