Searching for a good bite during a time of transition

The last five days I have spent on the water would make anyone considering being a guide give the idea a second thought. When fishing is good and water conditions are manageable, the White River Basin is one of the finest places in the world to fish for trout. Unfortunately, these rivers are always in a state of flux, and fish behavior can change drastically and frequently as conditions change. We did experience some good angling this last week, but we did have to work for everything we caught. Recent rains have brought the high water back, and the fish seem to have been put off by the recent changes. 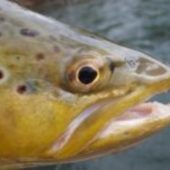 Most city’s residents will lament that if you don’t like the weather, just wait a minute, and the same can be said of the fishing in the Ozarks. Our trout eat as much as any, and there will rarely be long periods of diminished feeding activity. I have a full week of guiding ahead, and I know that productivity will significantly improve as water levels become steady. 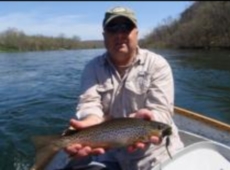 Challenging days of fly fishing drifting on the boat still beat the best days at work.

This ended up being one of those days where we could not catch a break. I guided a father and son named Chris and Shawn, and these guys were just as interested in learning as they were in catching fish. It’s nice to get laidback guys like this on a tough day. We decided to try the White, as water flows were not expected to be extremely heavy. Just two hours after putting my drift boat in at the White Hole Access, a heavy surge of water hit us, and it became obvious that we would be battling tough conditions for the rest of the day. They were interested in fishing streamers, and I commend these guys for putting in a lot of work, but the trout rarely react favorably when the river is trashy. We did manage to hook one brown that was in the 20-inch range along with several rainbows, so the day was not a total loss.

Hoping that April Fools hit us a day early, Shawn and Chris decided to give me another chance. I decided to try the Norfork because the flows had been at the one-unit level for almost a week; this is great floating water.

Of course, with the way my luck had been going, I expected a change – and I got it; the river was up a foot higher than it had been the day before when we arrived. We floated the entire tailwater, and the fishing was tougher than I thought it would be. One of my clients did hook a 20-inch brown, and we had some other takers, but the overall fishing was slow. During the afternoon, I talked them into trying some streamers. This change definitely helped make up for lost time, as we did immediately start to catch fish after we started dead-drifting standard high-water patterns. Everyone still had a very good time, and these tough days make the hey-days taste all the sweeter. 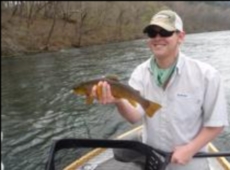 Jeremy Hunt took out Lee and knew it was going to be a good day for streamers since Lee had a bunch of Kelly Galloup’s stuff.

On this Friday I took out a passionate streamer fisherman named Lee Johnston. Lee had a bunch of Kelly Galloup’s stuff, so I knew that we would get along just fine. Targeting trophy fish with streamers was on the agenda, and this guy was eager to do the work necessary to get that one big bite. I decided on the Norfork again, as this river is offering up the best conditions of the three places I normally fish. Again, action was somewhat slow. Streamers again were not the ticket, and Lee was willing to try some nymphs to get a bend in his rod. This switch produced results like it did the day before, and the two gorgeous browns Lee landed were the biggest of his trip. There are some decent fish on the Norfork right now, and this stretch usually heats up in April on all water conditions. 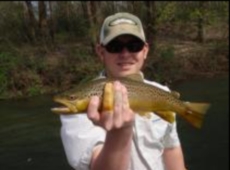 Jeremy Hunt wanted to take Lee to Little Red’s for some browns…it worked.

It was time to take a gamble, and since I was guiding Lee again, we considered trying the Little Red for some browns. I usually will not drive this far to fish, but flows had been good below Greer’s Ferry Dam of late, so I figured it was worth a shot. It rained the whole way down to Heber Springs, and we found the river muddy. There was also more water running than there had been the days before. This was not looking good – the story of my week so far. We threw streamers for the first five miles of our ten-mile float with just one brown hooked. I was forced to scramble again, so we drove to the Norfork to fish reduced flows until dark. Lee was committed to trying streamers for a trophy fish, and we did fairly well with some good ‘bows and a big brown hooked above McClellen’s. Towards the end of the day, a 25-inch brown followed Lee’s fly back to the boat, but it just wouldn’t hit. Although it was a frustrating couple days, this is how it goes sometimes, and that big brown we saw at the end will definitely get Lee back to the area for another try.

Even though the potential flooding far downstream of Bull Shoals Dam on White River, Jeremy Hunt provided some great guiding for his clients.

After the last four days, I was not expecting much; rarely do good things actually happen when you have a defeatist attitude, but I had hit bottom and there was no place to go but up. Because of potential flooding far downstream of Bull Shoals Dam on the White, flows were reduced on Saturday and Sunday. The water was only at the three to four-unit level when we started, and the action was good – if we could keep the wind from blowing us all over the place. Compared to the other trips I had done of late, we smoked some nice fish on this day, but nothing huge was landed. The best action was right on the bottom in slack water.

Feel free to visit us on Facebook, If you really liked this article, +1 above – check us out at +flysandguides(Google+) or send us a tweet with a question or just to say hi. Check out the Tying News & Updates! You can also learn more about the White River Basin and other fly fishing tips by subscribing to our newsletter on the right hand side of the page!