For months, everyone involved in the White River Basin trout fisheries has been closely following the reservoir levels and water release schedules. Heavy fall rains, which are somewhat unusual for this area, pushed lakes up to extremely high levels by early December. The drawdown has taken over three months to complete, and that was without any heavy rainfall hitting the area. Last weekend, everything came together down in Arkansas, as the White River and Norfork Tailwater were dead-low for days on end. It was a great time to be on the water; the fish were eager, the weather was decent (until Saturday) and it was so refreshing to fish low flows again. 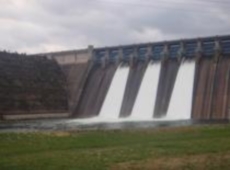 When you live by the sword, you die by the sword, and it was only a matter of time until some decent rains found our watershed. There have been several moderate to heavy rain (and snow!) events since last weekend, and the lakes are rising accordingly. As of this writing, Bull Shoals, Norfork and Table Rock Lakes are all about a couple of feet above power pool, but more rain pounded the region today, so it looks like the low water will be over for a bit.

The Corp of Engineers reacted swiftly to the recent deluge by releasing heavy water right away from Table Rock and Bull Shoals power plants. Norfork is running around the clock at the one-unit level – these flows are perfect for drifting over there, so get in on this dynamic while it is available because they could start cranking at any time. Hopefully, heavy precipitation events will be few and far between over the next couple of months. At this point in time, it will only take one serious storm to get the lakes really rising.

If the area remains dry over the next few weeks, lower water could be a possibility once they run this current floodwater through the system – I will have a tentative timeframe on this after all of the reservoirs crest.

It is really starting to feel like this wet cycle may never end, but I must keep reminding myself that high water is much better for these fisheries than low water is. April is just around the corner, and this month is one of my absolute favorites for fishing all water conditions on our rivers. The winds of March fade into gentle breezes as April settles in, and the big fish – browns especially – just seem to get active.

San Juan Worms in pink, red and brown variations will produce some very good trout when the water is up. Even though talk of the shad kill has pretty much died of late, I would not hesitate to throw a white streamer up by Bull Shoals Dam on the heavy water they are releasing. Shad may still be coming through, but I have not heard of any reports to confirm this.

My schedule is very busy right now – tomorrow I start six days of guiding in a row. Look for April’s newsletter in about a week, and it is going to be a good one. If any of you guys are flexible with your fishing plans, look at water releases over the next few days. If runoff into the White River starts to get heavy, look for a very small low-water window on the White and/or Norfork.

With today’s heavy rains and subsequent flood warnings, I would not be surprised to see flood control operations take over. The Corp does not want to add to flooding issues by releasing heavy water into already swollen waterways.

Feel free to visit us on Facebook, If you really liked this article, +1 above – check us out at +flysandguides (Google+) or send us a tweet with a question or just to say hi. Check out the Tying News & Updates! You can also learn more about the Norfork Tailwater and other fly fishing tips by subscribing to our newsletter on the right hand side of the page!