I just got done with two days of guiding – it was only supposed to be one day, but the fishing was so good, the guys jumped at the chance to do everything a second time. We fished the White River and the Norfork, and both places are still in very good shape with respect to numbers of fish, even though we did not land any lunkers.

We started out up by Bull Shoals Dam on the first day of this excursion. The water was running at about the five-unit level and the river was not nearly as crowded as it had been. 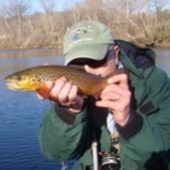 Shad patterns worked pretty well, especially considering how there was no shad or bird activity whatsoever. We also caught fish on Miracle Flies and San Juan Worms. It was a very productive morning, but the action slowed down around noon. Since the water was not dropping as predicted, we decided to go wade the Norfork for the afternoon since the water had been shut off.

Because low water has been so infrequent over the last few years, it seemed like every fisherman within 500 miles was out on the river. I was surprised to find fishing pretty slow right off the bat. Trout were feeding on midges everywhere, but my favorite midge imitations were pretty much ignored. After trying Miracle Flies with limited luck, I got a little ‘tip’ and switched to micro red San Juan Worms. After that, it was on – we smoked fish the rest of the day and everyone, including myself, had a blast.

Norfork has been shutting off mid-morning, so we got a late start on the second day in order to be on the water right around the time that levels are dropping out. The river was even more crowded than the day before, but we had my drift boat – using a float strategy to escape the crowds was on the agenda. Amazingly, there were people pretty much up and down the entire river, but we found some good spots and caught a bunch of fish. I hate seeing our resources so congested, but things will thin out as low water becomes more common. The Norfork has changed so much due to the unprecedented flooding and high water of the last few years, and I found myself having to drag my drift boat in quite a few spots. I did not see a bunch of big fish, but they like to show up and leave with regularity on this stretch. 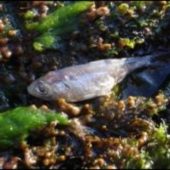 This upcoming week I am planning an expedition float trip on the White River. A friend and I are going to start at Bull Shoals Dam and fish for three days out of the drift boat. We are not sure where we will end up. My intention is to experiment with some new streamer tackle. I really feel that I am on the cusp of figuring out how to consistently hook into really big fish. Upon my return, I will report on the experience.

The March newsletter is about to be sent out, so if you are not on the subscriber list, be sure to sign up – there are spots to do this on a few pages of the Web site (home page being the easiest). There is quite a bit of exclusive content in this issue and there is also a deal on a selection of Miracle Flies. My guide schedule is getting a bit busier, but there are plenty of good days available, so please let me know if you are interested in getting out on the water for a day or two. Right now is a great time to be fly fishing in the Ozarks.

Feel free to visit us on Facebook, If you really liked this article, +1 above – check us out at +flysandguides (Google+) or send us a tweet with a question or just to say hi. Check out the Tying News & Updates! You can also learn more about White River and the Norfork and other fly fishing tips by subscribing to our newsletter on the right hand side of the page!