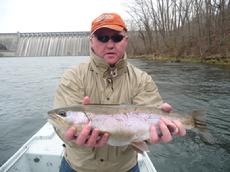 All of the lakes in the White River System continue to hover at levels just above power pool, so the Corp of Engineers has been taking advantage of the situation by running lots of water over the last week. [UPDATE] As of this writing, Table Rock Dam has shut down at noon today. This is the first low water we’ve seen during the day over here for quite some time. Hopefully, a new trend is emerging, and arid weather is predicted for the next week. How ironic would it be to have a dry spring after an abnormally wet summer and fall? I know that there are a lot of guys out there who cannot wait to get into some wading water, and the time may finally be near.

I had a guide trip on Saturday that ended up going for just over a half day. We fished primarily in the catch and release area below Bull Shoals Dam on the White. The weather was gorgeous with temperatures climbing into the 60’s. I could not believe how many boats were on the water up there – it looked like a Jon boat regatta. Every guide in the Ozarks was fishing the area, and there were scores of rental boats zooming around with little regard for other vessels. Only a couple of gulls were sitting below the spillway, and shad patterns were not the ticket. It always amazes me how quickly things change up there. Still, I think the shad kill will pick up again through March, and I will keep everyone “in the loop”.

Despite the heavy river traffic and lack of shad on the water, fishing was very good on Saturday. We caught lots of chunky rainbows on various nymphs and the Miracle Fly was also a solid producer. Check out the picture of the 21-inch rainbow we landed – it’s great to see fish like this showing up again. Most people struggled on this day, as fishing is difficult when flows and pressure are heavy. Hopefully, the ‘new’ will wear off of this zone very soon and we can get back to sane numbers of fishermen on the water. The entire White is loaded with fish and the catch and release area below Bull Shoals is in amazing shape. When all of the attention shifts to the upper White, anglers tend to forget about the Norfork. I think there will be low water on the ‘Fork this week, and that river is always HOT in March. This is the next place I will be checking out, so keep visiting this page for a report. 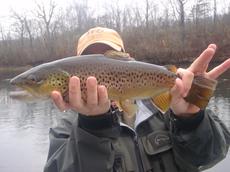 On Sunday, I decided to fish for fun close to home on Lake Taneycomo because the weather was looking ‘iffy’. We got on the water early, and there were four heavy units cranking. The action was very slow, so we decided to get out of the rain and take a fly tying break. In the afternoon, the water had lowered to the two-unit level, and the bite was definitely much better after the flows slowed down. I decided to play around with some streamers, and I even threw a few tandem-rigs with a Zoo-Cougar and Circus Peanut. The action was surprisingly good, which leads me to believe that streamers will work well during certain flow conditions on Lake Taneycomo. Since there is so little structure available over the first couple miles of river below Table Rock Dam, there are very few ‘classic’ spots to throw a streamer, so the fish really need the right water to get into a chasing mood. I did even manage to land a respectable brown with this technique, and that definitely opened my eyes to more possibilities. It will be fun to play around with streamers when one or two units are running on Lake Taneycomo.

The next week should be characterized by wild water fluctuations, as this is generally what happens as the lakes approach power pool levels. I hate to make bold predictions, but I think that there will be some low water this upcoming weekend if the reservoirs continue to drop. When the lakes stabilize at or just below power pool, the best chances for low water below Bull Shoals and Table Rock Dams will be on the weekends, but there will be scattered low-water days during the week, as well – especially once the weather gets mild. Norfork will offer up more wading opportunities than the White and Taneycomo. I am giddy thinking about how the upcoming fishing is going to be on the Norfork.

Check out my blog to read my latest article about how the fish fight differently on each stretch of water. Every now and again, I like to cover interesting topics that do not relate to techniques, so I hope that everyone will enjoy this. Always feel free to let me know if there is an article that you would like to see. My guiding schedule is really starting to pick up, but there are still quite a few open dates in March. This is the month that really kicks off the Ozark trout fishing season, and there are always scores of big fish caught in March. Weather can range from hot to frigid, so anglers must come prepared for any weather conditions. I can remember when Arkansas received 16-inches of snow in early March, and this was immediately followed by two weeks of temperatures near 80-degrees. The weather and trout fishing in the Ozarks is never boring.