The fishing is really, really good right now. It’s time to come to the Ozarks. 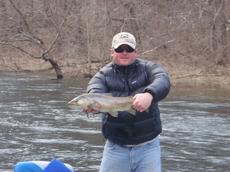 I hope that everyone is doing alright. It’s been a busy past couple of days, as I fished for fun and had a guide trip. Water flows are still persistent, but releases are not nearly as heavy as they were a month ago. The way that the lakes are hovering just above power pool is getting annoying – we just want some low water to fish for a change. For the most part, heavy rains have held off in 2010, so at least we are not seeing really high lake levels. It’s been just wet enough, though, to allow the Corp to run steady water without much affect on the reservoirs.

Even though wading is still very limited, the fishing out of the boat is fantastic right now, and shad patterns are doing really well on the White. Last Friday (February 12th) I decided to fish below Bull Shoals Dam to see what was happening. The bite was steady all day long on white streamers. Dead-drifting a non-weighted fly was more effective than stripping a heavy pattern off of the bank, although I did tag a few nice fish using a Tungsten Dumbbell Double-Bunny in this way. I did meet an angler named Michael who I talked to after I saw that he had a 22-inch brown on, and it turned out that he fooled the pig on a red San Juan Worm. After we chatted for a bit, I got back into a drift, only to realize that the bite had slowed down just a hair. I decided to try something a little different. Since I was already set up for dead-drifting a shad pattern, I dropped a red worm from my streamer. This really worked well, and I caught fish all afternoon on both the shad and the worm. San Juan Worms are really producing, and red variations are what the fish want. Nothing really big was landed on this day, but most of the trout below Bull Shoals Dam are very healthy. The river was not overly crowded, and water levels fluctuated between 5 to 7-unit levels.

On Sunday (February 14th) I guided Tim and Jason on Lake Taneycomo. We faced tough conditions from the onset of this trip, but we did the best that we could. The wind was really howling, and the water was running at a 2.5-unit level. Luckily, the bite was steady all day, and we caught fish on a variety of patterns, including shad streamers and my Miracle Fly. Although we did have some success drifting in the main current, we got into the most action in slack and backwater areas.

Below outlet #3 there was a hot midge bite, and my clients landed several gorgeous rainbows up to 17-inches. In the afternoon, conditions were right for wading around the islands, and both guys did very well. Another fly that worked was this “Jumbo” worm I am tying. This chenille is crazy looking, but the cerise version was quite effective on both the lower White and on Lake Taneycomo.

The fishing has not been this good for years on Lake Taneycomo, and even with the wind working against us, and my clients landed a pretty gaudy number of chunky trout. The fact that they are good fishermen helped out a bunch.

It’s hard to imagine, but I think the fishing we are experiencing right now is just the tip of the iceberg. The really big trout seem to come out of the woodwork in March and April, and already, lots of guys are landing some true trophies. If the water does start to stay low, anglers will have the chance at once-in-a-lifetime opportunities, but it is unclear as to whether this will happen this spring. I have to produce fish regardless of water releases, and I am very much looking forward to whatever the future may hold for the next couple of months, no matter how the water scenario unfolds. There has been little news to report on the Norfork except: more high water. Usually, when people start to forget about the ‘Fork, the fishing will turn on over there. 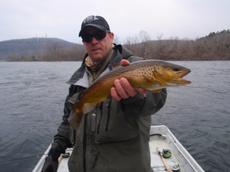 I want to change gears a bit and discuss my intentions regarding sharing a few “close-to-the-vest” secrets. There are some things that I will never reveal on the Internet, but I do want to introduce my Miracle Fly. This pattern is an egg variation tied on a heavy jig hook, and nothing has been a more consistent producer over the last year – it’s really been amazing. I have decided to retail the Miracle Fly individually; along with introducing a new “Spaghetti and Meatballs” box that features the special San Juan Worms I use (including “Y” Worms), regular San Juan Worms and the Miracle Fly. This is the one box you will need to effectively fish high water throughout the year. Because I am not a fly shop, I am unable to sell the materials to tie the Miracle Fly at this time, but Blue Ribbon in Mountain Home has everything covered on that end. What I will say is that the hooks I use on the patterns I sell are hard to find because most jig hooks are very fragile – I need a stout hook to help keep the big ones from coming unbuttoned. Flies from Taneycomo Trout are all crafted personally by me and they are tied exactly like the patterns I use for guiding – I only deal in the real thing tied on the best hooks.

Please check out the Flies for Sale page for more information on my Spaghetti and Meatballs box, and I am also offering a new sculpin box. Shad patterns are hot, so let me know if you need a selection of those before heading to the river. Finally, look for an article to be posted in the next day where I am interviewed regarding the Miracle Fly – I think that this will enlighten a lot of people as to why this is the pattern I tie on when things get tough.
Fishing like what we are experiencing does not occur all the time, so be sure to get out and take advantage. I am here to answer any and all questions.